Spooked by inflation not being temporary.

Following its policy meeting today, the Bank of Canada announced that it would end QE outright beginning November 1. And – unexpected by economists – it moved rate hikes closer, with April 2022 now showing up as the expected date of a liftoff, up from the second half in 2022, with four rate hikes expected next year. 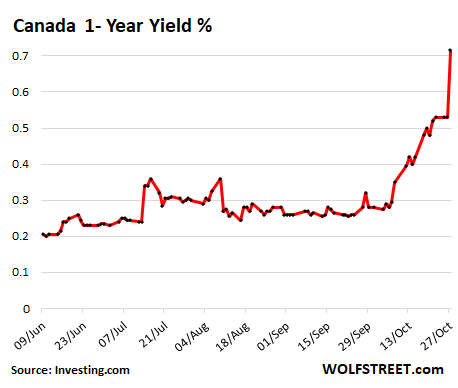 The BoC started tapering its purchases of securities a year ago by ending its MBS purchases outright and tapering its GoC bond purchases multiple times. In the spring, it began to reduce its holdings of short-term Canada Treasury bills and repos. And it ended other smaller programs. 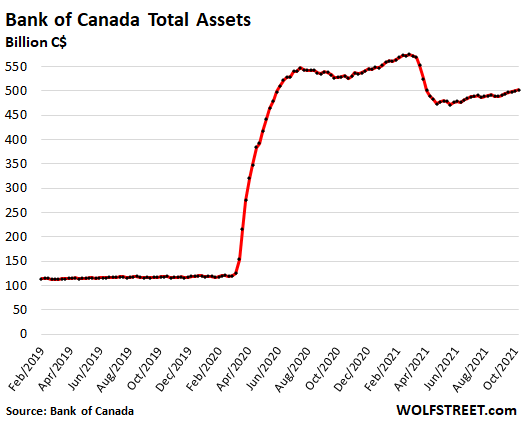 The BoC holds C$426 billion in GoC bonds. Its announcement today said that it would roughly maintain this level for the time being.

It still holds C$17 billion of Provincial bonds, C$5 billion of Government of Canada Real Return bonds (what we’d call TIPS in the US), C$10 billion in derivatives, and C$5 billion of MBS. Other asset categories have already been whittled down to nothing, including corporate bonds, Commercial Paper, and Provincial Money Market securities.

As per today’s announcement, the top red line, GoC bonds, is going to flatten going forward: 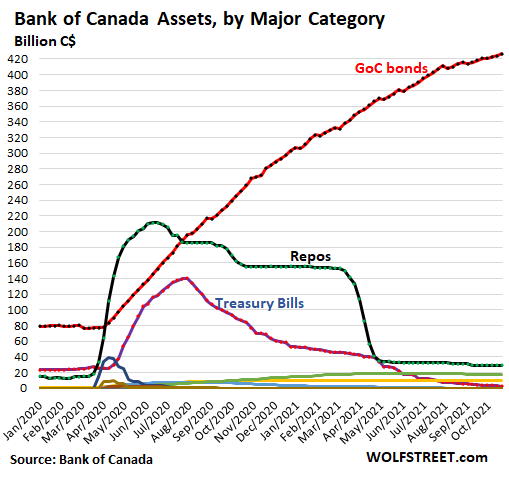 It will buy only GoC bonds. The maturing Real Return bonds will be replaced with GoC bonds. It will buy roughly one third of the replacement GoC bonds in the primary market and two thirds in the secondary market.

The BoC didn’t specify when it would start letting the GoC bonds roll off the balance sheet without replacement to reduce its holdings, which would allow long-term yields to drift higher. The beginning of this roll-off period may be timed to occur around the first rate hike. Allowing long-term yields to drift higher while raising short-term rates would keep the yield steeper. The roll-off also would reverse some of the prior QE. In the chart above, this would show up with the top red line bending downward, as other securities categories have already done.

This is all about inflation not being temporary.

The Canadian Consumer Price Index in September spiked 4.4%, the fastest increase since 1992, and it’s not exactly making a lot of effort at being “temporary,” and this rattled some nerves: 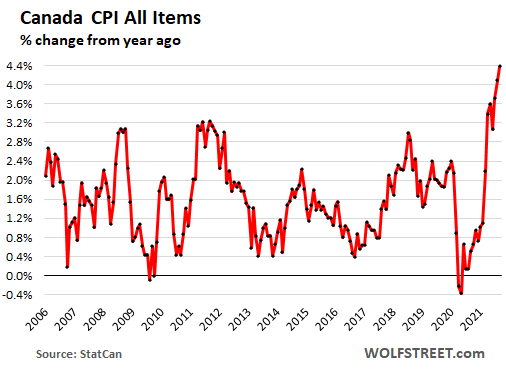 “The main forces pushing up prices – higher energy prices and pandemic-related supply bottlenecks – now appear to be stronger and more persistent than expected,” the BoC said in the statement today.

“The Bank now expects CPI inflation to be elevated into next year, and ease back to around the 2 percent target by late 2022,” it said.

Clearly, the BoC has moved away from the Fed-sponsored theme that this surge in inflation is nothing to worry about because it’s temporary and will go away on its own, despite the massive ongoing monetary stimulus. It seems, only the Fed is still clinging to this hope of “temporary,” though even there, doubts have emerged.

Today’s inflation worries in the BoC’s statement are a hawkish deviation from BoC Governor Tiff Macklem’s observations earlier in October that largely dismissed the inflation spike. So the BoC is now turning to efforts to crack down on inflation by at least removing the monetary stimulus.

This, despite reduced growth, as housing activity is expected to decline faster.

This hawkish tone comes despite the BoC’s dialing back of growth expectations. In its Monetary Policy Report, also released today, the BoC downgraded GDP growth in Canada to 5.1% for 2021, which is still huge, but down from its 6.0% projection in July. Among the factors leading to the lower but still red-hot growth expectation for 2021 were lower exports, softer business investment due to the supply chain chaos, and notably, a sharper decline in housing activity.