Everywhere but San Francisco? Only 11 of the 100 largest cities showed any year-over-year rent declines at all.

But there were only 11 cities where rents declined at all by any amount.

In total, across the 100 largest markets, the median asking rent for 1-BR apartments increased by 11% in October compared to October 2020, and by 11.8% compared to March 2020, according to data in Zumper’s National Rent Report.

These are advertised rents (“asking rents”) for apartments listed at various rental listing services, including Multiple Listing Service. They’re not actual rents that tenants have been paying for months or years. They do not include rents for single-family houses; just apartments.

Asking rents show the current pricing of the market, as landlords see it. Actual deals negotiated between landlord and tenant may differ and may include incentives (one-month free, free parking, etc.), and the effective rents of signed leases could be lower. If a landlord gets too ambitious in their asking rents, tenants don’t bite, and landlord have to cut asking rents – which happened massively and with humorous effect in Newark, NJ, as we’ll see in a moment.

Changes in asking rents reflect the underlying dynamics of the rental market. And these market dynamics differ dramatically from city to city, as we’ll see in a moment. Rents in New York City spiked, but not in San Francisco, were rents lumbered along multi-year lows and are still down 25% from the peak.

As bizarre as it seems, the red-hot surge of inflation as measured by the Consumer Price Index this year to 5.4% in September, which matched June, and both were the highest since July and August 2008 (5.6% and 5.4%), with all four being the highest since early 1991 – well, this red-hot 5.4% CPI was held down by the housing components, which account for one-third of total CPI and are exclusively based on rents.

The two CPI housing components are “rent” and “owner’s equivalent of rent.” They’re based on large-scale surveys of tenants and homeowners. These surveys ask tenants about their actual rent, including in rent-controlled apartments, and they ask homeowners what they think their home would rent for.

They’re both based on rents: the first on actual rents paid, and the second on the homeowner’s perception of the rental market. Combined they account for one-third of overall CPI.

Before the pandemic, these measures clustered around 3.5% but plunged during the pandemic to 2% and below.

Over the past few months, the soaring “asking rents” have started to filter into those two CPI rent measures, and in September, CPI rent (red) increased to 2.4% (from 1.8% in the spring) and CPI “owner’s equivalent of rent” (green) rose to 2.9% (from 2.0% in the spring): 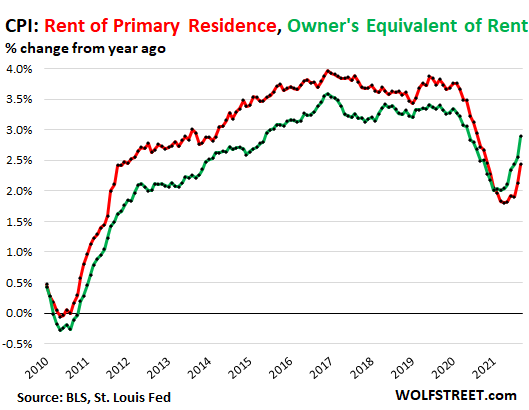 “Asking rents” have to translate into actual rents that enough tenants pay – via new leases signed or rent increases – before they start moving the needle of the CPI rent index, and this takes a while, but it has started to happen.

Going forward, the surging asking rents we see detailed below will further filter into the CPI rent measures over the next few months and next year, and since they weigh about one-third of total CPI, they will move the needle, just when this “transitory” inflation was supposed to fade. And those surging rents will ridicule the Fed’s “transitory” theme of inflation.

The cities were the median 1-BR asking rent surged the most were less expensive rental markets: 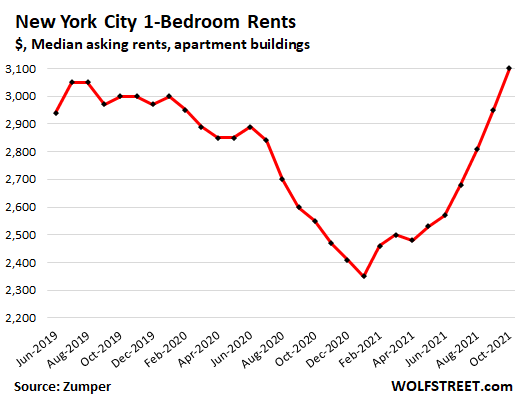 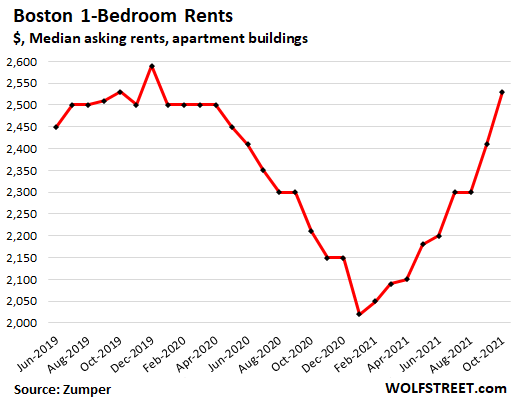 These are the 50 cities, of the largest 100 cities, were 1-BR rents surged 10% to 25% year-over-year. These are massive rent increases in half the biggest 100 cities, and they will move the CPI needle!

In San Francisco, the median asking rent for one-bedroom apartments for October remained at $2,800 for the third month in a row, and was flat year-over-year, and still down 25% from June 2019: 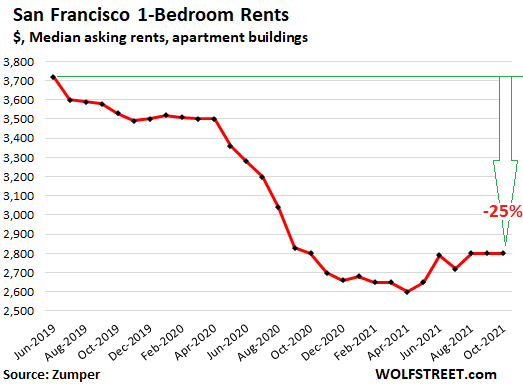 In San Jose, representing Silicon Valley, the median 1-BR rent spiked 5% in October from September, and by 9% year-over-year, to $2,310. But it remained 9% below the peak before the pandemic: 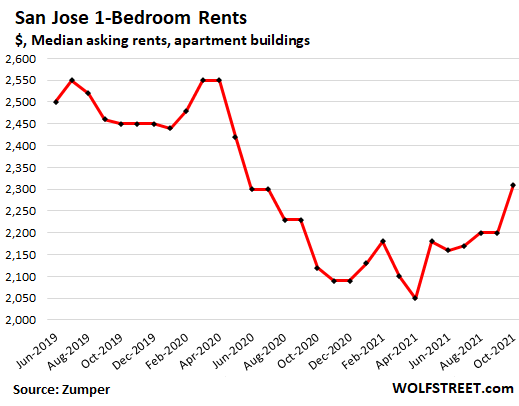 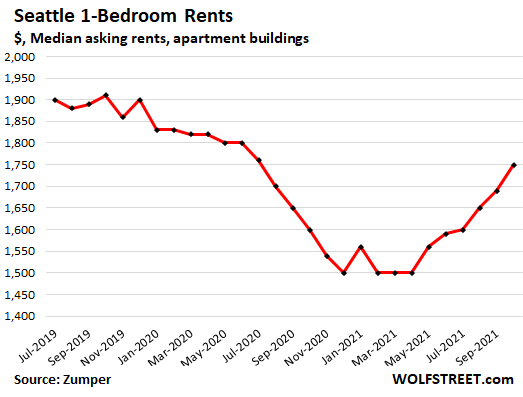 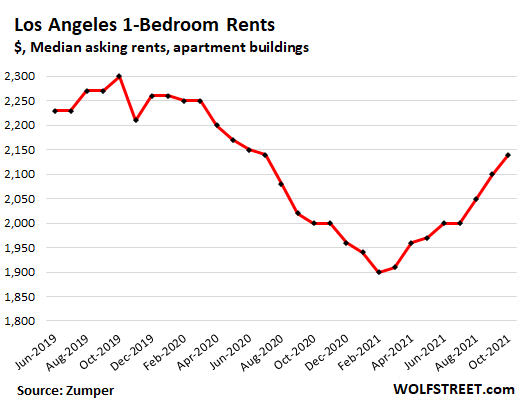 The 11 cities where rents fell year-over-year.

Newark is a case of landlords’ failed aspirations. They were trying to benefit from the exodus of New York City during the pandemic by jacking up their asking rents, thinking New Yorkers would be stupid enough to fall for it. And so they jacked up their rents last year by huge amounts, but New Yorkers didn’t fall for it, and so landlords had to cut their asking rents to get their units filled, and those 1-BR asking rents are now below their pre-pandemic levels: 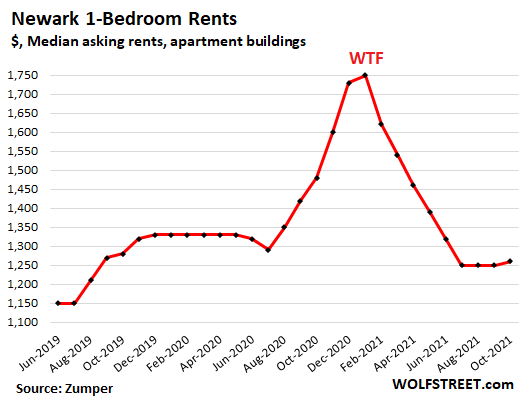 The table shows the 11 cities where the median 1-BR rent declined year-over-year. This includes the Bay Area city of Oakland (-1%):

All of the largest 100 rental markets.

The table below shows the largest 100 rental markets that Zumper tracks, with 1-BR and 2-BR median asking rents in October, and year-over-year percent changes, in order of the price of 1-BR rents (if your smartphone clips the 6-column table on the right, hold your device in landscape position):

85 comments for “Rents Spiked 10% to 25% in Half the Cities in October: How it’ll Push Up CPI Next Year, Ridiculing Fed’s “Transitory” Inflation”