The average transaction price for new vehicles spikes to $41,000.

It has been one heck of a year so far for automakers, with sales surging early in March and April to very high levels, only to get smacked down brutally by the inventory shortages that resulted from the semiconductor shortages that were triggered by the record mind-blowing spike in sales of durable goods more broadly and in the US in particular. All year, automakers have been announcing what now seems like an endless series of temporary plant shutdowns ricocheting around the globe. Vehicle production, now prioritizing high-end and high-margin models, has plunged. Inventories are picked-over, and inventories of popular models are depleted.

Total car, truck, and SUV sales in August dropped for the fourth month in a row, to 1.28 million vehicles, according to the Bureau of Economic Analysis, down from 1.6 million in March when there were still enough new vehicles to sell.

The Seasonally Adjusted Annual Rate (SAAR) of sales, the standard industry measure which adjusts for the number of selling days per month and for seasonal factors, and then converts it to what sales would be for an entire year, plunged by 23.4% from August 2019, to 13.1 million SAAR, the lowest, beyond the lockdowns, since September 2011 when the industry was digging out from the Great Recession that threw GM and Chrysler into bankruptcy: 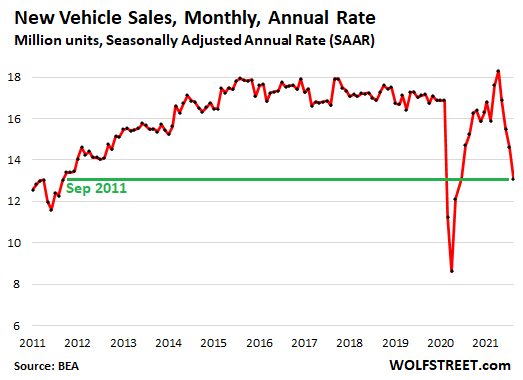 During the Great Recession, what caused the collapse in vehicle sales was a collapse in demand, as new vehicles were piling up by the millions at ports and on storage lots.

This time around, what caused the plunge in sales is the collapse in inventories because the industry is short on chips, and components that contain chips, which nearly all components do. Plants cannot assemble the vehicles when one or two parts have gotten hung up and are missing.

New vehicle inventories on dealer lots have been dropping from record low to record low over the months, and in August, according to the National Automobile Dealer Association (NADA), fell another 5% to a new record low of 1.06 million vehicles.

This amounts to a supply of about 25 days at the current rate of sales, when 60 days’ supply is considered healthy.

As automakers are prioritizing high-end vehicles, and as they’re cutting incentives, the average transaction price (ATP) keeps surging. In August, the ATP reached $41,000 according to J.D. Power estimates, supported also by trade-in values that have spiked by 70% year-over-year, reflecting the mind-boggling price spike in used vehicle wholesale prices and higher-end trade-ins.

This chart shows the ATP for June and December each year, plus for August (green) 2021: 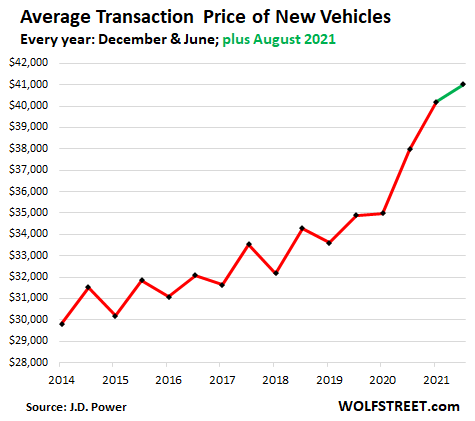 In addition, several semiconductor plants that produced chips for the automotive market where shut down earlier this year due to various calamities: A plant in Japan for over two months due to a fire; and three plants in Austin, two for nearly a month and one for over a month, due to the Big Freeze that hit Texas. These shutdowns added to the backlog.

For example, Ford reported that total sales, including fleet sales, plunged 33.1% in August year-over-year, to just 124,176 vehicles. Retail sales plunged by 40%, with pickup truck retail sales down 36%, SUV retail sales down 30%, and car sales down 85%. Ford sold just 2,369 — nearly all of them Mustangs — having abandoned sedan sales to the Japanese, German, and Korean automakers.

GM and Stellantis’ US brands have also abandoned sedan sales to the foreign automakers. These foreign automakers are still selling sedans, but they also face the shift in what Americans want to buy, which is SUVs, including compact SUVs, pickup trucks, and some vans. Sedans are out — a process that started in 2014 and that I have called Carmageddon since 2017: 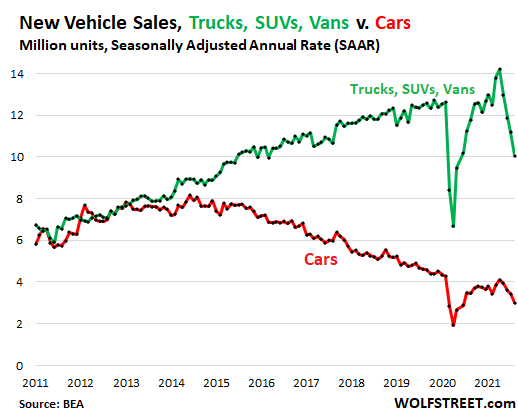 Ford’s harsh declines were due to production cuts and the resulting inventory shortages. Back in April, Ford announced that it could lose 50% of its production globally in Q2 due to the chip shortages.

Now is Q3, and the production cuts continue. At the end of August, Ford said that production of its bestseller, the F-150 truck, would get further hit by temporary plant shutdowns and shift eliminations. The assembly plant that makes its crossover SUVs in Canada would also temporarily shut down.

Desperate customers, willing to pay whatever, are switching to ordering from Ford and waiting patiently for the order to get built, rather than picking through what’s left on the dealer’s lot. Retail orders in August quadrupled compared to a year ago, to 41,000 new orders. Nearly one-third of retail sales in August came from deliveries to customers who had ordered their vehicle in prior months.

General Motors also announced further production cuts in September, including at two assembly plants, one in Indiana, the other in Mexico, that make some of its pickup popular trucks. It’s also cutting production at six other assembly plants.

Toyota, which had at first weathered the chip shortage better and the other giants and had credited the lessons learned during the Fukushima fiasco, said in August that it would cut global production by 40% in September.

The Fukushima fiasco in 2011 had made a mess of Toyota’s supply chains. It subsequently fine-tuned its lean-inventory strategy to make it resilient to such supply shocks. Part of it was that it demanded from its suppliers that they stockpile two to six months of semiconductors of all kinds for Toyota to deal with supply shocks, which obligated chip suppliers to prioritize Toyota’s orders. But it now appears that the cushion has largely been absorbed.