They’re getting passed on and feed into the inflation scenario.

Before we get to the spiking prices and expenditures that shippers such as industrial companies or retailers now have to pay to ship their goods across the US, I want to point at the volume of shipments.

Shipment volume in June was strong but down from peak year 2018, and has been lower than the peak year 2018 every month this year, according to the Cass Freight Index, which covers all modes of transportation, but is centered on trucking, with truckload (TL) shipments representing over half of the dollar amounts, rail in second place, and less-than-truckload (LTL) shipments in third place, followed by parcel services and others. But it does not include bulk commodities.

The Cass Freight Index for shipments in June (red line) was up 4.2% from June 2019 (gray line), but was down 1.3% from June 2018 (black line). Some demand may be backing off as the impact of stimulus spending is fading, after the historic spike of retail sales earlier this year. But there are also numerous signs that the transportation industry is straining to meet demand from shippers, amid widespread complaints about longer delivery times, and about equipment and driver shortages. 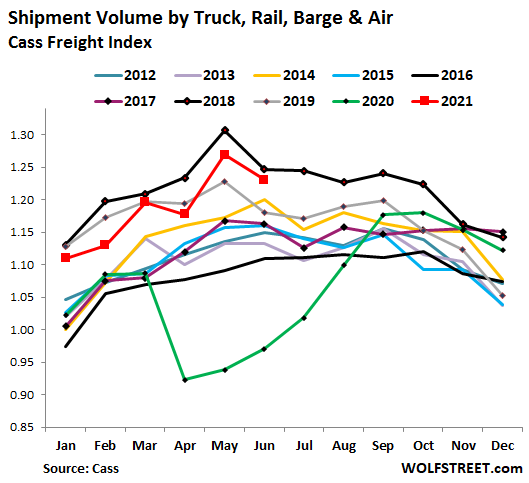 There has been enormous need for transportation, driven by the stimulus-fed spike in consumer spending on goods, and it is strained transportation capacity. And freight rates have shot higher, particularly in trucking.

According to the Cass Freight Index for Expenditures, the total amount these shippers spent in June on shipping goods to their customers in the US – despite the less than record volume – spiked by 11% from May, by 56% from June 2020, and by 28% from June 2019: 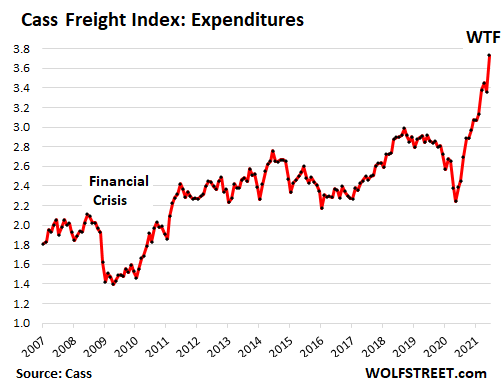 The freight rates embedded in the components of the Cass indexes jumped by 11% in June from May, and by 23% year-over-year. 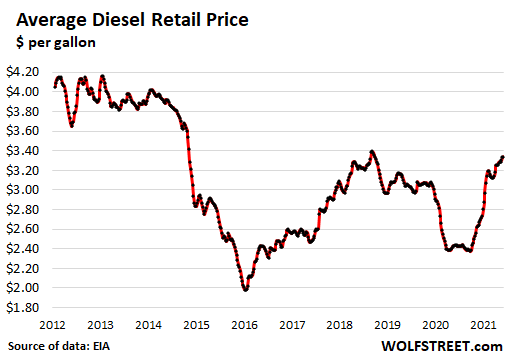 Transportation costs are getting passed on and feed into the broader inflation scenario. The scenario here is paralleled by the ocean freight industry. For example, average spot rates from Shanghai to Los Angeles have spiked from around $1,500 per 40-foot container in early 2020, to nearly $10,000 now, as Container Freight Rates Spike to New Extremes, with Worse Still Ahead

67 comments for “And Now the WTF Spike in Transportation Costs”