If these sentiments become reality over time, it’s going to be a sea change for demand and supply at these crazy prices.

So just briefly: This explains some of the dynamics we have seen in the housing market recently, with mortgage applications, sales of existing homes, and sales of new single-family houses dropping for months even as investors have piled into the market and as inventories have started to rise.

The percentage who said that it was a “bad time to buy a home” spiked over the past three months from record to record and in June hit 64%. Consumers cited home prices as the predominant reason. 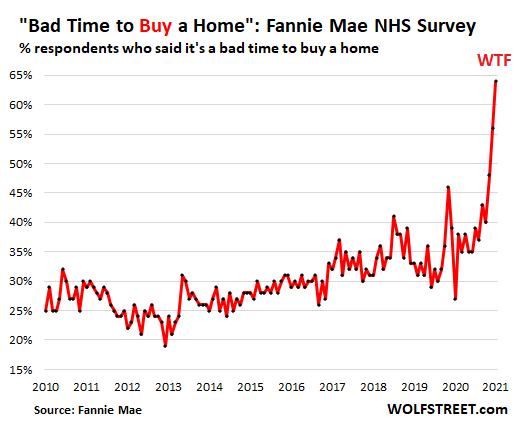 A record low 32% of the respondents said that it was still a good time to buy a home, while the percentage of fence-sitters who didn’t know dropped to 4%.

“While all surveyed segments have expressed greater negativity toward homebuying over the last few months, renters who say they are planning to buy a home in the next few years have demonstrated an even steeper decline in homebuying sentiment than homeowners,” according to Fannie Mae’s press release.

“It’s likely that affordability concerns are more greatly affecting those who aspire to be first-time homeowners than other consumer segments who have already established homeownership,” the report said.

But it’s a great time to sell a home.

The percentage of respondents who said that it was a “good time to sell a home” spiked to a record of 77%: 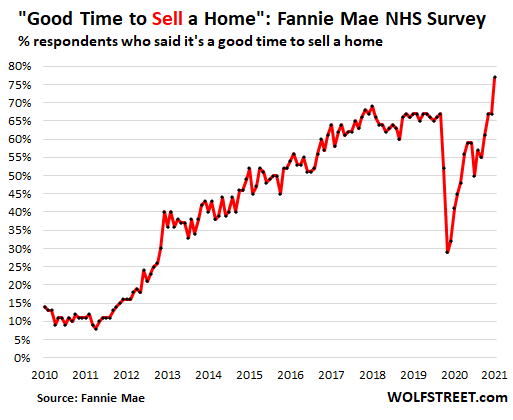 During the Housing Bust in 2010 and 2011, when prices were low, fewer than 15% of the respondents said that it was a good time to sell. Folks know when homes are priced right to buy and when pricing is ridiculously out of whack for buyers but ideal for sellers, and when it’s time to sell.

But each of these insightful and motivated sellers eager to cash out at these ridiculous prices must find a buyer of the opposite persuasion who thinks they’re getting a deal, which is what makes a market. As the market moves forward, with nearly two-thirds of the people thinking that now is a bad time to buy a home, all these sellers have some explaining to do.