Just because Amazon was able to succeed does not mean others will. But they’re getting showered with money.

Unicorn startups are on a roll. Their share prices are up at least 50% since the pandemic started, and most have doubled and some tripled. Although profitable startups such as Zoom, Roku, and Square are up the most, even startups with large losses are doing well. Share prices for Snap, Twilio, and Pinterest are up three times, Slack’s shares have doubled, and Uber and Lyft’s shares are up 50%.

VC funding is also strong. Funding hit $125 billion in the first quarter of 2021, the highest ever. And this follows a record setting year in 2020 and in the previous five years between 2015 and 2019. Optimism about the impact of startups on productivity is at an all-time high. VC fund managers such as Marc Andreesen, founder of Netscape, are predicting a productivity boom for the 2020s.

The high funding and high share prices assume that today’s Unicorn startups will grow out of their losses. After all, Amazon achieved this. As America’s most famous money-loser, it did not turn a profit until its 10th year of existence and its profits did not cover its peak cumulative losses of $3 billion until year 16. But it is now one of the most valuable companies in the world.

The below chart compares Amazon’s cumulative losses over time (bottom red line) with those of selected Unicorn startups. Cumulative losses are graphed vs. year of existence. In the case of the startups, the final year of data for each company is for the first quarter of 2021 and thus is only for one quarter as compared to an entire year for the other years. The losses are not adjusted for inflation. 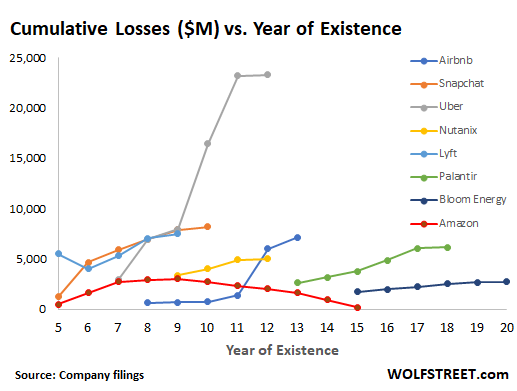 Many of these startups have huge valuations. Snap, Airbnb, and Uber are currently valued at between $90 and $100 billion while Palantir is valued at $46 billion, Lyft at $20 billion, Nutanix at $8 billion, and Bloom Energy at $4.6 billion. In comparison, Amazon didn’t pass the $20 billion mark until 2003, after it had achieved profitability.

The losses for these startups continued to grow in 2021, partly obscured by the single quarter losses of 2021 being compared to full year losses for the previous years. Other than Bloom, all these startups are on track to add at least $1 billion to their existing cumulative losses in 2021. Uber’s 2021 data point is particularly misleading because its $100 million losses include the $1.6 billion in income from the sale of its autonomous vehicle unit. Without that sale, Uber’s first quarter losses would have been $1.7 billion or $6.8 billion on an annualized basis. $30 billion in cumulative losses by the end of 2022 is entirely possible. 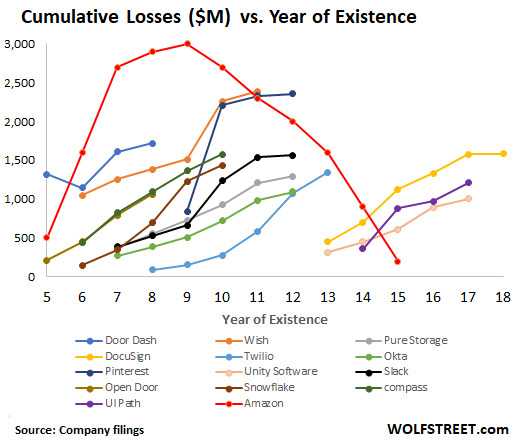 Yet the chart suggests that only one of these startups might be on its way to profitability: Pinterest, with cost rising less than the 50% increase in revenues during the pandemic. The cumulative losses for the other 11 are still growing.

The ones on the left are a bit higher, but at least they are only in their 9th to 15th year of existence. Wish has the highest cumulative losses of the batch, reaching $2.3 billion. Door Dash, Compass, Open Door, Slack, and Pure Storage have cumulative losses between one and two billion dollars.

The startups on the right side of the chart might be in a more difficult position than those on the left because they are much older than those on the left. UI Path is in its 16th year of existence, Unity and Twilio in their 18th year, and Okta in its 20th year. Yet their losses continued to grow in 2020 and 2021 and all of them have more than $1 billion in cumulative losses. Other than Pinterest, none of the startups in this chart suggest they are close to a turnaround in cumulative losses.

In summary, Amazon is not a good model for today’s money-losing Unicorns. Just because one startup was able to succeed, does not mean that others will also succeed, particularly when Amazon had achieved profitability by its tenth year of existence. Most of today’s money-losing Unicorns are far older than 10 years, some as old as 20 years. Moreover, the cumulative losses for many of these startups still continue to rise with no turnaround in sight. Amazon’s history suggests that the biggest money losing Unicorn startups may never achieve profitability on a cumulative basis, or at least it will take so long that it doesn’t matter. By Jeffrey Funk, an independent technology consultant (linkedin), for WOLF STREET