This messed-up labor market is finally producing rising wages. But companies are able to pass them on with higher prices: the beginnings of an inflation spiral.

Yet the number of job openings spiked into the stratosphere as companies complain about “labor shortages,” though there is no shortage of people who could work. 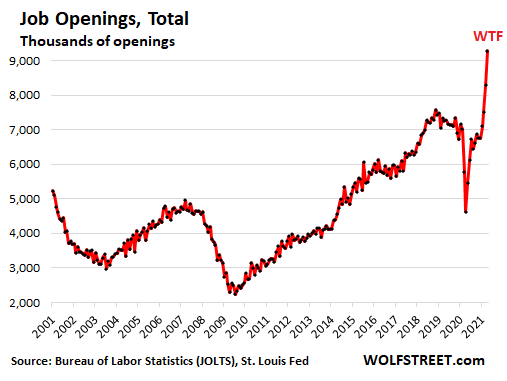 In the leisure and hospitality sector – about three-quarters of the jobs are in food services and drinking places – unfilled job openings spiked by nearly 400,000 openings, from an all-time high to a new record of 1.59 million in April (seasonally adjusted), and were up 55% from April 2019: 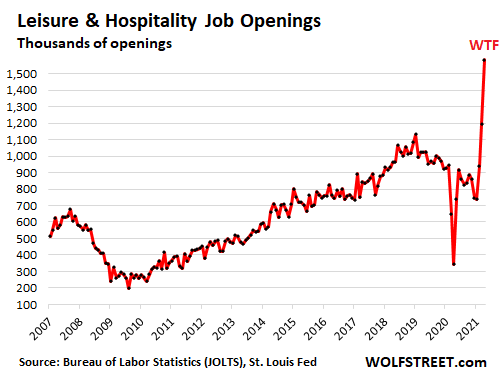 Yet, even as there were 1.59 job openings in the leisure and hospitality sector that companies are clamoring to fill, the number of people working in the sector was still down by 2.54 million compared to April 2019:

Manufacturers have been raising wages, and some have been paying signing bonuses, and they’re complaining that they’re not able to fill orders because they’re having trouble hiring enough people to ramp up production to meet the demand that was stimulated by the trillions of dollars in fiscal and monetary stimulus. 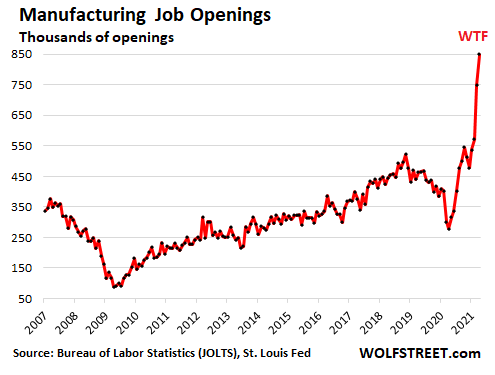 This comes after two decades of complaints that American companies have offshored manufacturing jobs to cheap countries.

The number of people currently working in manufacturing – including the new jobs that manufacturers were actually able fill – has remained roughly flat for four months, at about 12.3 million workers, according to the BLS jobs report last Friday. Compared to the last month of the Good Times, February 2020, this was down by 509,000 workers. And yet there are 851,000 unfilled jobs that manufacturers are clamoring to fill: 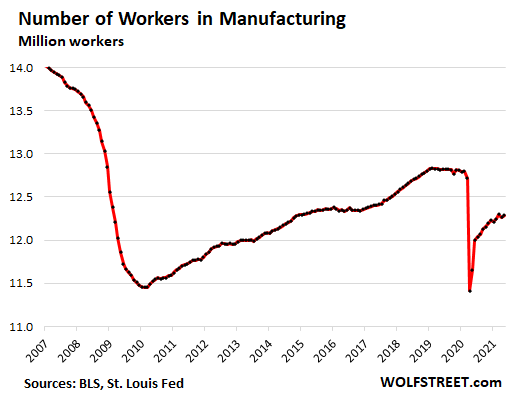 In the Arts, Entertainment, and Recreation sector, job openings spiked in a historic manner for the third month in a row, to 248,000 unfilled jobs, more than doubling since April 2019: 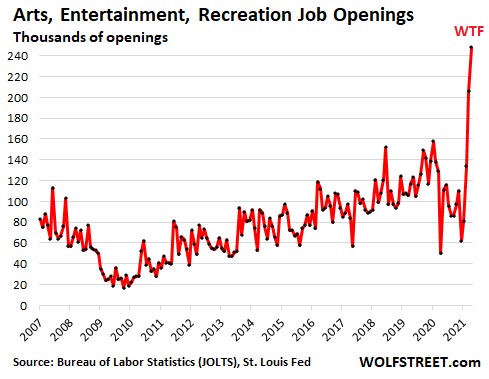 In Construction, job openings jumped by 23,000 to the second highest level ever, below only April 2019: 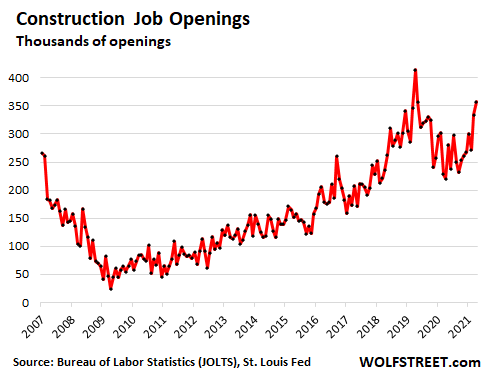 But the number of people working in construction hasn’t moved much this year through May (and in May, fell by 20,000 jobs from April), and is still 225,000 lower than in February 2020: 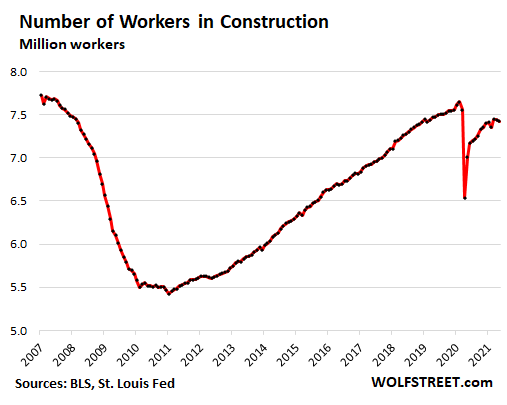 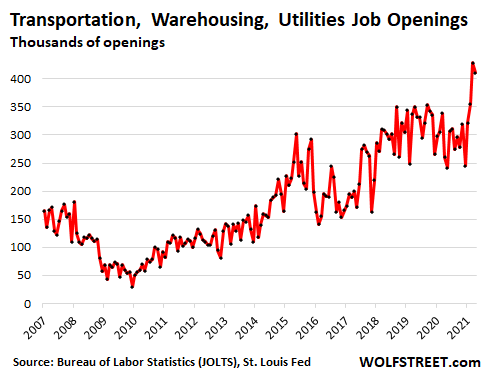 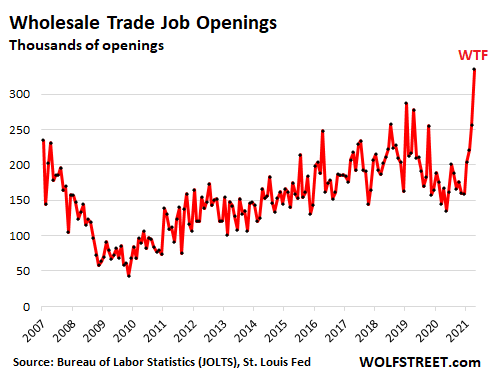 In the Retail Trade, job openings spiked by 208,000 to nearly 1 million openings, up 27% from April 2019. This sector includes the currently red-hot auto dealers, grocery stores, home improvement stores, and the like, but also the moribund mall stores: 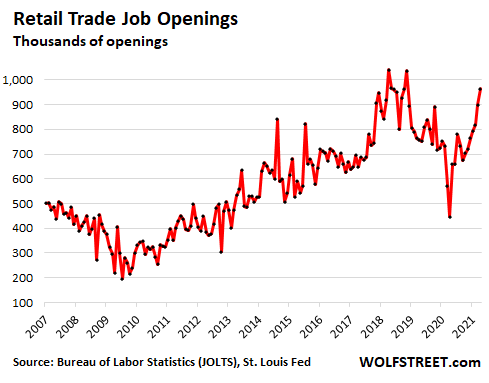 In the Professional and Business Services, job openings rose to a record 1.52 million in April, surpassing the prior record in December 2020 and were up about 25% from multi-year middle of the range.

In Education and Health Services, job openings ticked up to 1.44 million, the second highest ever, after the record in February, and were up 4.3% from April 2019.

In the Information sector, job openings rose to 116,000, in the middle of the multiyear range and down a smidgen from April 2019. The industry shed fewer jobs in 2020 as it was able to switch to working from home.

Job openings in Finance and Insurance jumped back to the upper end of the multiyear range, to 315,000 openings in April. The switch to working from home has allowed this sector to largely maintain employment, and the job openings so far have not shown unusual trends – unlike during the Financial Crisis through December 2009, when they collapsed to near nothing.

In Mining and Logging, most prominently oil-and-gas drilling, job openings fell in April to 25,000, about in the middle of the wide multiyear range.

Small businesses are having a heck of a problem filling jobs.

A record-high 48% of small-business owners reported unfilled job openings, according to the NFIB Small Business Optimism Index today. “The labor shortage is holding back growth for small businesses across the country. If small business owners could hire more workers to take care of customers, sales would be higher and getting closer to pre-COVID levels,” the NIFB said in the statement. 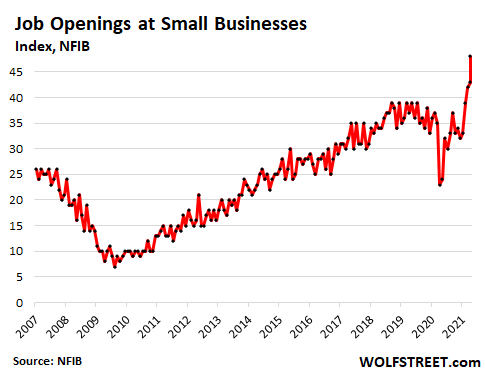 What does this mean in the larger picture?

The disconnect between the 15 million people still claiming unemployment benefits under all programs and the difficulties by businesses in getting their job openings filled is a sign of a messed-up labor market.

This is already resulting in a mix of things: Finally, higher wages, and that’s a good thing; and higher inflation, as companies are passing their higher labor costs on to the consumer, which is already happening as well, and they’re getting away with it, and that’s not such a good thing. It’s the beginning of one of the mechanisms that fire up an inflationary spiral that is not “temporary.”