China and the tax havens rule!

The debt of US nonfinancial businesses had already surged in recent years, but when the Pandemic hit, businesses went on a borrowing binge as the Fed has repressed interest rates to record lows even for the riskiest corporate borrowers.

These debts of nonfinancial businesses – including corporations and businesses that are not incorporated – jumped by 9.1% year-over-year to $17.7 trillion in Q4 2020, according to the Fed’s Financial Stability Report. This amounts to 82.4% of nominal GDP. The Fed has been ruminating in its financial stability reports about the risks posed by corporate debt.

These debts are from nonfinancial businesses and exclude banks, nonbank lenders, insurance companies, and other lenders because lenders borrow and then lend, and including their debts would lead to some double-counting.

But what is happening in the USA pales compared to what is happening in some other countries, such as the corporate tax havens and financial centers of Luxembourg, Ireland, and Hong Kong, and of course in China, according to the data released today by the Bank for International Settlements (BIS) for Q4 2020. It leaves the USA in ignominious 22nd place!

This is the incredibly spiking US nonfinancial business debt hitting an astounding 84.6% of GDP, per BIS (matches the Fed’s figures in terms of dollars and tracks closely in terms of percent-of-GDP): 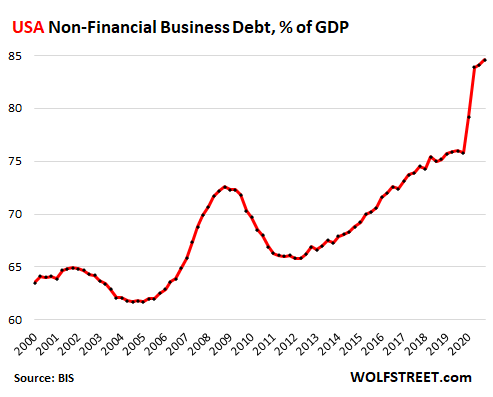 In 2016, China’s authorities started to attempt to deleverage their largest and most indebted nonfinancial companies, many of them state-owned or state-controlled. This included taking apart some overleveraged conglomerates. These efforts produced some results, but reversed during the pandemic. The US nonfinancial business debt-to-GDP ratio (red line) shows just how out of whack China’s business leverage is: 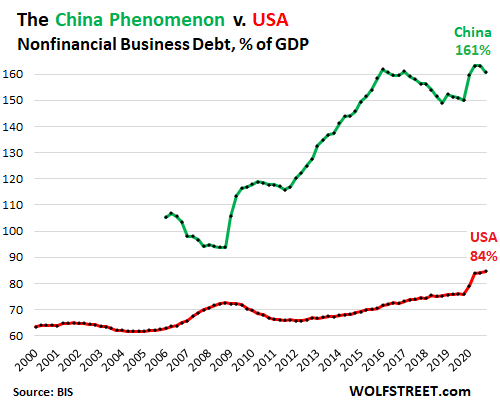 But China is only in 7th Place. Luxembourg, Hong Kong, and Ireland win.

The top three places in terms of the business-debt-to-GDP ratio are the corporate tax havens and financial centers Luxembourg (with business debt at an astounding 342% of GDP), which amounts to over four times the ratio of the USA (84%); Hong Kong (247%); and the favorite for US corporations, Ireland (190%). Many global companies are headquartered, sometimes on a mailbox basis, in these places, and some of their debts are registered there, though they were marketed to investors in other countries. Note the puniness of the US ratio (red line at the bottom): 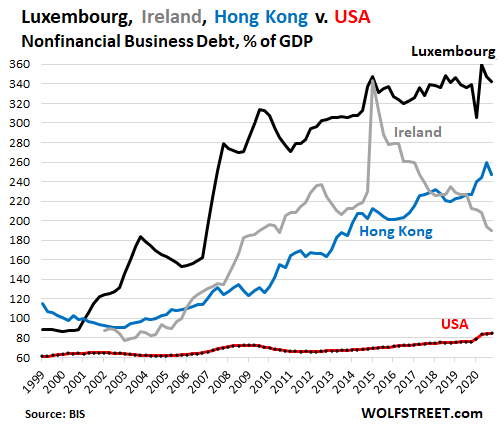 Sweden and France have immensely indebted companies. The Bank of France has long lamented the risks associated with the indebtedness of the French giants, many of them partially state-owned. In Sweden, the business-debt-to-GDP ratio rose to 175.3%, in France to 171.1%, and in Belgium to 166%, still beating China. 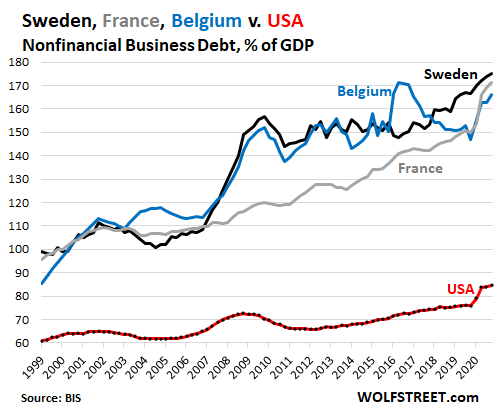 They’re behind China (7th place) in terms of business debt to GDP. All charts below are on the same scale as the chart above for Sweden, France, and Belgium, ranging from 60% to 180%. Singapore is a major financial center: 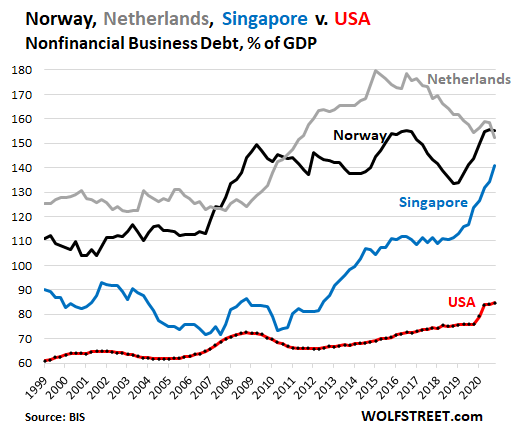 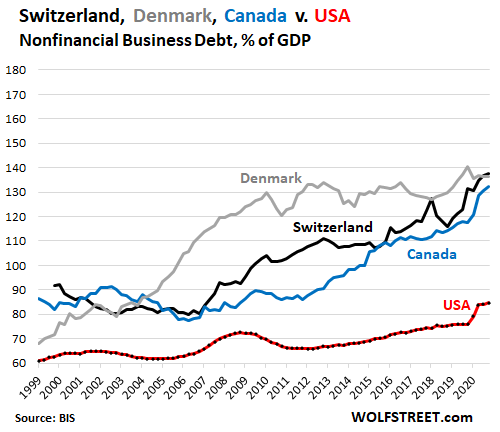 Japan’s businesses were deleveraging for about 25 years, following the blowup of the bubble in 1989. Their business debt to GDP bottomed out in 2016. But all along, they’ve outdistanced the US debt-to-GDP ratio: 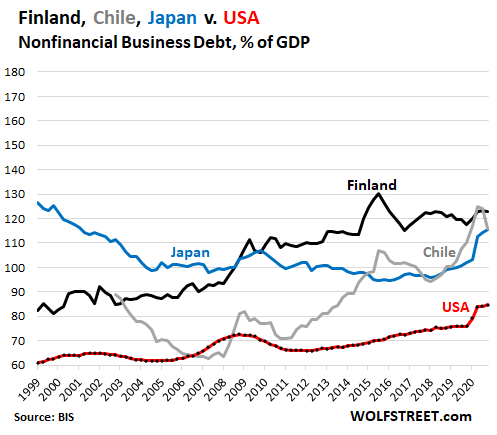 Korean companies deleveraged for years coming out of the 1997 Asian Financial Crisis. Spain and Portugal deleveraged after the implosion of their enormous housing bubbles led to their own financial crises mixed in with the euro debt crisis. And the deleveraging hasn’t stopped yet. What happened in 2020 that caused their percentages to tick up was that GDP collapsed: 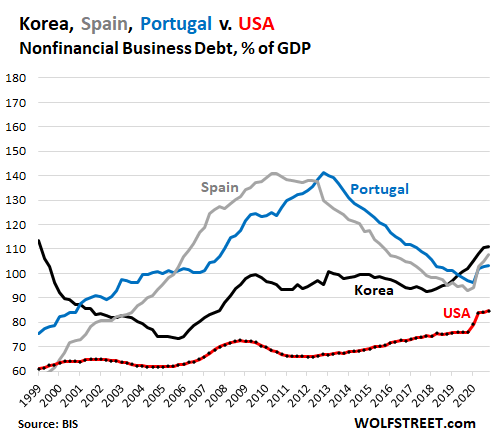 In recent years, Russia’s corporate giants, many of them state controlled and big exporters of crude oil, gas, minerals, other raw materials, military equipment, and some other products have borrowed heavily in foreign currency and have moved Russia into 21st place, just ahead of the US: 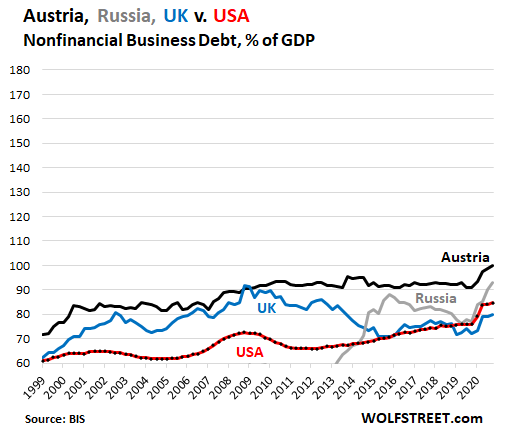 106 comments for “The Countries with the Most Monstrous Business Debts: US in 22nd Place Despite Massive Spike During the Pandemic”