Mexico and Brazil, having seen the economic destruction that high inflation can wreak, don’t want to see it again.

Latin America will soon be hit by a wave of business bankruptcies and defaults, according to Jesús Urdangaray López, the CEO of CESCE, Spain’s biggest provider of export finance and insurance. CESCE insures companies, mainly from Spain, against the risk of their customers not paying due to bankruptcy or insolvency. It also manages export credit insurance on behalf of the Spanish State.

BBVA, which is heavily invested in Argentina, warned about the worsening situation in the country. If Argentina’s economy continues its inflationary spiral, it could end up affecting BBVA’s overall performance and financial health, the Spanish bank said.

Argentina’s government is once again trying to restructure its foreign-currency debt with the IMF, having already defaulted on the debt once since the virus crisis began.

Ecuador was first to default on its foreign currency debt, followed by Argentina, then Surinam, Belize, and Surinam twice more — six sovereign defaults so far in 13 months.

Latin America has been hard hit by the virus crisis. But the region’s cash-strapped governments with weak currencies and surging inflation cannot afford to provide the sort of financial support programs being rolled out in more advanced economies. The fiscal response has added just 28 cents of extra deficit spending for every dollar of lost output. By contrast, governments of more advanced economies have boosted their spending by a dollar for every dollar of lost output. A few, such as those of the United States and Australia, have been significantly higher.

Such fiscal largess was never an option In Latin America. The result has been a massive slump in economic output. The region’s GDP shrank by 7% last year — the worst contraction of any region tracked by the IMF. In some countries, particularly those that are heavily dependent on tourism, it was far worse than that. Peru’s GDP, for instance, contracted by 11% while that of Mexico, the region’s second largest economy, tumbled by 8.5%.

Brazil shrank by just 4.1% last year, as public spending soared. But its debt ballooned. By the end of the year, government debt had reached 89% of GDP, over 30 percentage points higher than the regional average (55%). The Central Bank of Brazil’s decision at the start of the crisis to slash interest rates to 2%, their lowest level on record, helped support the economy.

But it also stoked inflation. In April, consumer prices rose at an annual rate of 6.8%, the highest since 2016 and well beyond the central bank’s upper limit of 5.25%. 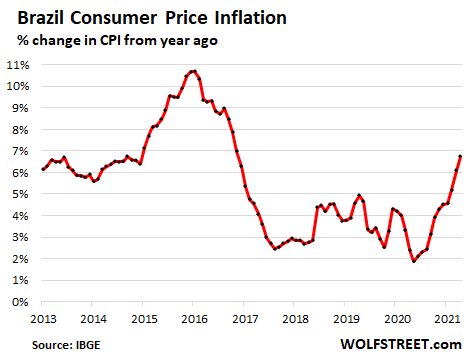 The central bank, in trying to tamp down on inflation, implemented a surprise shock-and-awe rate hike of 0.75 percentage points in March, and in May hiked its policy rate again by 0.75 percentage points to 3.5%, and at the time indicated that a similar rate hike would come in June. Rising rates are going to make it harder for businesses, consumers, and the government to service their debt obligations.

Inflation is rising more slowly in some Latin American countries (e.g. Peru, Chile, Bolivia) and more quickly in others, particularly in Argentina and Venezuela.

Mexico is also seeing a surge in consumer prices though the government adopted a more restrained fiscal response to the virus crisis. The Bank of Mexico cut its policy interest rate to 4% earlier this year, but that remains relatively high. Inflation spiked to 6.1% in April, double the central bank’s target rate. 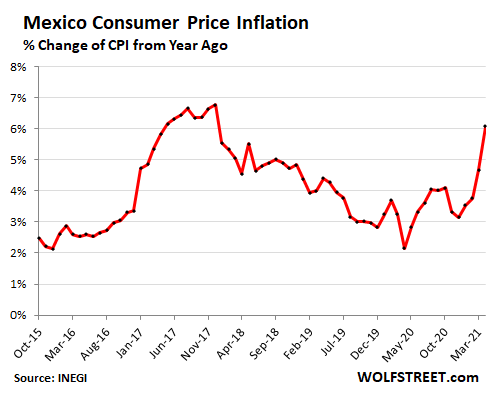 The price of food is rising sharply. Corn prices have more than doubled since August last year. This has fueled higher prices for corn tortillas — the quintessential staple in Mexican diet and cuisine — which have reached their highest average level since 2017. One of the last times prices rose this fast, in 2006, it led to food riots.

Mexico, like Brazil, has seen the economic destruction that high inflation can wreak and it doesn’t want to see it again. If consumer prices continue to rise, the Bank of Mexico may have to begin hiking rates, which will make it even harder for the economy to emerge from its deepest recession since 1932.

It will take time for the initial round of rate hikes to have an appreciable effect in slowing consumer price inflation. And they may not even be enough to tame inflation, given that most of the pressures stoking consumer price rises are largely global in scope. They include low inventories, supply chain shocks, rising shipping costs, surging demand for certain commodities and consumer goods in developed countries, particularly the US, and facing these supply constraints is massive fiscal and monetary stimulus in advanced economies.

Even as that stimulus threatens to fuel breakaway inflation in the world’s poorer economies, central banks in the northern hemisphere have shown little interest in taking the foot off the gas. These price increases are transitory, they say, having adopted a wait-and-see strategy. And that means prices are likely to continue to rise in Latin America even as the region’s economies remain mired in deep crisis. By Nick Corbishley, for WOLF STREET.