Imports of consumer goods spiked by 38%. Imports are not a sign of economic strength, but are a drag on GDP. 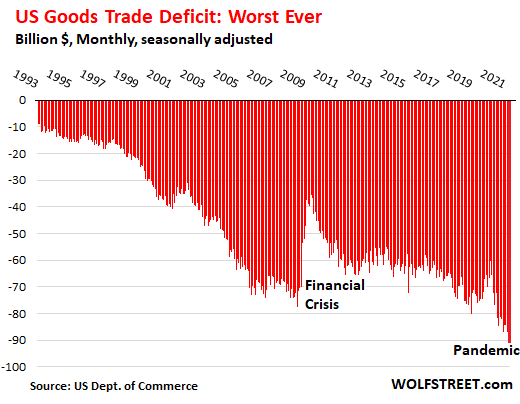 Imports from the rest of the world jumped by 8.9% from March 2019 and by 20.6% from March 2020 to another huge worst ever level of $233 billion. Imports are a negative in the GDP calculation and are drag on GDP. But they do stimulate the economies of other countries.

Imports by major category in billion dollars and in percent change from March 2020. Note the 38% year-over-year explosion of consumer goods imports. That’s in part where the stimmies went: 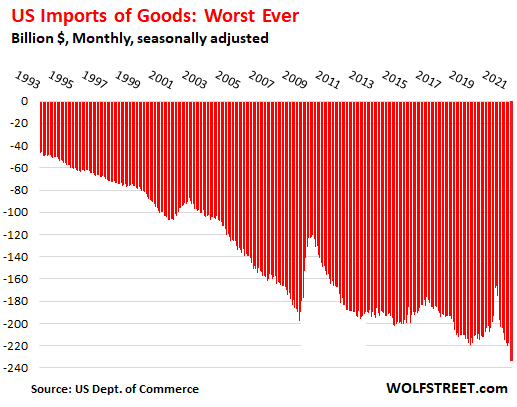 So the stimmies were put to good use stimulating the manufacturers in other countries and the offshore entities of Corporate America, after two decades or rampant offshoring by Corporate America, including by such stalwarts as the US automakers which import components and entire vehicles, or consumer electronics makers, such as Apple, or retailers such as Walmart which imports nearly everything except food, and of course Amazon’s platform where foreign manufacturers can sell directly to US consumers.

Exports from the US to rest of the world, at $142 billion, were flat with March 2019, and up 11.5% from the beaten down levels of March 2020. Exports are a positive in the GDP calculation and add oomph to GDP, and so there isn’t much to add from exports: 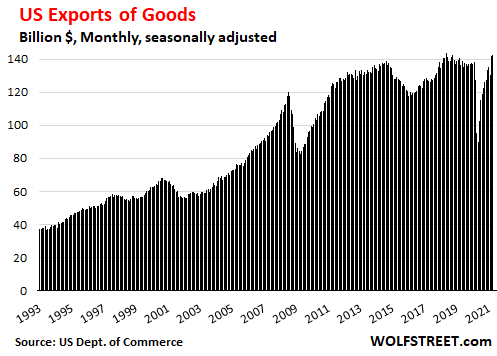 Exports by major category in billion dollars and in percent change from March 2020. The largest category, Industrial Supplies, includes the exports from the US fracking industry: petroleum and petroleum products. The ballyhooed exports of foods, fees, and beverages, at $13 billion, accounted for only 9% of total US exports ($142 billion):

These are the results of globalization by Corporate America, which has been incentivized for decades to do so. It was touted as a good thing across the board for way too long, as booming US services were supposed to overcome the trade deficit in goods. But that turned out to have been a joke.

Recently, even Fed Chair Jerome Powell blamed globalization for some of the distortions in the US, including in the labor market and the horrendous wealth disparity, instead of acknowledging the Fed’s role in those distortions.

And on top of these structural conditions that have created the long trend of surging trade deficits, there came the tsunami of government stimulus payments, from the infamous stimmies to innumerable other programs, and the shifts in spending from domestic and even local services, such as bars, ballgames, concerts, conferences, cruises, hotel stays, and flights to durable goods and not so durable goods, a large portion of which is imported.

140 comments for “Imports, Trade Deficit in Goods Explode to Worst Ever, Powered by Stimmies and Decades of Rampant Offshoring”