No housing market can produce enough homes when homes are massively used as vacant investment speculations. This creates an artificial shortage.

That the housing market has gone nuts is now in the news on a daily basis with click-bait reports of silly bidding wars with ludicrous amounts paid over already high asking prices, powered by the new pandemic of FOMO – the fear of missing out. Bad deals are made in good times, as bankers say, and these are the best of times, powered by the Fed’s policies of moving heaven and earth to inflate every conceivable asset bubble.

One side effect of the combo of these surging home prices, still low mortgage rates, and FOMO is that people have bought new homes without putting their old and now vacant home on the market and with no intention of putting it on the market for now – and thereby they have bought a “second home” – which squeezes supply and heats up the frenzy further. 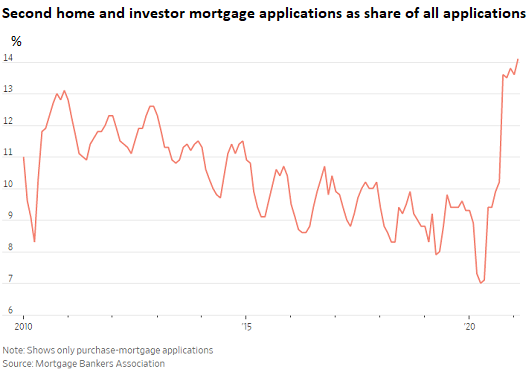 I have seen that people, eager to leave a big city, bought a home in a place where they always wanted to live, in the distant suburbs, or in vacation hotspots in the mountains or in coastal enclaves they’d fallen in love with, or wherever, and that, because home prices are surging and money is cheap, they’re not selling their old home. And so now, they own second homes.

And while they’re at it, they expect the price of their new home to surge, and they’re making tons of money just skiing or lollygagging by the beach and skipping Zoom meetings. That’s housing bubble math.

The number of buyers who locked in mortgage rates for second homes in February soared by 93% from February last year – but that’s a step down from the frenzy in the second half last year, when these rate locks had surged by as much as 118% year-over-year in September, according to Redfin’s analysis of data by real estate analytics firm Optimal Blue, cited by the WSJ. This surge far outpaces the increases of rate locks for primary residences (chart by the WSJ): 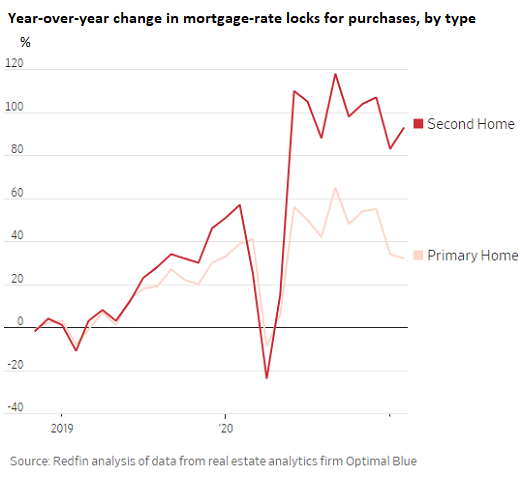 No housing market can produce enough homes when homes are used massively as vacant investment speculations. This creates an artificial shortage.

But there’s another side, which has played out during the Housing Bust: Vacant homes as investment speculations are subject to profit taking, when the owner wants to lock in profits by selling them. And this could happen suddenly, for instance when the housing market turns and those highly leveraged high-profit investments turn into high-expense money-losing albatrosses. And before the gains evaporate, owners put the homes on the market, whereby this shadow inventory suddenly becomes inventory for sale, without the owner having to buy another home.

The government has, of course, been subsidizing these mortgages for second homes and investment properties. But Fannie and Freddie are now beginning to impose restrictions in terms of how many of these mortgages they buy from lenders. Going forward, they will limit these types of mortgages to 7% of the dollar amount of their overall purchases. Freddie has already imposed the 7% limit; and Fannie has given lenders until June 1 to comply, according to FHA officials, cited by the WSJ.

Remember the first chart above? The share of these mortgages in the overall mortgage pool has soared to 14%.

These restrictions were requested by the Treasury Department toward the end of the Trump administration as part of the negotiations with the FHFA, which overseas Fannie and Freddie, to trim the roles of the two mortgage giants. The idea is that second homes and investment properties are not the core mission of Fannie and Freddie to begin with.

The effect of the new restrictions is that mortgages for second homes and investment properties outside the cutoff will come with higher interest rates – which would play out particularly in housing markets where second homes are a big factor, which are also some of the markets that have the steepest price surges.

257 comments for “The Explosive Surge of Mortgages for “Second Homes”: Housing Bubble Math”