Bringing back permanent job losers took years the last two times, and it hasn’t even started yet.

Employers reported that they have added 916,000 workers to their payrolls in March, and 1.62 million over the past three months (green line in the chart). This brought the total number of jobs at “establishments” – companies, governments, and nonprofits – to 144.1 million, still down 8.4 million jobs from February 2020, according to the Bureau of Labor Statistics this morning. 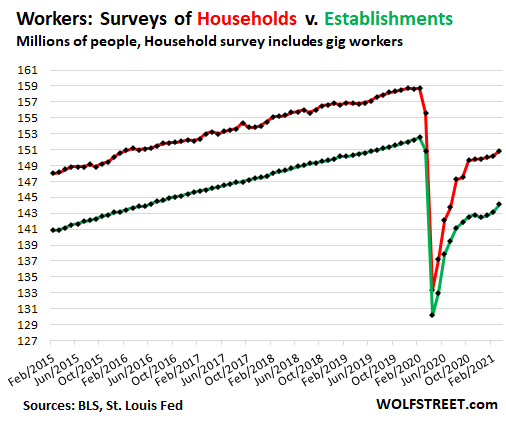 Of the still unemployed workers, 2.03 million reported being on temporary layoff or furlough in March, the lowest since February 2020, down by 1.01 million over the past three months, and down by 16 million from the peak in April (green columns in the chart below). This includes workers in the discretionary services sector that was hit hardest by the Pandemic, such as gyms, hair salons, bars, restaurants, sports and entertainment venues, airlines, hotels, etc.

But the number of “permanent job losers” declined by only 65,000 in March, and at 3.4 million was higher than it had been in December and in August. In other words, these permanent job losers haven’t made any significant headway in getting back to work (red line): 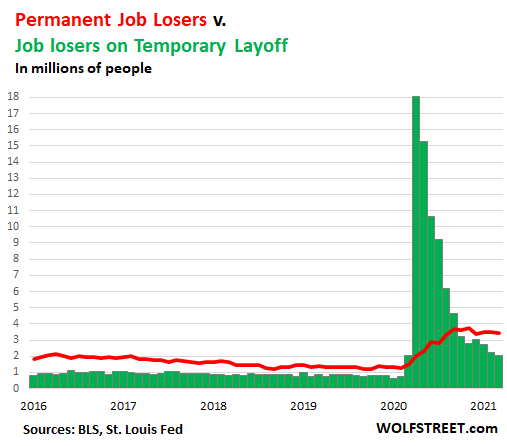 This employment crisis was very different.

In the prior two employment crises, permanent job losers dominated the scene from day one (red line), and those considered temporary job losers (green columns) weren’t much of a factor. At the time, most of the layoffs were considered permanent.

But at the beginning of the Pandemic, when layoffs exploded from one day to the next, most of those laid off were told to be, and were considered to be, on temporary layoff.

Bringing back these permanent job losers took many years the last two times, and it hasn’t even started this time around: 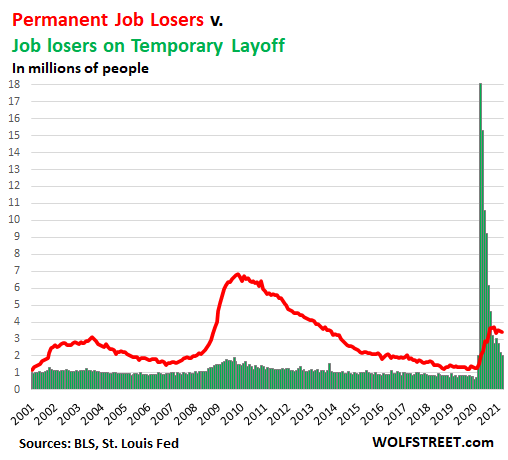 The labor force – people either working or deemed to be looking for a job – in March, at 160.6 million, was still down 3.9 million from February 2020, stuck in the middle of the range that has persisted since July 2020. Still waiting for the breakout: 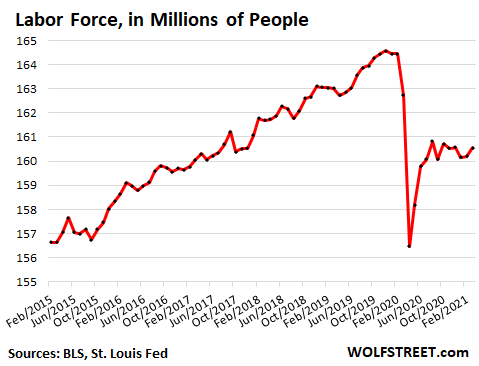 The employment-population ratio rose to 57.8%. It compares the number of working people to the working-age population (16 years or older) and is the broadest measure of employment.

Over the past two decades, it has been on a dismal trend. As always, it dropped during each recession. But since 2000, the ratio never fully recovered before the next employment crisis hit.

Ascribe this phenomenon to rampant offshoring of work that takes on a high priority in recessions as companies are cutting costs and are using the cover of the recession to farm work out to cheap countries – not just manufacturing but increasingly services, such as tech work, healthcare, legal work, research, design centers, etc.: 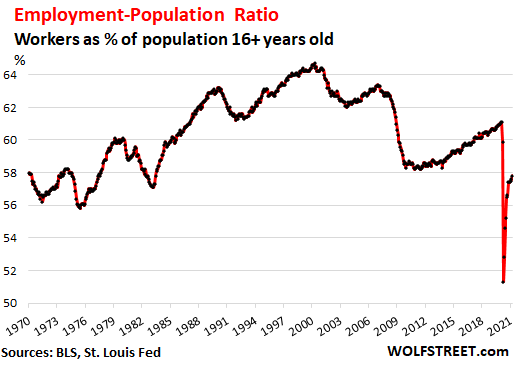 106 comments for ““Permanent Job Losers” No Better Off Than Last Summer. But Most of the 18 Million Job Losers on Temporary Layoffs Are Working Again”