General Motors reported its results today, the last of the three US automakers to do so. Those three are GM, Ford, and Tesla. And we can compare their global revenues, global deliveries, and stock market capitalization. Chrysler no longer counts as US automaker, though it still has some plants in the US. Purchased out of bankruptcy by Fiat years ago to become Fiat Chrysler, it has now merged with Groupe PSA, which owns Peugeot, Citroën, Opel, and DS. The whole schmeer is headquartered in Amsterdam and was renamed Stellantis. So this is a foreign automaker. 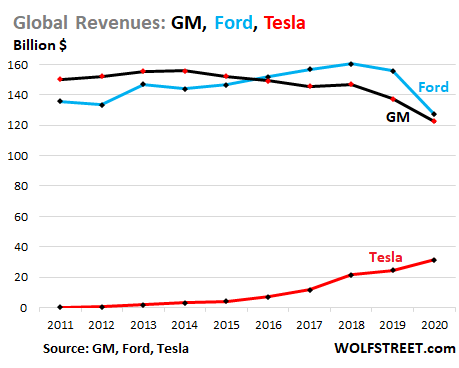 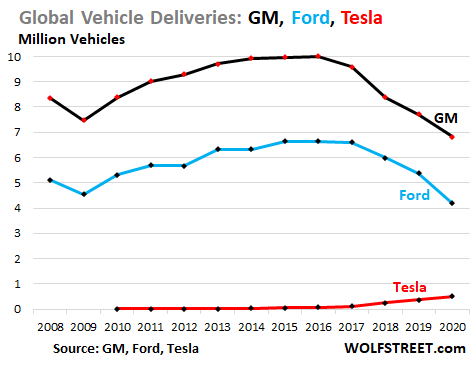 And for your amusement in these crazy times.

Here’s how the ludicrous stock market, so to speak, reacted to this situation: GM’s market cap (shares outstanding times share price) – despite six years of declining revenues and four years of declining deliveries – jumped inexplicably by 58% from a year ago to $77.6 billion.

Ford’s market cap, despite two years of revenue declines and three years of declining deliveries, and a $1.3 billion loss, jumped by 46% year-over-year to $46.7 billion. 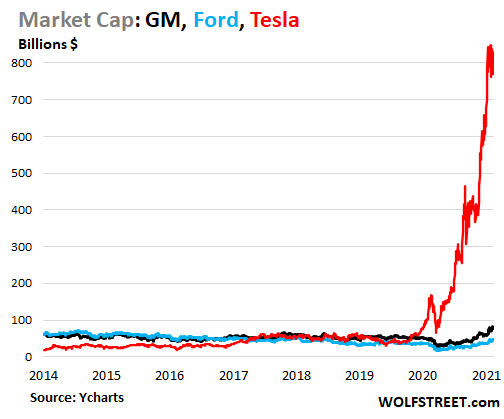 And here is another irony for your amusement: Tesla’s shares have quietly given up $78 billion in market cap in the 11 trading days since January 26, which is more than the entire and already ludicrous market cap of GM.

218 comments for “Tesla, GM, Ford Together in Ludicrous-Mode WTF Charts”