Against expectations, the feared plunge in remittances, as during the US Housing Bust, did not occur. For interesting reasons. Weirdest Economy Ever.

The total amount Mexico received in “remittances” — transfers of money by workers of Mexican descent mostly in the US but also other countries to individuals in Mexico — surged by 11.4% in 2020 to $40.6 billion, the highest ever, and the eighth year in a row of increases, according to data released by the Bank of Mexico.

This occurred in the midst of a terrible economy in the US, as GDP fell by 3.5% in 2020, the worst annual decline since 1946, triggering a wave of business closures and tens of millions of job losses in the U.S., where 98% of the remittances to Mexico originate. In the wake of the Global Financial Crisis, which was sparked by the US mortgage crisis and housing bust and resulted in a protracted downturn in US housing construction, there was a six-year downtrend in remittances to Mexico, totaling 21%. The opposite has happened during this downturn: 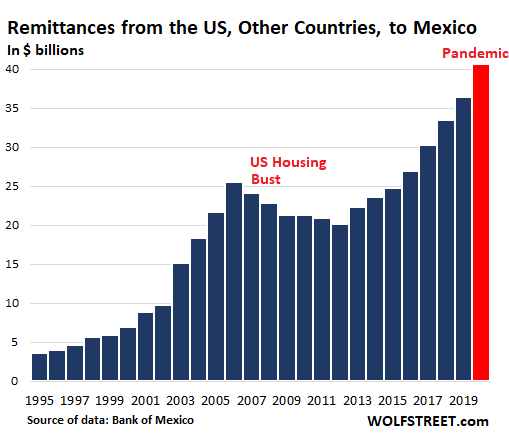 Mexico is the third largest recipient of remittances worldwide, behind India ($83 billion of inflows in 2019) and China ($70 billion), both with populations more than ten times larger than Mexico’s.

Now more than ever, the remittances are a lifeline for the country’s economy, which shrank by 8.5% last year. As GDP has shrunk, the public debt-to-GDP ratio has surged from 45% to 52%, its highest level on record. Much of this debt is in foreign currency that Mexico cannot inflate away. With the economy in its deepest recession since 1932, many people are now even more dependent on the funds sent by relatives working in the U.S. or other overseas countries. In some Mexican states, those funds represent as much as 10% of total revenues.

In 2020, remittances accounted for 3.8% of Mexico’s GDP, up from 2.9% in 2009. That is the equivalent of almost three times the amount of funds that state-owned oil company, Pemex, obtained from its exports of crude oil and other hydrocarbon products in 2020 ($14.8 billion, down 34% on 2019) and almost twice as much as the foreign direct investment that flowed into Mexico (approx $23 billion).

The last year saw a surge in both the number of transactions made as well as the average amount sent in each transaction, according to the Bank of Mexico. Here are some standouts for 2020:

Why Are Remittances Still Rising?

With the global economy in the grip of its deepest recession since the 1940s, the theory early on was that remittances would decline significantly in 2020. On April 22, the World Bank forecast that they would fall by around 20%:

“The projected fall, which would be the sharpest decline in recent history, is largely due to a fall in the wages and employment of migrant workers, who tend to be more vulnerable to loss of employment and wages during an economic crisis in a host country.”

But the opposite has happened in Mexico. And it’s not the only place. In Guatemala total remittances rose by 8% in 2020, to reach a record high of $11.5 billion. El Salvador saw a 4.8% increase.

A similar trend has been observed in other Latin American and Caribbean economies that depend heavily on cash remittances, as well as in countries further afield such as Pakistan and Bangladesh. In many of these countries, the flow of remittances initially slowed in the first month or two of the crisis (between March and May) before picking up again shortly thereafter.

One reason for this is that US workers with roots in Mexico and other countries began receiving government support, such as unemployment benefits and stimulus money, which enabled them to continue sending money back to their families.

Another is that workers in the U.S. and elsewhere who weren’t overly affected by the crisis — such as staff at hospitals treating Covid patients or construction workers — decided to send more money to their families to help them weather the storm. This could also have spurred a rise in total remittance payments.

And there’s another possible reason: The money sent back has taken formal channels, as travel restrictions have made it harder for people to take their money back to their families in the form of cash, thus diverting remittances from informal channels that are hard to track to formal channel that show up in the official data, according to a report by the World Bank. That could mean that last year’s surge in the flow of remittances to Mexico and other parts of Latin America may not be quite as impressive as the figures suggest. Be that as it may, the situation for the recipient countries is still a lot better than many had feared. By Nick Corbishley, for WOLF STREET.

The enduring trend to working from home, an exodus of companies, and several unique factors tore into one of the most expensive commercial real estate markets in the world. Read… Biggest Office Glut since 2005 Hits Hong Kong Office Market amid Worst Recession on Record

91 comments for “Despite Terrible US Economy in 2020, Workers of Mexican Descent Sent Most Dollars Ever Back to Mexico”