$157 Billion in Debt. A reckoning of sorts. “Asset impairments and abandonments,” AT&T calls it.

After a horrendously expensive acquisition spree of legacy companies that included DirecTV and Time Warner – with the purpose to disrupt, one would suppose, but disrupt what exactly? – AT&T today disclosed that it wrote off $16.4 billion in assets in Q4, for a total $18.9 billion write-off in the year 2020. The billions are going over the cliff so fast these days it’s hard to even see them.

AT&T called this write-off a “non-cash” expense – to insinuate that it doesn’t matter, and Wall Street analysts go along with this view because they’re hyping AT&T’s stock and they don’t want write-offs to matter. And true, today’s act of writing off those assets was an accounting entry that didn’t today involve cash, but acknowledged a reality that did involve cash at the time – lots of cash.

Back when those assets were purchased, lots of cash was involved, including the company’s own form of cash, namely its shares.

AT&T had acquired DirecTV for $67 billion, including the assumption of DirecTV’s debt, in 2014. The deal closed in 2015. It paid shareholders of DirecTV a total of $48.5 billion, or $95 a share, in a mix of cash and AT&T shares. The cash was borrowed, therefore saddling AT&T with more debt; and the AT&T shares were freshly issued, thereby diluting existing shareholders.

Then in 2018, AT&T acquired Time Warner for $108.7 billion. These and other deals saddled AT&T with a gigantic mountain of debt, $157 billion. S&P rates AT&T’s debt “BBB,” which is two notches above junk (my cheat sheet for corporate credit rating scales).

In today’s earnings release, AT&T reported that quarterly revenue in its legacy-video units, which includes DirecTV, fell and that it lost 617,000 subscribers in premium TV; and it reported that revenues in its WarnerMedia units also fell.

But revenues in AT&T’s wireless phone division rose, driven by a 28% surge in equipment sales. Americans went on a record-breaking binge in durable goods purchases, and AT&T got its share.

It remains unclear why exactly AT&T had bought DirecTV in the first place – outside of CEO megalomania, a drive for endless corporate concentration of power, and seemingly endless availability of cheaply borrowed money. And it remains even more unclear why it paid $67 billion for it, a legacy company in the pay-TV sector, in the era of rampant cord-cutting as people were switching to newer technologies and services, such as Netflix and other streaming services.

These acquisitions also ballooned AT&T’s biggest asset category, “goodwill.” Goodwill includes the amounts that the company estimated it had overpaid for acquisitions. It’s an expense that has been parked temporarily as an asset on the balance sheet, where it is patiently waiting to become an actual expense. And some of this goodwill became an actual expense today.

There are still $135 billion in goodwill and $15 billion in “other intangible assets” sitting on AT&T’s balance sheet, and so there are plenty more opportunities for AT&T to write off more of the money it blew on its acquisitions.

The other thing that’s left behind on the balance sheet is the debt, and it cannot just be written off, it needs to be serviced or paid off, and it’s a majestic pile.

AT&T’s debt peaked at $176 billion in 2018. Since then, AT&T has been trying to whittle down that pile of debt, including by selling some assets, to avoid getting downgraded to “junk.” It’s trying to sell a portion or all of DirecTV, and the prices bandied about would entail a big loss. The write-off today was foreplay.

But the acquisition binge since 2014, starting with DirecTV, more than doubled AT&T’s debt from an already substantial $80 billion to a blistering $176 billion by 2018. This was cash that the company borrowed and then blew on acquisitions. Now it’s writing portions of these acquisitions off as “non-cash” charges – non-cash only today because the actual cash was incinerated years ago, and the debt is left behind: 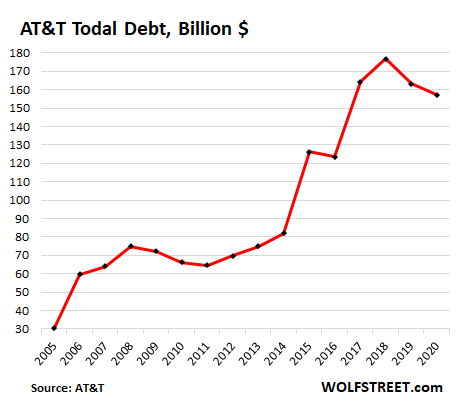