Canada’s real estate markets are booming, but lenders are preparing for mortgage losses. Bank of Canada (BoC) data shows the allowance for credit losses due to mortgages reached a record high in Q3 2020. The record was reached with the biggest surge in the annual rate of growth since the Great Recession.

Today’s data point is the allowance for credit losses, specifically for mortgages. You might have already guessed what this is – the amount banks set aside in the event of non-payment. When lenders expect a loan has become unrecoverable, they have to add more money to this pile. We’re going to be looking at the aggregate amount across all lenders.

The amount set aside for losses has climbed to a new record high, and is growing unusually fast. Allowances reached $3.9 billion in Q3 2020, up 22.01% from the previous quarter. This represents an increase of 54.11% when compared to the same quarter last year. It’s not just a record high for dollars, but also the highest rate of growth in over a decade. 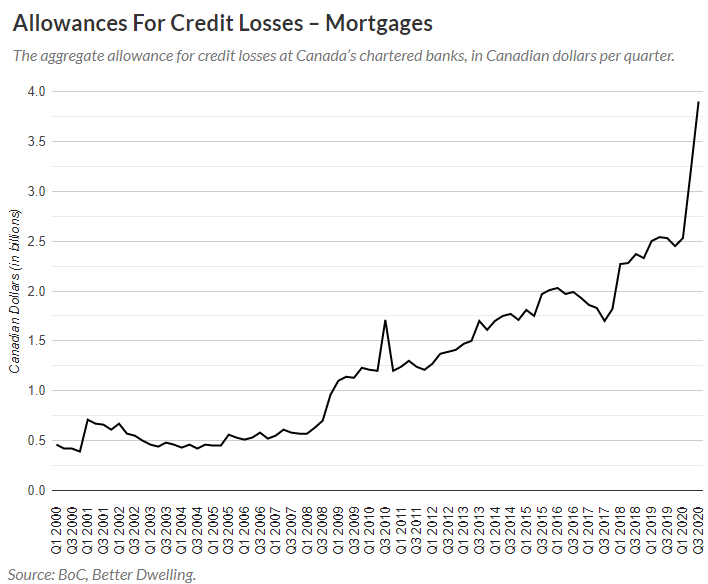 Mortgage loss allowances at Canadian lenders grew at the fastest pace since the Great Recession. There’s been consistent growth since 2018, but the annual rate of growth has been tapering. That is, until the most recently reported quarters. Both Q2 and Q3 in 2020, showed a very large surge in growth. It was Q3’s annual growth that was the largest print since 2009 though. 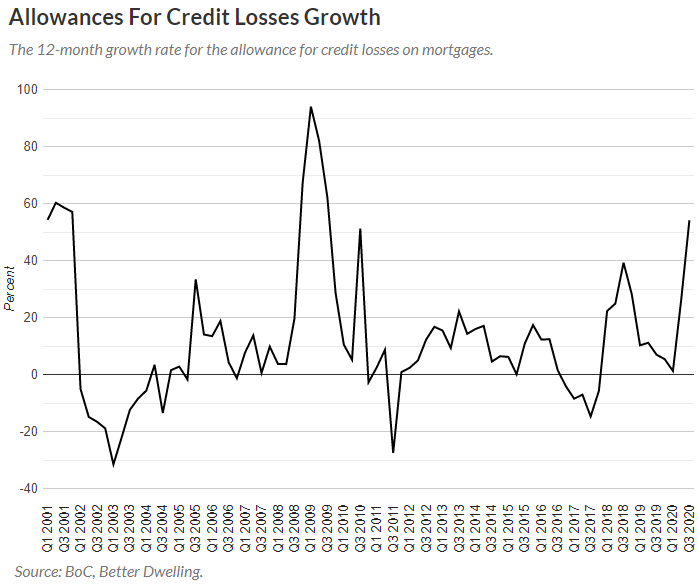 Canadian mortgage lenders are preparing for record mortgage losses, but this is unusual. Large growth in this area historically occurs around market slow downs. Naturally, it’s odd to see it occur while almost every market reports record home sales. Seeing lenders prepare for a default event is great for lenders, who won’t be caught off guard. However, it’s generally bad for the borrowers that are showing signs of stress, instead of selling into a low inventory market. By Daniel Wong, Better Dwelling.

The US dollar lost purchasing power with regards to houses at the fastest rate in six years. Read… The Most Splendid Housing Bubbles in America: December Update on House Price Inflation Gone Wild