But don’t fear for airline shareholders & creditors; they get to benefit from another $15 billion via “Taxpayer Capitalism.”

The days around the Christmas holidays have always been huge for leisure travel. Last year was huge too. But this year, with all the discouragements about traveling, the exhortations to stay at home, and with lots of people refusing to set foot inside an airport?

TSA checkpoint screenings of passengers that entered the secured areas at US airports during the Christmas travel period from Friday, December 18, through Sunday, December 28, ranged from 616,000 on Christmas Day to 1.28 million yesterday, the largest day since the collapse of airline traffic in March. But that biggest day yesterday was still down by 50% from Sunday after Christmas last year (2.58 million). 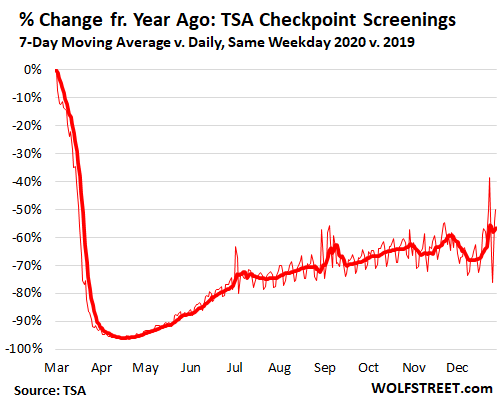 The Pandemic has given rise to numerous high-frequency data sets, including daily data sets that are reported the next day. They give an immediate picture of the that segment of the economy, but they’re somewhat raw.

One of them is the TSA’s data set on checkpoint screenings, released every morning for screenings the prior day. It compares these daily number of air passengers to the same weekday in the same week last year. This metric gets caught up in calendar shifts; for example, Christmas Day, which fell on Friday this year, is being compared to Friday, December 27, last year. The seven-day moving average irons out most of those calendar shifts.

In mid-December, TSA checkpoint screenings of passengers had dropped sharply as they normally do after the Thanksgiving travel burst, but they did so even more sharply than last year, and were between -67% and -72% compared to 2019, with the seven-day moving average at around -68% for nine days in a row. But then the ramp-up of the Christmas leisure travel burst began.

The chart below shows the number of TSA checkpoint screenings in 2020 (red) and 2019 (green) for each day and the seven-day moving average (bold): 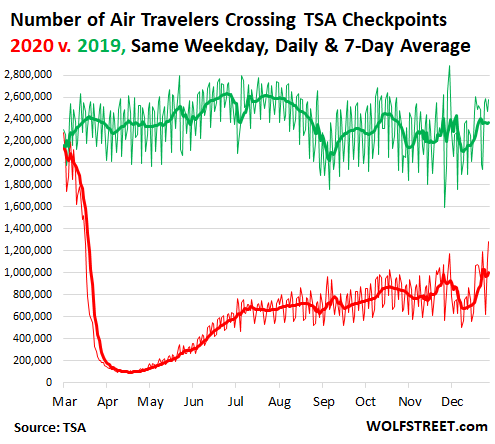 Health experts may consider the travel numbers this year a big risk factor in spreading the virus – not necessarily being on an airplane, as we’re constantly being re-re-reassured, including by the airlines themselves, that the risks of contagion on an airplane are minimal; but the risks associated with the rest of the trip, including being in an airport, and whatever mixing and mingling people are doing at their destination with people that are not in their household.

But even the biggest travel days this year in terms of checkpoint screenings were still a pale imitation of last year.

For the airlines, this is tough. But fear not for the airlines. We the taxpayers will hand them another $15 billion via the new stimulus package just signed into law over the weekend, in addition to the tens of billions of dollars from the prior stimulus package, to bail out and enrich shareholders and creditors.

This is Taxpayer Capitalism – a new entry into the WOLF STREET lexicon – whereby taxpayer capital is used to enhance private profits. That system isn’t new; it’s as old as taxpayers themselves. But the term, Taxpayer Capitalism, is new, I think. If it is, you heard it here first.