L-Shaped Recovery for Air Lines. Staking their future on a vaccine.

American Airlines on Friday, and Delta Air Lines on Thursday, warned about once-again slowing bookings. The highly profitable business air travel segment remains essentially in zombie-status, but leisure travel perked up a little in recent months, and over Thanksgiving inched up further by a microscopic amount. But total travel remains woefully down from last year even during the best day, and is now heading lower again.

The number of passengers going through TSA checkpoints to enter the secured areas at US airports during the post-Thanksgiving week through Saturday, December 5, compared to the same weekday in the same week last year, showed the deterioration: between -64.2% and -69.2%. And what the airlines warned about is a decline of bookings from these already low levels.

The chart shows the total number of TSA checkpoint screenings in 2020 (red) and 2019 (green) for each day and the seven-day moving average (bold lines). The four spikes of over 1 million daily screenings over the Thanksgiving travel period (Friday Nov 20; Sunday Nov 22; Wednesday Nov 25; and Sunday Nov 29) were a pale imitation of last year’s spikes during that time, but on the best of these days, Nov 22, the year-over-year decline narrowed to -54.9%, which was the least worst collapse since the collapse of the airline business started in March: 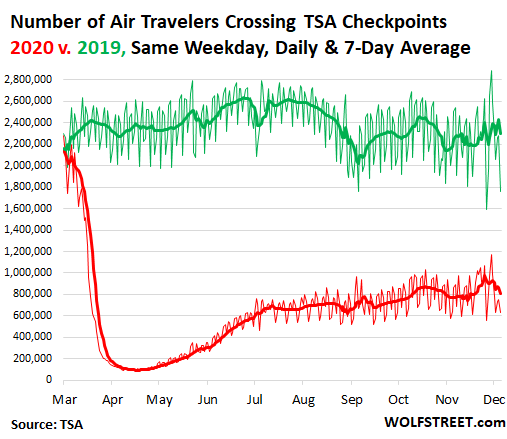 On Friday, American Airlines [AAL] released a statement, saying that “like others in the industry,” it “has seen a slowing in demand and forward bookings due to the recent acceleration of the pandemic.”

And it added that “rising COVID-19 case counts and associated travel restrictions in the immediate period leading up to the Thanksgiving holiday have resulted in a slowing of net bookings growth, which has persisted into December.”

And fourth quarter “daily cash burn,” the industry metric that was born out of the Pandemic, would come in at the high end of its previously estimated range of $25-$30 million per day “due to the slowing of demand and forward bookings referenced above and modestly higher fuel prices.”

A “daily cash burn” of $30 million translates into a cash burn of $2.8 billion per quarter. American Airlines “continues to expect the recovery in demand to be volatile and difficult to accurately forecast,” it said.

On Thursday, Delta Air Lines [DAL] had kicked off confession time. In the middle of a bunch of blah-blah-blah about employee testing and voluntary contract tracing for inbound international travelers, it said, “While we enjoyed an increase in travel volumes over the Thanksgiving holiday, in reality they were still less than half of what we normally fly during the holiday.”

“Less than half” on the best day during the Thanksgiving period was what the industry overall experienced. TSA checkpoint screenings during the Thanksgiving travel period ranged from -54.9% on the least bad day compared to the same day the prior year, to -64.7% on the worst day. Checkpoint screenings have further weakened since then. And the seven-day moving average, at -65.0%, is back where it had first been on September 4 – three months ago: 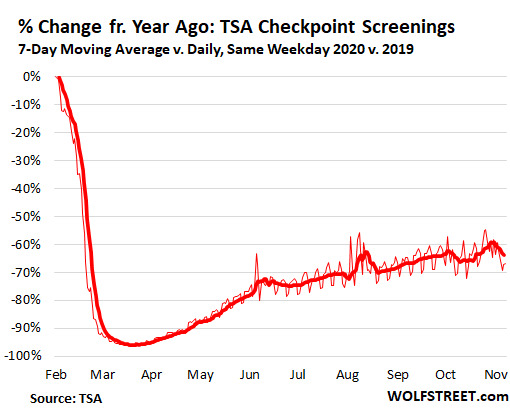 Delta said that “like others in the industry, we’ve seen some slowing of demand and forward bookings as COVID cases have risen across the U.S.”

US airlines have cut capacity to meet the collapse in demand, sidelining or retiring hundreds of planes. And they have laid off tens of thousands of people. This started early in the Pandemic and has allowed airlines to reduce daily cash burn. Despite these cuts, they need a significant increase in demand to reach breakeven.

Like the entire industry, Delta is eagerly waiting for the vaccines. Its hope of reaching the breakeven point in the spring “has been bolstered by continued positive developments with vaccines,” it said.

“While it will take months for a vaccine to be broadly distributed, it’s a clear sign of light at the end of the tunnel,” Delta said. “Widespread vaccinations among our customers and our employees will be essential to Delta’s sustained recovery and the start of our rebound.”

So there better not be any kind of hiccup with these vaccines. Everything now depends on them.

And the V-shaped recovery is starting to look suspiciously like an L. See the chart above. While the vaccines, if and when they become broadly available, will eventually allow leisure travel to recover at least partially, the big profitable segment of expense-account business travel isn’t going back to the old normal.

Businesses have figured out – have in fact been forced to figure out – how to conduct many of these types of meetings online, and have found out that this is a lot more efficient than wasting time and money on getting there and back. Sure, there will be some business travel, but the old glory days of business travel are gone, nixed by corporate cost-cutters that have now found a functional alternative. And the airlines themselves have come to accept that.

Office occupancy plunged by the most in Dallas. In San Francisco, where it had already been rock-bottom, it dipped into the single digits. Read... The State of the American Office: Suddenly Emptying Out Again Under the Second Wave