The Pandemic accelerated the mess.

Construction and real-estate development giant and funds management firm Grocon Group — which built some of Australia’s most iconic modern buildings, including three of its five tallest skyscrapers, as well as major projects in India and Abu Dhabi — declared insolvency on Friday, according to ABC News, and is putting several of its construction companies into administration (a form of bankruptcy), following years of legal wrangles, industrial disputes, and months of lockdown. The company, which is family owned, reportedly owes tens of millions of dollars to creditors, including hundreds of subcontractors.

Australia’s construction industry, which accounts for 13% of Australia’s GDP and one in ten jobs, has been in cyclical decline since mid-2019. The residential building segment has borne the brunt of this downturn — largely a result of banks being forced to rein in their reckless lending in the wake of the Royal Commission’s investigation into their dodgy mortgage lending practices. The disruptions from last year’s bushfires then added to it. By Q2 2020, according to the latest data from the Australian Bureau of Statistics, construction activity tumbled 12.5% from Q2 2019 and 20% from Q2 2018: 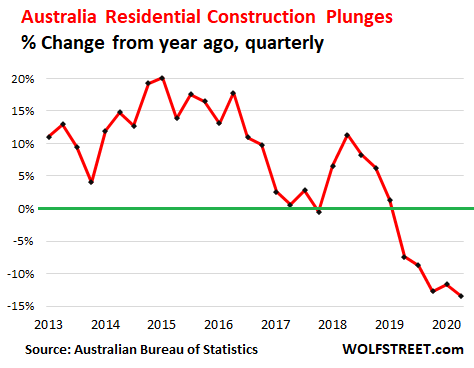 Grocon also runs a real estate investment and asset management platform in a joint venture with UBS. And it built smaller developments in Australia and recently won a AUD75 million contract to help clean up and rebuild after Victoria’s recent bushfires.

Like many construction companies, Grocon has been pummeled by the coronavirus outbreak and the strict lockdowns that ensued, bringing some projects to a standstill.

For many of the small businesses and subcontractors that do much of the hands-on work on big construction sites, the strains are already becoming unbearable. Late payment of invoices has long been a scourge in Australia, particularly in the construction industry, creating huge cash-flow problems for companies lower and lower down the value chain. While the government has pledged to take action, the problem, according to some reports, appears to be getting worse as more and companies fall behind with their bills.

The work-from-home and strict social distancing measures have put immense strain on office and apartment developers, many of whom have struggled to balance high-cost building commitments with slow sales and non-paying tenants.

But Grocon was already in deep trouble before the crisis had even begun. A major source of its woes was a joint venture with the Chinese developer Aqualand and shopping center group Scentre to build a shopping center, apartments and open space at Central Barangaroo, on Sydney’s waterfront. One of the development’s biggest selling points was the privileged views it would have overlooking the Sydney Opera House and Harbour.

The problem was that the New South Wales government had also promised the exact same views to another project on Barangaroo: the Crown’s hotel and casino development. If Grocon finished its project first, the apartment buildings would have blotted out those views. To prevent that from happening, the project’s developers, Crown Resorts and Landlease, sued the government of New South Wales to protect the “sight lines” from their developments. And they won.

For Grocon, it was a hammer blow. As a result of a confidential out-of-court settlement reached between Crown Resorts, Landlease and NSW, the Central Barangaroo development had to be significantly downsized. Yet Grocon had already shelled out a huge amount of money on the project. Facing serious cash-flow issues and mounting legal bills, the company ended up selling its stake in the project at a steep discount to its Chinese partner, Aqualand.

Besides the “challenges faced by the construction industry during the Covid-19 pandemic”, Grocon pins much of the blame for its current predicament on the Barangaroo debacle. CEO Daniel Grollo — grandson of the company’s founder — said on Friday: “It is unfortunate that INSW (Infrastructure for New South Wales) is forcing our hand to place the construction business into administration.”

The company is now suing INSW for AUD270 million in damages, on the grounds that INSW had sold the same view twice. It has also been locked in multi-million dollar legal fights with commercial property heavyweight Dexus in the Queensland courts, as a result of which it put two of its subsidiaries into administration a year ago, and APN Property in Victoria.

On top of that, it has a long history of disputes with the construction union CFMEU over occupational health and safety conditions. In 2012, blockades of Grocon sites became so intense that they ended up shutting down entire swathes of Melbourne’s Central Business District for months on end.

The concerns now are that the Grocon, one of Australia’s most emblematic builders, could be the tip of an iceberg, as more construction companies, large and small, become insolvent and follow its steps into bankruptcy, thereby exacerbating the industry’s problems. By Nick Corbishley, for WOLF STREET.