Here’s how I got walked through Denbury’s bankruptcy proceedings.

By David in Texas, a long-time WOLF STREET Commenter:

On April 24, 2020, I purchased 5 of the 6.375% bonds of Denbury Resources, due on August 15, 2021. I didn’t risk a huge amount of money. Rather, I saw this as an experiment since I had not bought individual junk bonds before. I would learn something even if it failed, and if it worked, I would make the proverbial ten-bagger or more.

Denbury is an oil & gas producer that focused on “enhanced oil recovery.” This involves injecting CO2 into underground rock formations to act like a solvent for oil, removing it from the oil-bearing formation as the CO2 travels through the reservoir rock. This process can recover, on average, an additional 10% to 20% of the original oil in place, long after the fields have been abandoned by conventional producers. A great idea when oil trades at $100; less so at $50. 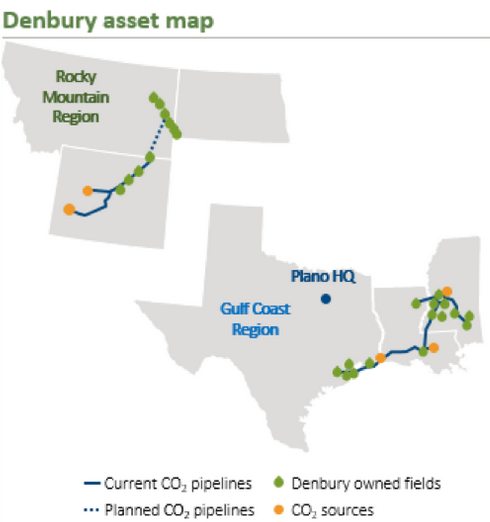 My logic: All Denbury had to do for me to make a killing was survive beyond August 15, 2021, without defaulting.

Of course, I did recognize that bonds trading at 7 cents on the dollar meant that the odds of bankruptcy were pretty high. Nevertheless, the reward-risk ratio seemed reasonable.

Making the investment wager seem even better, if Denbury only lasted until it made the next coupon payment on August 15, 2020, I would receive over 1/3 of my initial outlay back, just from interest.

Alas, this was not to be.

As a licensed paramedic, I should have known better than to invest in a company with the ticker symbol “DNR.” For those not in the medical world, elderly patients will often have a DNR (Do Not Resuscitate) order, which tells emergency medical personnel “don’t stick any tubes in me and let me die in peace.”

On June 20, there was some brief excitement. Early in the morning, someone managed to get the wire services to publish a fraudulent press release that announced that the company had received a buyout offer. The Robinhood crowd jumped on it, and shares spiked by multiples, despite a quick denial by the company. And this blew over too.

I knew I was in trouble on June 30, when Denbury defaulted on an $8 million interest payment due on its convertible notes, and announced that the company was “evaluating its strategic options.”

This reminded of the scene in the movie “Twins” after the debt collectors trashed Danny DeVito’s office and repossessed the furniture, where DeVito tells his ever-loyal secretary that he’s going to have to let her go because the “corporation is entering a restructuring phase.”

For a few weeks, not much happened, except the bonds had ceased trading. With no bid, I was a passenger on this train whether I wanted to stay on board or not.

On July 29, 2020, the long-suspected event finally happened, although not without some humor. Here is a screenshot of my news feed for DNR on that day: At 8:29 a.m, the headline of Denbury’s Chapter 11 bankruptcy filing appeared. And then the humor: at 11:33 am, this headline appeared: “Denbury Resources (DNR) Expected to Beat Earnings Estimates: Should You Buy?” This 11:33 a.m. headline has since been removed from the archives – can’t imagine why (click on table to enlarge): 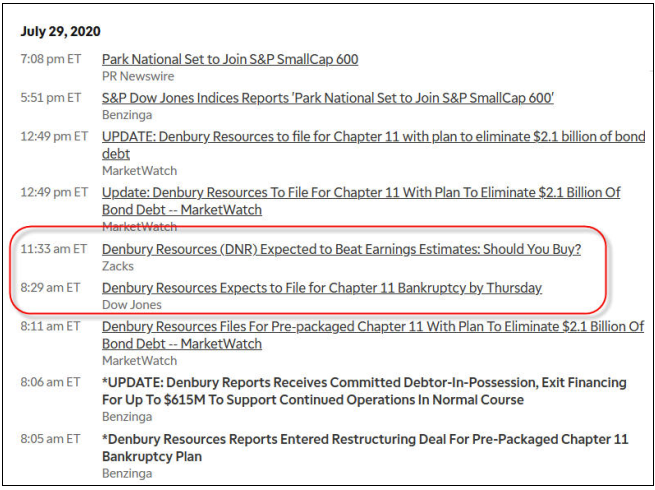 Essentially, in a prepackaged bankruptcy filing, the company and its largest secured creditors agree to a deal before the Chapter 11 filing. Everyone else receives a “take it or leave it” proposition.

Although legal notices began littering my in-box, most of these were useless boilerplate. About a week after the filing, though, I learned where I stood in the order of creditors (hint: not whale excrement at the bottom of the Marianas Trench, but still somewhere on the abyssal plain where it’s cold and dark).

These tables were from the “DISCLOSURE STATEMENT FOR THE JOINT CHAPTER 11 PLAN OF REORGANIZATION OF DENBURY RESOURCES INC. AND ITS DEBTOR AFFILIATES” – 390 pages of $250-$900 per hour legalese. I scanned the table, looking for the claim class of my bonds (click to enlarge): 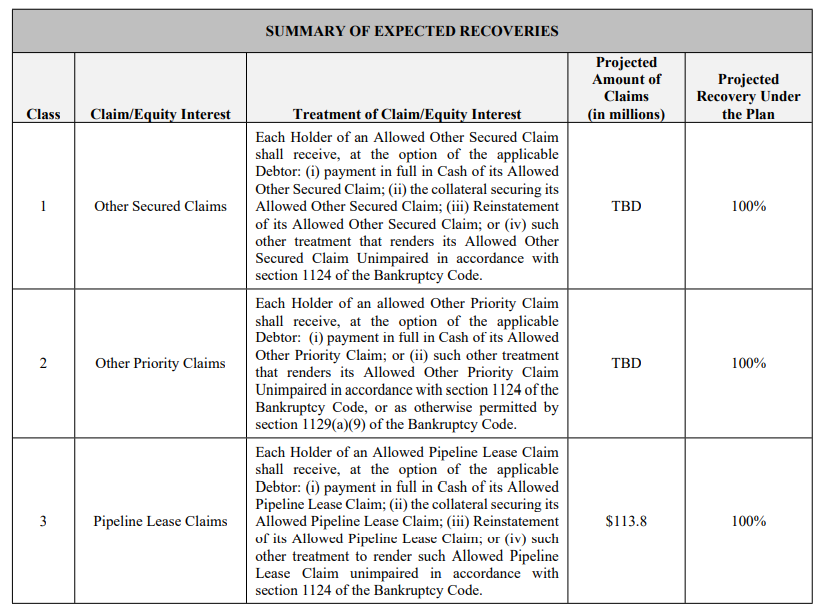 My bonds were not in the 100% recovery section. Well, surely I’ll be pretty high up. Or maybe not. I finally located my bonds in Class 7 (click to enlarge): 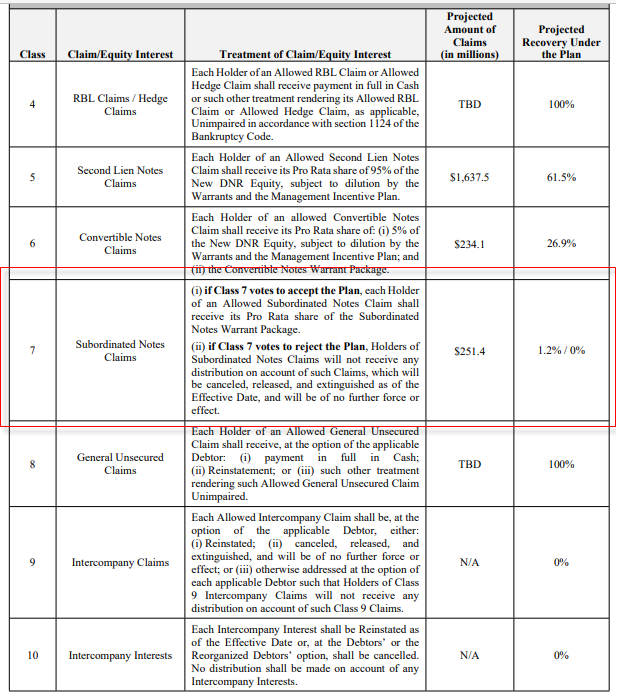 At least I wasn’t an equity holder, which got as close to zero as possible without being actually zero, namely $2.5 million split up between all old shares — the lowest class, Class 11:

After I waded deeper into the 390-page morass, I found that my class of creditor, Class 7, would receive the Subordinated Notes Warrant Package.

At this point, I had a simple choice: I could vote to accept Denbury’s Reorganization Plan, in which case I would receive the warrants, or I could reject the Plan and receive nothing.

I voted to accept getting crushed.

They sent me an online link, and the whole process took 5 minutes.

Of course, no company can go bankrupt these days without the Robinhood crowd piling in, and on September 14, DNR – by then, DNRCQ – launched skyward (unfortunately, I didn’t get a screenshot of the stock chart and the symbol is no longer available).

On September 21, my brokerage account was dinged $38 for a “Mandatory Reorganization Fee.” I suppose one of the lawyers needed lunch money.

Then, on September 28, I received 32 Series B warrants, trading under the ticker DNRRW. The new stock — the old stockholders got none of it — now trades under the DEN ticker, and the Series A warrants trade under DNRWW.

Checking the price, I found that I could sell them for $3.50 each. Reasoning that a bird in the hand was worth more than hopes for the future, I promptly sold them, and received $105.35 after commission.

The chart below shows why selling the warrants turned out to be the right call. They now trade for just over half what I made: 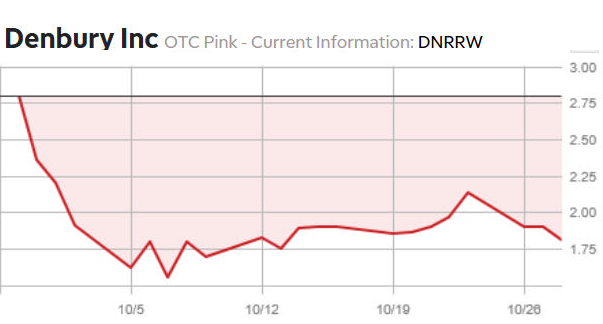 All in all, here’s the ugly math, even though I’d bought the bonds after they’d already crashed to 7.675 cents on the dollar:

If I had been an original bondholder and paid face value, my recovery would have been $105.05 from $5000, or a 2.1% recovery – for a capital loss of around 98% – not too far from the typical fate of unsecured creditors in a bankruptcy. By David in Texas, a long-time WOLF STREET Commenter

86 comments for “My Random Walk Down Junk-Bond Minefield: How I Lost 77% after Buying DNR’s Unsecured Bonds at Rock-Bottom 8 Cents on the Dollar”