Who the heck bought those shares? Robinhood traders? And who placed this press release and cashed in on it?

Oil-and-gas producer Denbury Resources – which has $2.2 billion in long-term debt and is approaching bankruptcy, having disclosed on July 15 that it had failed to make an interest payment of $3 million on its Senior Subordinated Notes due in 2023 “in order to evaluate certain strategic alternatives,” thus triggering a 30-day grace period before “default” – saw its soon-to-be-worthless shares go through a wild ride today, starting premarket when they nearly tripled.

Early this morning, a press release, purportedly issued by Denbury, appeared on Accesswire — and then also on AP and others which had paid Accesswire to carry the press release — announcing that Denbury had “received an official offer for corporate buyout at $1.2 a share. This includes transferring full ownership of the company.” The buyer would provide additional liquidity to cover the missed interest payment, and Denbury would continue as a going concern, it said.

This price of $1.20 was over five times the share price on Friday at the close of $0.227 a share. The purported buyer was not named in the press release.

Accesswire then rescinded the fraudulent press release, and it’s gone. AP replaced it with a “Page Not Found” page that included the line, “The page you’re looking for has moved or no longer exists.” An Accesswire spokesman told Bloomberg News that an investigation is ongoing.

After CEO Kendall declared the statement to be fraudulent, shares came off their spike. But during the first minutes of regular trading, they still jumped about 50%. And they closed the day still up 12% at about $0.26.

There were numerous reasons not to fall for this scam, including Denbury’s $2.2 billion in debt that would come with the acquisition of the driller. Part of this debt is now nearly worthless. Only a moron would buy a company like this before the bankruptcy filing and take on all this debt.

For example, the “senior subordinated notes” due in 2023, which are unsecured, and whose interest payment Denbury failed to make last week, they closed at 3 cents on the dollar today (via Finra/Morningstar): 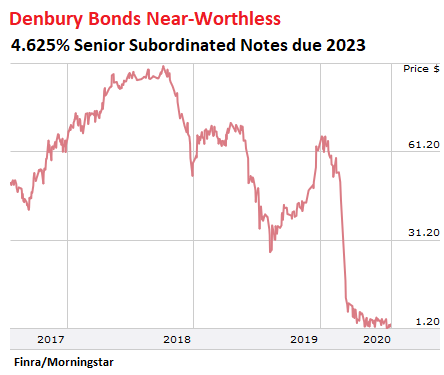 A company that would offer to buy Denbury as a going concern, as the fraudulent press release said, would take on the obligation of this bond at 100 cents on the dollar, even though the bond market is saying that these bonds are near-worthless.

Denbury’s “senior secured notes” due in 2024 are trading at 41 cents on the dollar. Funds that specialize in distressed credits generally buy these kinds of bonds, betting that the collateral that they will get in a bankruptcy filing is worth more than the price of the bond, or that they will get a big part of the new company during the bankruptcy proceedings.

The fact that the senior unsecured notes have become worthless and that the senior secured notes trade only at 41 cents on the dollar is a clear indication that the creditors will get the new company as it emerges from bankruptcy, and that current shareholders will be wiped out, holding shares that will be cancelled and no longer represent anything.

But the traders who bought these soon-to-be worthless shares this morning will – unless they unload them to an even greater fool – watch them become worthless in their accounts, where they could sit for years as a line item, representing cancelled vestiges of a knee-jerk trade based on a headline in a market that has become a zoo that has gone nuts.