The 737 Max, the misbegotten plane on which Boeing staked so much before two of them crashed, is still not flying. It has been grounded since March 2019, and the time when it was supposed to fly again keeps getting pushed out. Today Calhoun told CNBC in an interview that the company, in terms of getting the plane back into the air, was “getting very close to the finish line.”

“The Max has cost us a lot of money, and we’ve had to sort of up the ante with respect to liquidity to make up for the fact that we couldn’t ship the world’s most popular airplane,” he said. “Most popular” with whom, exactly?

Then came the Pandemic which clobbered the airlines as passenger traffic collapsed. Currently, air passenger traffic in the US is still down around 63% compared to a year ago, according to TSA checkpoint screenings. And airlines, which are in their own fight for survival, stopped ordering planes, cancelled what orders could be cancelled, and are in negotiations with aircraft makers to cancel more planes. Airlines really don’t need more planes of any kind at the moment. About $16 billion in new and grounded 737 Max planes are cluttering up storage lots at Boeing, awaiting delivery.

It is in this environment that Boeing reported third quarter results today:

Cash burn: In Q3, it burned through $5.3 billion in cash and marketable securities.

Total debt: $61 billion, up from $27.3 billion at the end of 2019. In other words, Boeing added $33.7 billion in new debt to survive this crisis and have lots of cash to burn through. This was what the Fed had in mind when it created the biggest bond market bubble and credit market bubble in history, sending investors chasing after any and all yields, and making it easy for companies such as Boeing to raise money (the Fed itself bought only a minuscule $15.8 million in Boeing bonds).

Remaining cash on hand: It still has $27.1 billion in cash and marketable securities, good to go for a while longer at this cash-burn rate.

Negative net orders: Due to cancellations so far this year, Boeing lost a net 381 orders for commercial airplanes.

Brilliant future. Boeing said in its presentation that it expects passenger traffic to “return to 2019 levels” in about three years, and a “return to long-term trend a few years thereafter,” which would be closing in on the end of the decade. That’s passenger traffic. Demand for aircraft, according to Boeing’s estimates, would continue to get hit for a decade.

The unlocked shareholder value. Over the past nine months, Boeing racked up $33.7 billion in additional debt to first borrow its way out of the 737 Max crisis and then out of the Pandemic crisis. Alas, from 2013 through 2019, Boeing blew, wasted, and incinerated $43.3 billion in cash on share buybacks to “unlock shareholder value,” as Wall Street likes to call it, in other words, to manipulate up the price of its own shares until the liquidity crisis from the 737 Max fiasco forced Boeing to stop the practice in Q2 2019. Since then, its shares have plunged by about 60%, unlocking shareholder value, so to speak. At the moment, Boeing shares [BA] are down a little over 3%, roughly in line with the market (data via YCHARTS): 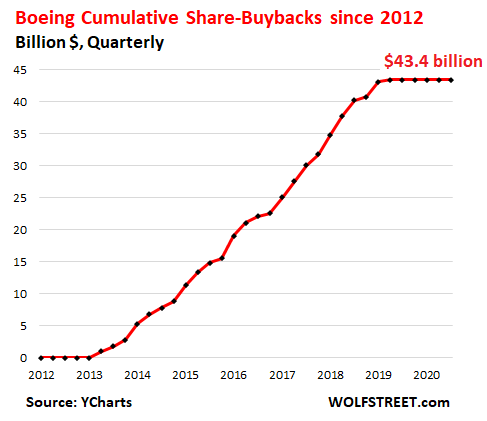