But the median price declined. Households paying for office space to work from home?

This is a massive shift. It’s not that the numbers are huge – there are just not that many new single-family houses sold in the US. But the increases in sales are huge, and they’re becoming persistent.

Sales of new single-family houses, based on contracts signed in August, jumped by 45.6% year-over-year to 83,000 deals, not seasonally adjusted, matching July deals, and a notch above June deals (79,000), according to the Commerce Department today. All three of them were the highest monthly sales since April 2007, but still well below the peaks in 2004 through 2006: 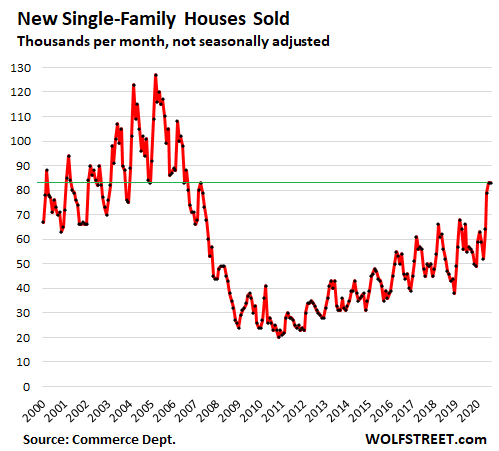 The “seasonally adjusted annual rate” – the number of sales for an entire year if sales continue at the August pace – jumped by 43.2% to 1.01 million houses, the highest since the November 2006.

This makes for three months in a row of a sharp increase in sales, following a slow-down in sales that lasted only two months (March and April).

The number of speculative houses for sale (does not include houses that homebuilders built on order for a specific buyer) has been declining since March. In other words, homebuilders are selling down their inventory of spec houses. In August, the number houses for sale dropped to 282,000 (not seasonally adjusted), the lowest since 2017. Note the pileup of spec houses during the Housing Bust when demand vanished, even as home builders continued to build. This is not case during the Pandemic: 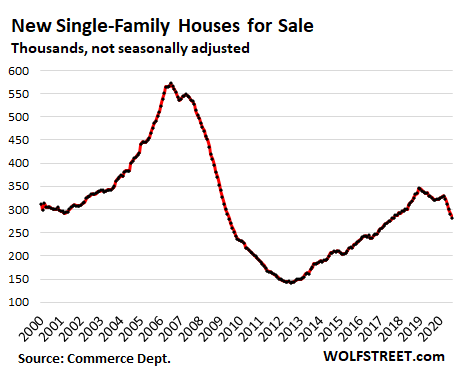 Given the higher rate of sales in August, and the lower inventory of houses for sale, supply fell to 3.4 months, the lowest since 2004.

The median price of new houses sold in August fell 4.3% year-over-year to $312,000, and has been in the same range roughly for the past four years. The twelve-month moving average (red line), which irons out the month-to-month fluctuations, at $324,000, also shows that the median price has gone nowhere over the past few years: 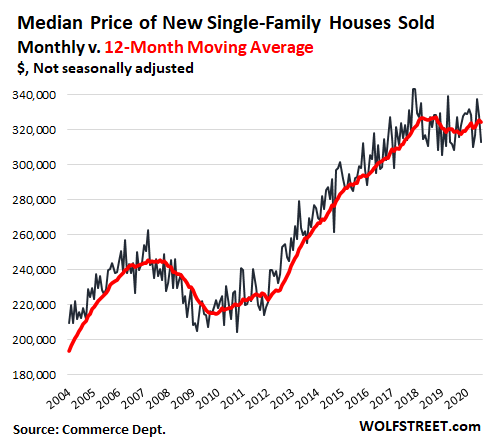 The median price is influenced by the mix of houses sold. A declining median price doesn’t necessarily mean that homebuilders are cutting prices – though it could mean that too. Builders could just be targeting lower price points to meet consumer demand, or sales could have shifted to cheaper locations (more distant suburbs or lower-cost states).

There has been a pile of anecdotal and data-based evidence that a shift is taking place from some densely populated cities, and especially city centers, and especially from rental apartments, to houses a little further out, or in more distant suburbs, or to other towns in cheaper parts of the country. This evidence includes plunging rents and rising apartment vacancies in cities like New York City, San Francisco, San Jose, or Seattle. And part of this shift is showing up in the demand for new houses.

While this still could be just a blip, with people flocking back to city centers soon, as big-city landlords are hoping, it’s harder to write off as a blip after three months of soaring demand for new houses.

There are all kinds of explanations for this phenomenon: Working from home as a permanent feature for many employees reduces the issue of commutes; the virus makes high-rise living less than desirable and folks flee for the suburbs where it’s easy to social-distance; record-low mortgage rates and trillions in QE have unleashed a veritable land rush among the people who can buy; younger couples decide to start a family and need more space…

Now that working from home is a big thing for many office workers, a couple where suddenly both work from home is quickly finding out how tough that situation is in a one or two-bedroom apartment even if there are no kids present. If working from home becomes a permanent feature in their lives, they’ll look for more space.

Thereby, office space becomes one of the things that households are now having to consider spending money on. Purchases of office furniture, electronic devices, higher-quality broadband, software, coffee, toilet paper, food, etc. has already made that transition from commercial buildings to the home.