The heavy weight of debts denominated in foreign currency. Borrowing in dollars & euros is cheap until it isn’t.

In recent months, Turks have been buying up gold — their traditional safe haven asset of choice — in even bigger quantities than usual. The average daily volume sold at Istanbul’s Grand Bazaar, one of the world’s oldest still-operating markets, surged tenfold between the start of the lockdown, in March, and the end of the lockdown, in June, according to traders cited by the Wall Street Journal. Turkey’s domestic gold production was not nearly enough to meet demand, so $15 billion of gold had to be imported from January to August, up 153% from a year earlier.

They can hardly be blamed for wanting to buy gold, the best-performing currency against the lira over the past ten years, given how quickly the currency in their pockets and in their bank accounts has been depreciating. Ten years ago, it took one and a half lira to buy a dollar. Today, it takes seven and a half. In one decade, the currency has lost 82% of its value against both the dollar and the euro, and 90% of its value against gold. 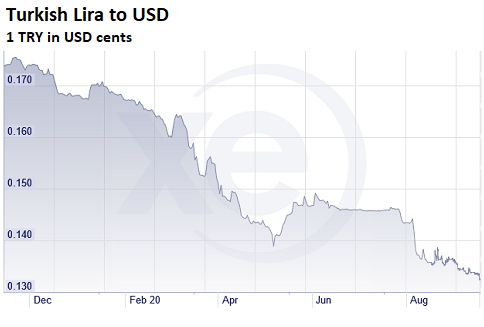 The cost of insuring Turkish sovereign debt has almost doubled. The latest rout follows a decision by Moody’s to downgrade Turkey’s sovereign debt by one notch to B2, five levels below investment grade. It also maintained its negative credit outlook for the economy, citing concerns about Turkey’s rapidly vanishing currency reserves, which “have been drifting downward for years on both a gross and a net basis but are now at a multi-decade low as a percentage of GDP because of the central bank’s unsuccessful attempts to defend the lira since the beginning of 2020.”

Turkey’s central bank has burnt through over 40% of its foreign-exchange reserves trying, clearly unsuccessfully, to prop up the lira, leaving the reserves (excluding gold) at $44.9 billion (as of 4 September). This, as Moody’s says is an “exceptionally low buffer when measured against upcoming external debt payments.”

Turkey does hold substantial gold reserves. Like it its citizens, it has bought up large amounts of gold in recent months. Due to this increase in gold purchases as well as the recent increase in the gold price, Turkey’s gold holdings are now broadly equal to FX reserves ($42.7 billion at the beginning of September). But it’s still not much of a buffer.

Turkey’s gross foreign exchange reserves are now at their lowest point since November 2005. The lower Turkey’s gross and net reserves fall, warns Moody’s, the more likely the country is to experience “a severe Balance of Payments crisis, causing acute disruptions to economic activity and further deterioration in the government’s balance sheet.” (Chart via Tradings Economics): 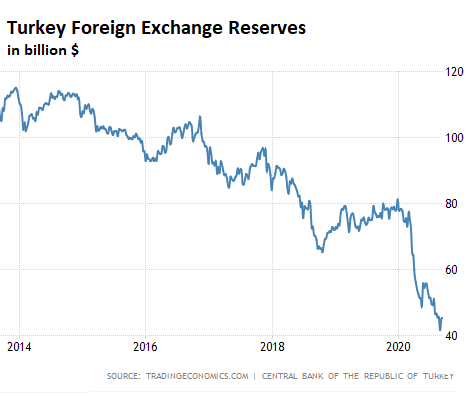 During prior periods of acute currency weakness, Turkey’s tourism industry has served as an important counterweight. The lower the currency has gone, the more competitive and attractive the country has become as a tourism destination. Today, with the virus crisis upending global travel and tourism, that is not an option.

One upshot of this is that a lot less money is flowing in to government coffers, at the same time that the government is spending more than ever, partly to counteract the devastating effects of the coronavirus crisis but also to maintain Erdogan’s expansionary monetary policies. The result has been an ever widening gulf between government revenues and government expenditure. In August, Turkey’s 12-month rolling current account deficit surged to $14.9 billion, its highest level since early 2019.

Other problems are stacking up. The economy suffered a 10% contraction in the second quarter as the collapse in tourism and the lockdown wiped out a big chunk of the nation’s revenue. The plunging lira is also making it hard, once again, for companies and the government to service their dollar or euro-denominated debts, which in April still accounted for 37% of the total debt owed by Turkish borrowers.

Inflation, at 11.8%, remains high and still well above the benchmark interest rate (8.25%), meaning that the real rate of interest is deeply negative, which puts additional pressure on the currency. Even as the lira continues its descent and inflation remains high, Turkey’s president Recep Tayyip Erdogan continues to oppose a rate hike, since it would stifle the one thing that has underpinned Turkey’s economic growth model under his rule: constant credit expansion.

On Wednesday, Moody’s delivered a second blow by downgrading 13 of the nation’s banks, including big state-owned lenders and a number of foreign-bank subsidiaries, such as Garanti BBVA, which is majority owned by Spanish lender BBVA; TEB (BNP Paribas); Yapi Kredi (Unicredit) and HSBC Turkey.

Many of these banks, as well as Turkey’s large state-owned lenders, are likely sitting on a mounting pile of non-performing loans (NPLs), though, as Fitch has warned, the scale of the problem has been largely masked by the recent explosion in lending and the forbearance rules introduced by Erdogan’s government. Thanks to those rules, the worst NPLs, or so-called Stage 3 loans, are now classified when 180 days overdue rather than the previous 90 days. By Nick Corbishley, for WOLF STREET.

For many, squatting is a desperate last resort. For others, it’s a lifestyle choice or political statement. Barcelona, ground zero of the phenomenon, attracts squatters from all over Europe. Read…  How Spain Became a Squatter’s Paradise