Alas, the housing construction bubble burst long before the Pandemic.

Australia’s construction industry accounts for 13% of GDP, and for one in ten jobs. It has been on a huge multi-year boom. And it has a huge amount of influence in Canberra. And it’s now clamoring for a bailout.

Activity in residential construction started to decline in Q4 2018 and by the first quarter this year, according to the Australian Bureau of Statistics, the value of work commenced had plunged by 25% from the prevailing levels in 2016 through Q3 2018, to A$13.6 billion. This occurred before the pandemic. Q2 data is not yet available, but the industry lobby is now wailing: 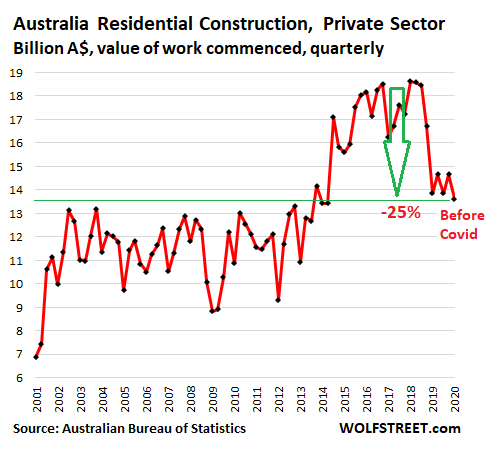 The pre-Pandemic difficulties of the residential construction industry are a result of a confluence of factors, including the housing bubble that led to overbuilding, a reliance on an endless flow of Chinese buyers — non-resident investors and immigrants — that then abated, turmoil in the banking sector due to exposure of widespread mortgage fraud, and the disruptions caused by the extensive bushfires. But then covid came along, bringing with it a whole new world of financial pain, disruption and uncertainty.

For years Melbourne has been the fastest growing city in Australia. Now, it is one of the most tightly locked-down cities on the planet. Since early July most shops, factories and other so-called “non-essential” businesses have been forced to close while the number of staff allowed to work on large construction projects has been slashed to a “practical minimum” of no more than 25% of the normal workforce.

The Victorian government tried to make up for the shortfall by fast tracking a tranche of projects in June. But most of those projects have been moving at snail’s pace since the latest lockdown, as most workers have been stood down.

An even bigger problem is the long-term uncertainty hanging over the economy. Businesses, cities and economies loath uncertainty. For developers, it makes it much more difficult to commit to new projects.

“The reality is that it is going to remain very difficult for buyers to commit to purchases several years ahead of completion in the current environment of very high uncertainty and this will keep pre-sales rates slow and prevent developers reaching pre-sale hurdles for finance,” said JLL national head of residential research Leigh Warner.

Things are not looking much better in Sydney, which together with Melbourne was ground zero for Australia’s housing bubble. Combined, the two metros account for around two-thirds of residential property value in Australia. Sydney has not been through the grinder of a second lockdown and most advanced-stage projects have so far suffered little in the way of delays, says JLL.

“Our industry is facing a bloodbath, there is simply no other way to describe it,” wailed Denita Wawn, the chief executive of the Master Builders Association, one of Australia’s most powerful construction lobby groups. In a newly published document, the business association warns that new house construction could plunge this year by as much as 27% to 125,000 units, from 170,000 units in 2019.

“Private sector investment is evaporating, and the government must step in to save businesses and jobs,” Wawn said. The Australian government has already earmarked billions of Australian dollars to support the industry. But it’s not enough, says Master Builders Association, which is asking the government to stump up an additional AUS$5.1 billion.

One has to marvel at the chutzpah of these lobbyists screaming for a bailout! The industry floated along a two-decade long property bubble, interrupted by only a few dips. It has been helped along by the Reserve Bank of Australia’s downward trending interest rate, now at 0.25%, and the fraudulent lending practices of the big banks. Developers hawked Australian homes to Chinese investors. And the government created the first-time-buyers grants, a subsidy launched ostensibly to give cash-strapped first-time buyers a leg up onto the property ladder, but which is really a taxpayer subsidy for builders building new homes. And builders overbuilt, hoping for an endless flood of Chinese non-resident investors and immigrants to sell these units to.

But now the builders have a big problem on their hands: Many of the conditions that made the last bubble possible have expired or lost their impetus — and that started well before the Pandemic. And in recent months, thanks to the Australian government’s closure of national borders, the cashed-up Chinese and other Asian investors that helped to fuel the bubble are no longer able to visit Australia, let alone buy properties. As demand wanes, the industry is dialing back construction of new supply. Makes sense. What doesn’t make sense is the clamoring for more bailouts and handouts. By Nick Corbishley, for WOLF STREET.

It was a Big Gamble that was hot for years but has gone sour after Turkish lira’s plunge amid a surge of defaults on bank debts denominated in foreign currency. Read... Turkey’s 2nd Financial & Currency Crisis in 2 Years Blossoms. Heavily Invested European Banks Look for Exit. But Not the Most Exposed Bank