The Great East Japan Earthquake and subsequent tsunami in March 2011 triggered a series of events at the Fukushima power plant that led to catastrophic meltdowns in three of its six reactors, which led Japan to take the remaining of its 54 operating reactors offline, as a new regulatory and safety regime was established for reactors to come back on line. This caused a mad scramble to switch to other forms of power generation, including power plants fired by natural gas, which Japan has to import as liquefied natural gas (LNG), which triggered a blistering spike in LNG prices that caused all kinds of enormous long-term investments to be commenced around the world, including in the US and in Australia, in order to export super-lucrative LNG into booming Asian demand.

But in 2014, the price of LNG started sinking, and in 2015, it plunged, and those investments became huge money pits – including perhaps the largest of them all, Shell’s floating LNG-factory, the Prelude FLNG, at a length of 1,600 feet, the largest floating facility ever built, and at an undisclosed cost estimated to have been in the range between $12 billion and $17 billion, now languishing off the coast of Australia (the red hull is the Prelude, the smaller ship in front of it is a huge LNG tanker; image by Shell): 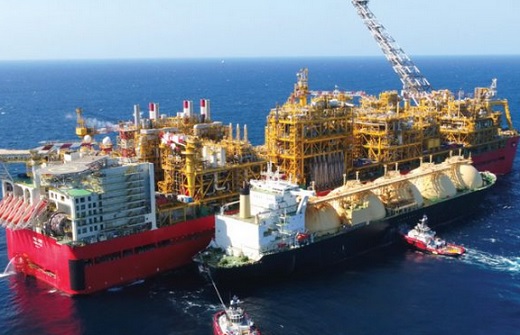 In April 2014, the average spot price of LNG at arrival in Japan was $18.30 per million Btu, according to Japan’s Ministry of Economy, Trade, and Industry (METI). This is as far as its data series goes back.

In July 2020, the average spot price of LNG at arrival in Japan was $4.10/mmBtu, according to METI, but that was up from $2.60/mmBtu in May, which had been the low point. July’s average price, despite the increase since May, still represents a 78% collapse from the price in April 2014: 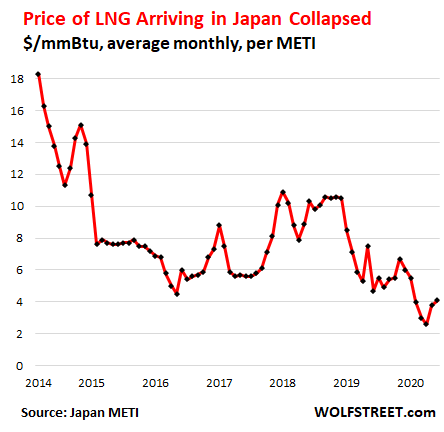 In the US, natural gas at the Henry Hub traded in 2014 in the range mostly between $4-$5/mmBtu and would later collapse below $2/mmBtu. A similar price differential to LNG for Japan was occurring in Australia. And a lot of money went to work to arbitrage this price differential, in the US, in Australia, and elsewhere.

Shell made the decision to build the Prelude in May 2011, following the March 2011 earthquake, assuming that pricing of LNG would play out long-term as it was playing out at the time in Japan, with South Korea, Taiwan, and particularly China also being huge and growing LNG buyers. The logic was that demand for LNG would go through the roof, as would prices. The hull of the ship was built in a shipyard in South Korea.

In June 2019, the Prelude, by then operating in the undersea-gas-producing Browse Basin about 125 miles off the coast of northwestern Australia, transferred the first load of LNG to a tanker, a momentous event. By that time, the average price of LNG in Japan had dropped to $7.50/mmBtu. A month later, it hit $4.70/mmBtu. Shell has not disclosed how many shipments have occurred since then.

In theory, the advantage of a floating production platform is that there are no land-based approval hoops to jump through. In theory, Shell could just position the ship in a remote area with undersea gas, develop the field, produce natural gas, liquefy it, and offload the LNG cargo onto tankers in a smooth operation.

But that’s not how it worked out.

Australia’s ABC News reported today that the Prelude  had been shut down in February, citing a statement by Shell that also said that “regular offtake of LNG, LPG and condensate cargoes” had taken place until January, and that the shutdown occurred due to “an electrical trip.”

Shell didn’t say why, after six months, the facility was still shut down and declined to say when production would restart, but said, “This is the final phase in the multi-stage, multi-faceted, restart process.”

“We will be in a stronger position to talk about timing of production and cargo once that has been completed,” Shell said, according to ABC.

“Prelude is a multi-decade project and its success will be measured by delivering sustained performance over the long-term,” Shell said.

Now there is a vibrant discussion going on among observers whether the highly complex and immensely costly engineering marvel has a future in a world that is experiencing an LNG glut, after years of huge investments in LNG projects around the world, including in the US, which has become a major LNG exporter over the past few years.

This ramped up production of LNG globally has caused prices to plunge in prior years, as the chart above shows, despite fairly strong demand. But since the Pandemic kicked off, demand has also plunged.

After US LNG exporters hit a record of 8.0 billion cubic feet per day (Bcf/d) in January 2020, the Pandemic cut demand globally, and by July US LNG exports had collapsed by 60%, to 3.1 Bcf/d, as global prices had dropped, making exports of US LNG at spot market prices uneconomical.

But the highly-complex engineering marvel, now white elephant moored by eight huge chains to the seabed off the coast of Australia, having already swallowed billions of dollars, requires very high prices of LNG to be economical, such as those seen from 2011 through 2014, but not seen since.

While LNG prices have ticked up from the lows, and while they may rise further, they remain very low, and even if they rise further would still be very low. And given the excess and growing production capacity globally, prices are not likely to return to 2014 levels.

So Shell will need to figure out what to do. The original plan was to keep the Prelude at the location for 20-25 years to develop gas fields. But in April, Shell said in a statement cited by ABC that, “due to the global economic downturn, including the sharp drop in oil price, declining markets and uncertainties with regard to the COVID-19 pandemic,” it would delay a final investment decision on developing a gas field needed to keep the Prelude operating in future years.

It comes down to costs and being bypassed by technological innovation, amid stagnating demand for electricity. Read… US Coal Consumption Plunged to Lowest Since at Least 1973. Why There’s No Hope for Coal