Globally and industry-wide, a measure of business for airlines, “revenue passenger-kilometers” (RPKs), in June was still down -86.5% compared to June last year, but a smidgen less bad than in May (-91.0%), according to the IATA’s newly released analysis. By comparison, during the six months following the 9/11 attacks – “considered to be the most severe aviation crisis prior to 2020” – revenue-passenger kilometers declined by 12% (the next three charts below via © International Air Transport Association, available on IATA Economics). 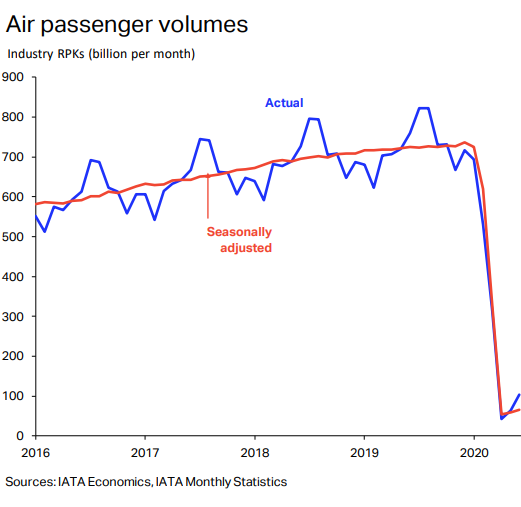 Passenger volume. Worldwide, the recovery, so to speak, occurred mostly in domestic air travel, which in June was down -67.6% compared to June last year, an improvement from May (-78.4%).

But international air passenger volume in June was still down -96.8% from June last year, and only a minuscule 1.5 percentage points up from May (-98.3%), which had been as close to zero traffic as you can get without actually reaching zero.

International flights have been handicapped by travel restrictions many countries have still in place. Even if people wanted to fly to some distant destinations either on business or vacation, they might not be able to, or would have to subject themselves to long quarantine periods, coming and going, making shorter trips practically impossible. 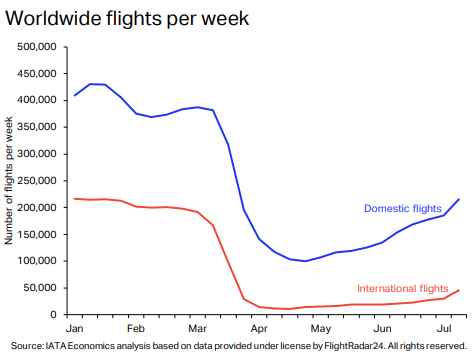 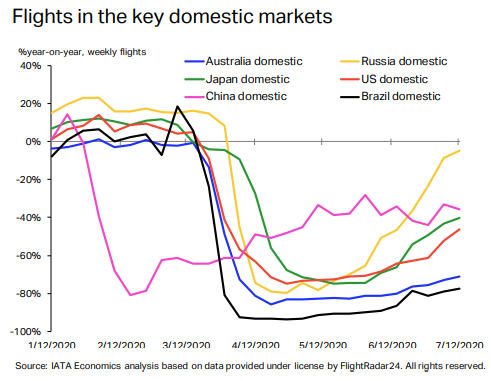 Industry-wide capacity has been slashed radically starting in February, as airlines tried to grapple with the collapse in air-travel demand. Then, from the low in April, airlines started to add some capacity. In June, industry-wide capacity, as measured in available seat-kilometers (ASKs) was still down -80.1% from June last year, but a slight improvement from May (-86%).

Airlines have been adding capacity on domestic flights (red line) faster than air travel has grown (blue line), widening the gap and contributing to the cash burn (the next two charts below via IATA’s Presentation, © International Air Transport Association, available on IATA Economics): 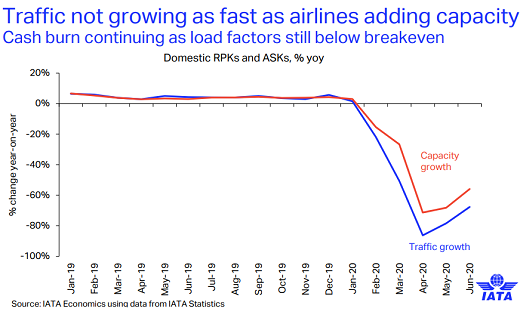 The industrywide passenger load factor – the percentage of available seats filled – remained at an all-time low in June, at 57.6%, down by 26.8 percentage points from June last year, despite the aggressive reductions in capacity in February, March, and April.

The IATA forecasts a funny-looking V-shaped recovery in revenue passenger-kilometers (RPKs) which sees the 2019 level of 8 trillion RPKs to be “regained only by 2024”: 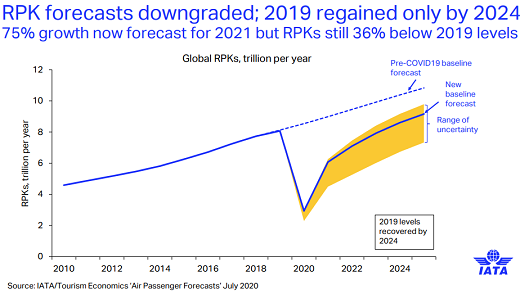 The data for the IATA report reaches into mid-July. But in July, renewed outbreaks in the US have started to hit the air travel recovery in the US, and since early July, major US airlines started warning about renewed declines in ticket sales.

TSA checkpoint screenings, which measure on a daily basis the number of people entering into the security zones at US airports, were down -78.0% yesterday (Tuesday) compared to Tuesday in the same week last year, according to TSA data this morning. This was the biggest year-over-year decline since June 28.

The seven-day moving average, which smoothens out the day-to-day volatility but by definition lags a few days behind, has edged down from its “peak” in early July and has now been essentially flat for July, with the recovery of passenger volume having started to backpedal slowly since early July: 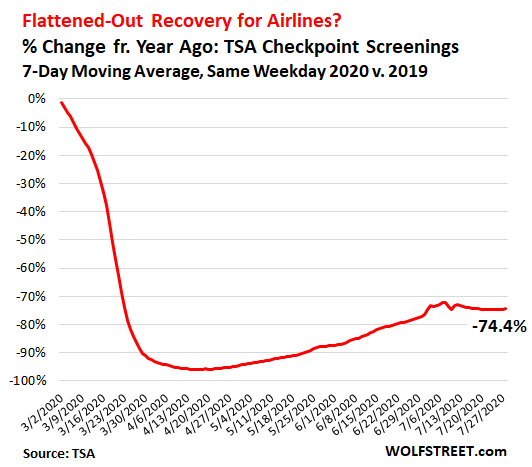 52 comments for “Going to Be Tough for Airlines, Full Recovery Moved to 2024: IATA”