An even greater share of retail traders lost money with these highly leveraged derivative contracts during the Pandemic than before.

This type of highly leveraged Forex trading is illegal for retail traders in the US, but it’s perfectly legal in the UK, the EU, Australia, South Africa, and other jurisdictions. They’re called “Contracts for Difference,” or CFDs, and they’re designed for retail traders. The hope is that you make a lot of money quickly with little investment. The risks are huge. In theory, you could lose a lot more than your account value.

And most traders lose money. By “most” I mean between 60% and 80%, depending on the brokerage they’re trading with. We’ll get to the list of brokers in a moment. This is an astounding data set that gives fascinating insights into just how many retail traders who engage in highly leveraged foreign-exchange trades lose money.

What are CFDs and how are they different from futures?

A CFD (Contract for Difference) is a contract between the trader and the broker. The security, traded on online platforms, is calculated by the price change of the underlying asset – in our case, a currency pair – between trade entry and trade exit.

Unlike futures contracts, there is no expiration date and no time decay. A CFD trader never owns the underlying asset.

Forex CFDs are mostly unregulated. But there are some rules. The European Securities and Markets Authority (ESMA) limits leverage to 30:1 for major currency pairs and to 20:1 for non-major currency pairs. In South Africa, leverage can be much higher, and just to pick on one broker, FXTM offers up to 2,000:1 leverage, which seems nuts to a mere mortal like me.

Warren Buffett infamously said, “My partner Charlie says there is only three ways a smart person can go broke: liquor, ladies and leverage,” referring to Charlie Munger. “Now the truth is, the first two he just added because they started with L. It’s leverage.”

In other words, a CFD is a highly leveraged derivative contract designed for retail traders, where trading does not involve an exchange. Instead, the trading takes place over the counter between the trader and the broker or a market maker.

In the US, trading CFDs is illegal under CFTC and SEC rules, given that they’re a derivative product that is traded over the counter, and that they’re highly leveraged and come with high risks of large losses.

The UK’s Financial Conduct Authority (FCA) requires that brokers disclose on their homepage in the UK what percentage of their accounts in the UK lose money trading CFDs. And this is where the data of these money-losing traders comes in.

A guy whose firm ranks Forex brokers started manually collecting these rates every month from the 36 brokers in the UK that offer CFD trading. He calls the data series, “Traders that Lose Money.” And he sent me this data in a spreadsheet.

“Nobody else records this data each month,” he told me. He is Justin Grossbard, CEO of Compare Forex Brokers. He also pointed out a peculiarity of brokers’ disclosures on their websites.

While all brokers in the UK have to disclose every month the percentage of money-losing CFD retail accounts on their UK-homepages, they don’t have to disclose it on their homepages they show in other countries, such as what you get in the US or Australia.

For example, here is CFD broker Pepperstone, one of the 36 brokers on the list (#30). I just looked up the homepage you get in the UK (the “…-en-gb” at the end of the URL). Sure enough, it says in bold at the top of the page, as required by the FCA, that 78.6% of its retail investor accounts lose money when trading CFDs with Pepperstone: 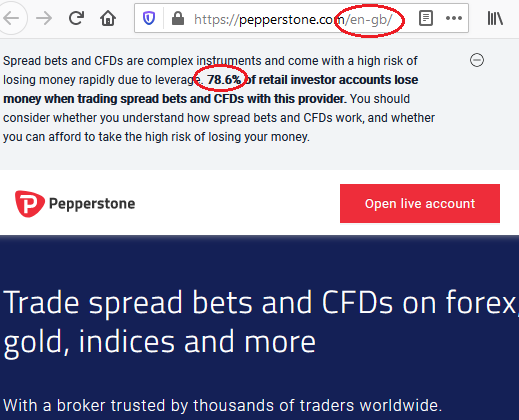 But when you go to the homepage of Pepperstone that you get by default in the US, namely the Australia version of the homepage, there is no such disclosure. It just urges you to open an account: 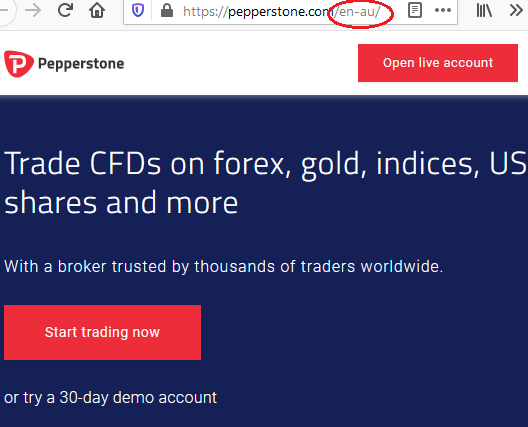 So here is the list in alphabetical order of 36 CFD brokers in the UK, the percentage of their client accounts that lost money as reported in pre-Covid February, and in July, and the difference between the two months (right column) in percentage points. And an interesting tidbit: 25 of the 36 brokers reported in July that a larger, and in some cases a much larger, percentage of trading accounts lost money in that reporting month than in their February disclosure. And only five brokers reported fewer money-losing accounts. (data via Grossbard, on his UK Forex Broker List).

We can only speculate why more traders would lose money during the Pandemic. Perhaps it was triggered by the currency gyrations that have taken place in those months that left them even more often than normal on the wrong side of the trade; or perhaps traders who were stuck at home with nothing else to do were trading constantly, giving more traders more opportunities to lose money, and so they took advantage of those opportunities.

67 comments for “Don’t Try This at Home? 60%-80% of Retail Traders, Depending on Broker, Lost Money Trading Forex CFDs”