But the downturn in the goods-based sectors started in 2018. US exports are now down 37% from that peak, imports down 25%.

World trade in goods plunged by 12% in April from March, after having already dropped 2.4% in March from February. This plunge of the Merchandise World Trade Monitor, released by CPB Netherlands Bureau for Economic Policy Analysis, was by far the largest month-to-month drop in the history of the data going back to 2000. Compared to April last year, the index was down 16.2%.

But world trade had already taken a hit starting in late 2018, as tariffs, counter-tariffs, and threats of tariffs jiggled supply chains around. By December 2018, the index was down 1.2% from a year earlier. Year-over-year declines became a regular feature starting in June 2019. Then in March, the index dropped 5.4% year-over-year, and in April 16.2% year-over-year. This brought the index down 18% from the peak in October 2018, and back to where it first had been in January 2008: 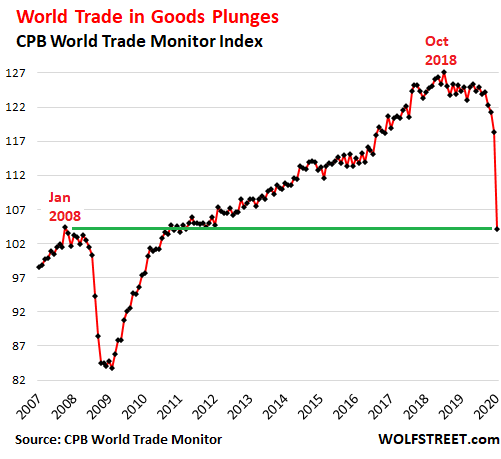 US Exports and Imports.

On June 25, the Commerce Department released its advance estimates for May, which showed further deterioration in both exports and imports: 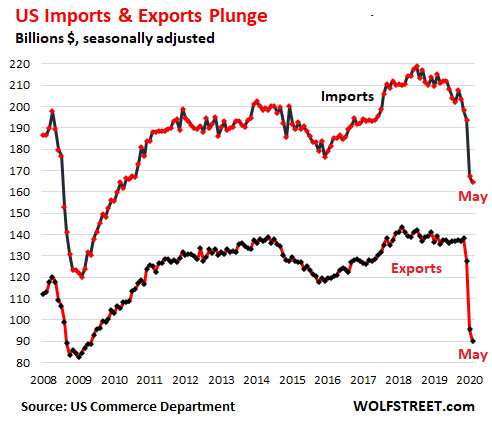 The continued deterioration in May in the US is a harbinger of what the trade data for the rest of the world, and for the World Trade Monitor, will look like next month.

In the Eurozone, exports in April, according to the World Trade Monitor, collapsed by 30.5% year-over-year, and imports by 26.7%, both to the lowest levels in the data going back to 2000: 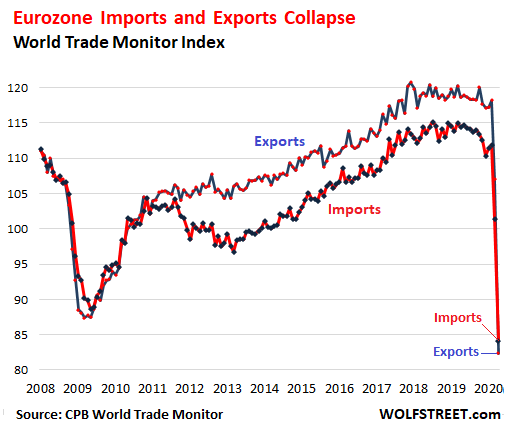 The CPB obtains the data for the World Trade Monitor and for the individual countries from the official statistical data releases by each country. The exports of all major regions and countries plunged in March and April. There is one exception: China. In China, based on the official data released by the Chinese government and used by the CPB, neither imports nor exports ever really got hit this year at all.

This contradicts absolutely everything else we know about trade with China, including what major container carriers have said, and how they have slashed capacity to and from China as trade between China and the rest of the world spiraled down. But miraculously, it doesn’t show up in China’s official data: 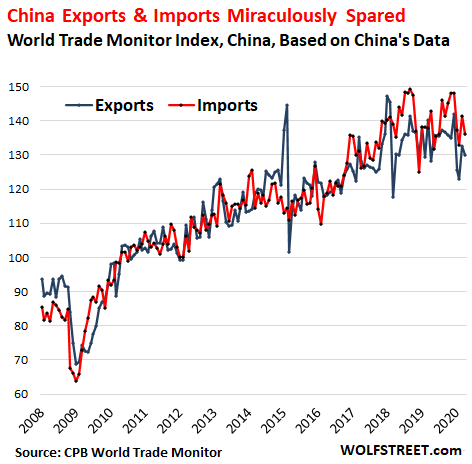 China’s data has always been whatever the government wants the world to think it is. But the pandemic elevated China’s data to new and unprecedented levels of deep-fake status all around.

With imports and exports, however, cheating invariably comes to light: China’s exports show up as imports by other countries, and China’s imports are other countries’ exports. When global trade goes to heck in a straight line – in violation of the dictum printed on every WOLF STREET beer mug – but only China’s imports and exports pretend nothing has happened, then we have to wonder: Who exactly was China trading with? The Martians?