Look, I’m rooting for Tesla, a tiny auto maker shaking up the giants, with its global market share of 0.5% and $862-million loss in 2019. But Tesla gets to have supernatural shares that can go anywhere at will.

OK, I know, nothing matters, fundamentals certainly don’t matter, and for Tesla, they never have mattered to begin with, but this is nevertheless quite a spectacle. The other day, I swear, I saw Elon Musk walk on water, strolling on the Bay at lunch time, not far from the factory in Fremont. He’s performing miracles on a daily basis.

Tesla’s shares [TSLA] closed at a new closing high today of $949.92. This beat the prior closing high of February 19 of $917.42. But it remains a tad below the intraday high of 968.99 of February 4. So let me walk you through this in chronological order because it’s just too juicy to pass up.

On February 4, 2020, when Tesla’s shares hit $968.99, I posted the “WTF chart of the year,” calling Tesla a “Supernatural Phenomenon.” The shares had surged 170% from mid-December. And Tesla’s market cap had skyrocketed during the less than two-month period by over $110 billion:

Then it came unglued. On the way down, on February 13, Tesla sold new shares at $767 a share and collected over $2 billion in cash from investors. This was a wise move for Tesla. Perhaps Musk saw that the pandemic might be shutting down the factory in Fremont, after it had already shut down the factory in Shanghai, and perhaps he saw that Tesla would burn through cash a lot faster during the pandemic than before, and it was a lightning-fast drive-by share sale.

And shares swooned. Then on March 18, Tesla shares plunged another 16% to $361.22, amid allegations that it was flouting the lockdown order of Alameda County, by running two full shifts at its Fremont factory. This was a confusing story with allegations and counter-allegations, that then threatened to spiral out of control, and we won’t get into it.

Nevertheless, that fateful March 18, I posted the new version of the WTF chart of the year, one of the most majestic double-sided spikes:

And then the whole circus started all over again. Since March 18, the stock has re-skyrocketed 163%, and Tesla’s market capitalization has re-skyrocket by $110 billion, which brings us to the new-and-improved Double-WTF chart of the year. 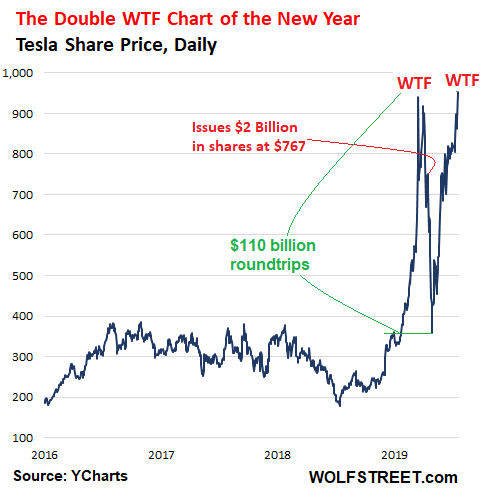 Discussions of Tesla’s fundamentals are an exercise in futility, because they never matter. Tesla builds cool cars and it builds solar panels. The US solar panel industry has gotten crushed by China’s state-supported solar-panel industry. And the US auto industry is not a growth industry either. Unit sales in the US peaked in 2016, at just a tad above where they’d peaked in 1999 and 2000. Auto sales in the EU are even worse. And even in China, the biggest auto market in the world, auto sales declined two years in a row, not counting the fiasco in 2020.

So solar panels and autos are tough industries to compete in.

But Tesla put EVs on the map, and made them cool, and it caused an entire industry to take notice, and after years of blowing them off, automakers are now all scrambling to produce EVs in the hope that they can be manufactured profitably someday, and that’s a great thing.

And the luxury sports-sedan makers such as BMW and Mercedes – which are in the same pricing segment as Tesla’s vehicles – have gotten their sacred German pie eaten into by Tesla and now they too take EVs seriously. Shaking up these German automakers was quite an accomplishment. And it was a sight to behold.

Tesla also accomplished an astounding feat in that it made $0.08 per share in net income in Q1, after losing $4.10 a share in Q4. For Tesla, which has never in its entire existence made an annual profit, any quarterly profit is a big and rare feat, no matter how small the profit. But at this rate – losing over $4 dollars one quarter and making 8 cents the next quarter – it’s going to be tough to make a profit for an entire year.

And that doesn’t even account for the massive shock this industry is experiencing this year. The numbers Tesla (and the others) will post for the year will be a doozie. This year is going to be a mess for everyone.

So if Tesla manages to someday make an annual net profit of $1 a share, that would be a huge accomplishment. For automakers, a P/E ratio of 20 during good times is high. OK, allow Tesla a P/E ratio of 40 because it’s Tesla and because Musk walks on water. At $1 a share in annual income, it’s shares would then be richly valued at $40. You can’t even find that price on the charts above.

Look, I’m rooting for Tesla. It’s a tiny automaker among giants. And it’s shaking up the giants and getting them to react. But it’s still just a tiny automaker. In 2019, Tesla delivered 367,500 vehicles globally. The entire industry delivered 72.6 million vehicles globally. So Tesla had a market share of 0.5% (half a percent). In 2019, most of the automakers were profitable. Tesla lost $862 million.

In terms of market cap, the US giants GM (market cap of $44 billion) and Ford (market cap of $30 billion) combined are just 42% of Tesla’s $176 billion. The thing is, Tesla is one of the companies that have supernatural shares that can go anywhere at will.

107 comments for “Tesla’s Double-WTF Chart of the Year”