Here’s what US airlines are going through: The TSA has been reporting the number of daily checkpoint screenings. This is the number of people in the US who got on a plane for at least the first leg of a trip. A connecting flight would not trigger another screening. This is a rough indication of passenger air traffic. 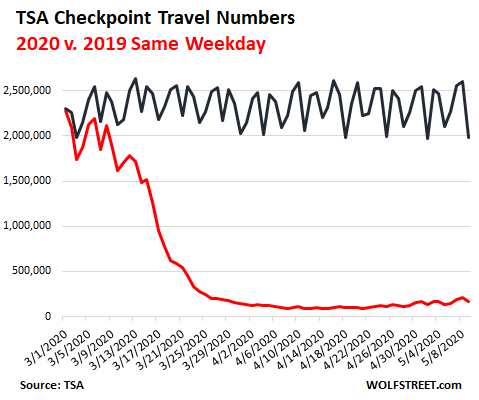 Airlines reported that some flights have only a handful of passengers, some just one passenger. On these flights, crew members outnumber passengers. And this comes despite massive cuts in flight schedules. For example, United Airlines has cut its original schedule from the beginning of this year by 90%. 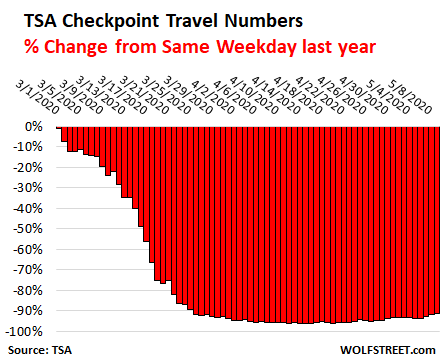 And this plunge in passenger volume has already had an impact on airline revenues in the first quarter, though the plunge in passenger traffic didn’t start until early March. Revenues for the top seven airlines in the US combined fell by 17.5% in Q1, largely due to the collapse of the last three weeks of the quarter:

The chart below shows operating revenues by all US airlines, including domestic and international flights, provided by the US Bureau of Transportation Statistics. The BTS has not yet updated its data for Q1. So I estimated Q1 based on the actual year-over-year revenue decline at the top seven US airlines in Q1 of 17.5%, assuming that this would be the combined percentage decline of revenues at all US passenger airlines combined (there are dozens).

And to get a feel for where Q2 might be, I assumed that passenger numbers will increase somewhat in the remaining part of the second quarter, and that the total year-over-year revenue decline in Q2 would not be 94.8%, as the quarter-to-date screenings suggest at the moment, but only 85% year-over-year. My estimates for Q1 and Q2 are in red: 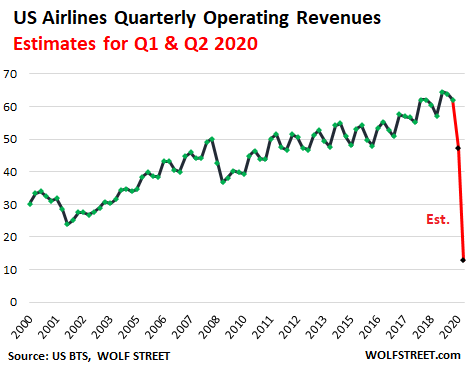 Note in the chart above the two prior events that caused sharp revenue declines: 9-11 and the Great Recession. And in each case, it took years to recover:

But those two declines were mere dimples compared to what airlines face today, and it took three and four years to recover. In other words, the recovery from the lows in Q2 this year could take an amazingly long time and could be terribly rough.

On Friday after hours, United Airlines disclosed in an SEC filing  that it had abandoned its private $2.25-billion junk-bond offering that it had announced on May 6. It failed to attract sufficient interest from investors at the original terms.

Upon the news, United shares [UAL] dropped 5% within minutes in after-hours trading and then retraced a portion of the loss to end at $24.93. They’re down 72% year-to-date.

Moody’s rates United Ba2, two notches into junk, and put the airline on review for a downgrade. Moody’s rated the secured notes that United abandoned Ba1, one notch into junk (my cheat sheet for corporate credit ratings). The collateral for those notes is a pool of 360 older planes.

But investors were not amused by that collateral. According to Bloomberg, citing sources familiar with the matter, investors were concerned that the planes weren’t valuable enough given the risks United faces.

To overcome that lack of interest, United raised the yield to 11% in pricing discussions. And it added a “make-whole” clause under which it would have to repay the bonds at a substantial premium over face value if it files for bankruptcy. In the end, under these terms a deal was reached, but United pulled the offering and will try to obtain better terms.

In terms of the payroll-assistance bailout, United announced in a memo to employee last Monday that it would lay off at least 3,400 management jobs, or at least 30% of its white-collar workforce. The layoffs would take effect October 1. In addition, all management employees have to take 20 days of unpaid leave between May 16 and September 30. Some will also be assigned a four-day workweek.

Turns out, the $5 billion in payroll assistance requires that United would have to keep the workers on the payroll till September 30. So OK, on October 1, bye-bye. United is probably not the only company that will do that.

My market-cap weighted index of the seven largest US airlines has been in the same beaten-down trading range since March 18, despite the blistering rally in the S&P 500 index (market cap data via YCharts): 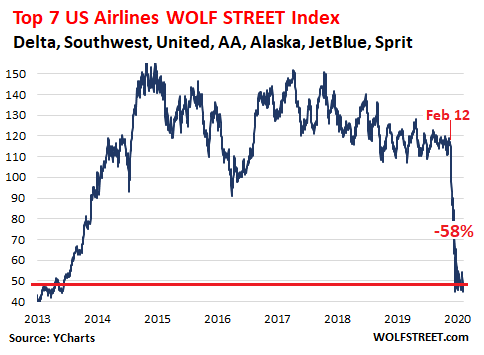 Warren Buffett likely made similar calculations, in addition to whatever else he looked at, when he sold all his airline stocks in mid-crash in March. My airline index is down 58% from February and 67% from the spring in 2015. Blood is on the tarmac – which should have been a clear buy-signal for Buffett, but he didn’t buy – he sold the entire stake and washed his hands off the entire industry.

Some think that there will be a V-shape recovery for airlines, and they’re baffled that Buffett sold the entire stake in mid-crash, but the airlines themselves don’t expect any kind of serious recovery any time soon. They’re struggling with all their might to hang on, and they’ll be raising money any way they can to survive this historic collapse of travel patterns – and for them, survival is what this is all about.

155 comments for “It Gets Rough for US Airlines: Why Buffett Dumped His Airline Stocks Though There Was Blood on the Tarmac, Which Should Have Been a Buy Signal”