How the Virus Crisis Flipped UK Retail Sales Upside Down.

In the UK, where consumers are generally a sturdy lot when it comes to borrowing and spending, retail sales just had their worst month since records began in 1996, according to the UK’s Office for National Statistics (ONS). Sales at “non-food stores” plunged 20.9%. This does not include auto sales or gasoline sales. And sales at clothing and shoes stores collapsed 35.7%. But online sales rose, sales at supermarkets jumped, and sales of alcohol (the drinkable kind) spiked.

Non-food stores are broadly considered non-essential and have therefore been closed since March 23, when the UK’s lockdown began. They’d already been through a sharp decline in the second half of 2019, as some large department store chains entered the UK equivalent of a bankruptcy restructuring. This was followed by an uptick early this year. The first half of March was likely in that range. But the lockdown did a job on them. In April, they’re faced with near-zero sales: 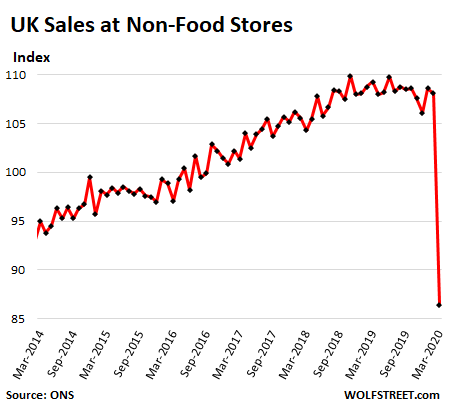 As has happened in many other countries, there was a boom in sales of food and household items at supermarkets, powered by some panic-buying, but also by the shift of consumption from restaurants, bars, cafeterias, work locations, hotels, and the like, to the home. This includes alcohol sales, which spiked 32.6% from February to March.

Sales at food stores, such as supermarkets, jumped by 10.2% from February to March, and by 11.3% year over year: 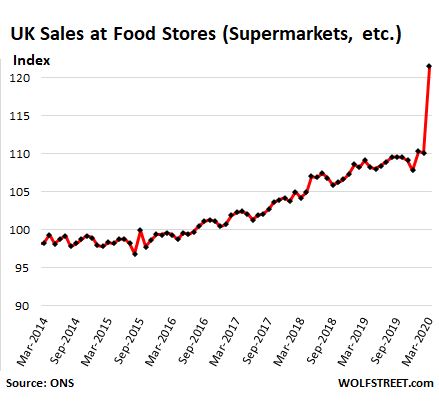 All combined, total retail sales, including online sales, food sales, non-food sales, and sales at gas stations, but not including auto sales, dropped 6% in March compared to the same month a year earlier, the worst decline in the history of the data.

The worst hit segment of the non-food retailers was clothing and footwear, whose sales plunged 35.7% year-over-year. Even by today’s standards, when more and more things seem to be going to heck in a straight line, it’s a staggering collapse, especially considering the UK’s coronavirus lockdown only began on March 23. 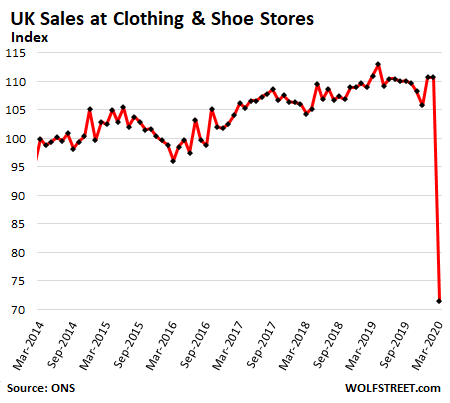 Sales of household goods plunged by 8.9% while fuel sales slumped 23.9% y-o-y as millions of Brits, confined to their homes and estranged from their workplaces, stopped driving. Besides supermarkets, one other outlier was department stores, which clocked up a 2% rise in sales, though according to the ONS a large chunk of these sales were online.

Which brings us to the one other main beneficiary (apart from supermarkets) of this unprecedented retail collapse:

Online sales — including sales by the online divisions of brick-and-mortar retailers — increased in March by 5.8% year over year. But that still only brings the sector close to the peak it was at six or seven months ago. Nonetheless, online sales now account for almost 23% of retail sales in the UK.

Note, this retail sales data does not include new and used vehicle sales. In the US auto sales are included in the retail data and are the largest segment. And there are many other differences. So this percentage of online sales to retail sales is not comparable to the US ecommerce percentage of retail sales.

Two areas where online vendors have conquered new ground since this crisis began is in household goods, whose sales rose 14% compared to February, and food sales which surged 101%. In fact, demand for online food deliveries increased so much during the early stages of the lockdown that many people struggled to get a delivery slot, particularly in heavily populated areas such as the South East and the North West. In some places, people are having to wait well over a week to have their food delivered.

But many people would still prefer to wait that long than venture out to a physical store. The big fear for shop owners is that once many of these shoppers become accustomed to shopping online from the comfort and ease of their own home, they will continue to get deliveries of food and other items instead of visiting brick-and-mortar shops.

“Staying home has seen a surge in sales of food and drink; computing equipment, toys to keep children entertained, and unsurprisingly health-related goods too,” said Paul Martin, UK Head of Retail at KPMG. “Yet our high streets are completely void of footfall, and non-food categories like fashion have been forced into hibernation.”

A foretaste of what lies in store

Given that the reporting period for March (March 1-April 4) included just two weeks of social-distancing measures, this unprecedented collapse in brick-and-mortar sales is likely to be nothing less than a foretaste of what lies in store in April, a month in which all but the most essential brick-and-mortar stores will be closed for the entire duration of the reporting period.

The industry was already reeling before the lockdown. Retailers had been hit by a combination of intensifying online competition, surging business rates, low profitability, high costs, escalating rents and maxed out consumers. A total of 117,000 retail jobs were lost and 14,500 stores were closed in 2019 alone as a result of brick-and-mortar retail companies hitting the wall or simply cutting costs in a desperate bid to stay afloat, according to a report published by the Centre for Retail Research.

Since the lockdown began, a spate of major brick-and-mortar players have entered administration (a form of bankruptcy), including Cath Kidston, Debenhams (for the second time in a year), and Oasis & Warehouse. According to Alvarez & Marsal, many other brick-and-mortar retailers were already experiencing negative cashflows that are now being amplified by the virus crisis. And so were many of the owners of the commercial real estate these retailers occupy, including mall giant Intu, which was already on the verge of collapse before the coronavirus crisis began. And this crisis will speed up that process. By Nick Corbishley, for WOLF STREET.

Due to “the interconnectedness of the financial system” fund gatings can trigger “contagion risk” with “the potential to become a systemic issue,” warns Fitch. Read… Market Mayhem Meets Liquidity Mismatch: “At Least” 76 Mutual Funds in Europe Were “Gated” in March