Demand is a lot weaker in some places than in others. 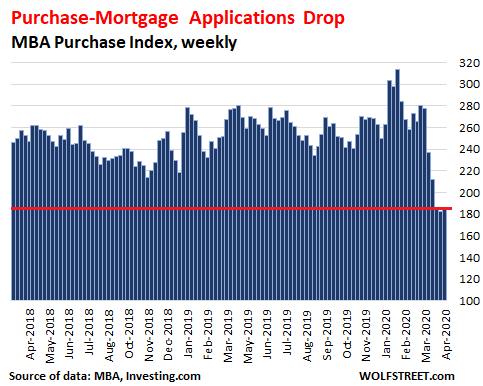 Demand by nonresident foreign investors, who come in with their own cash or finance their purchase overseas, is not reflected in purchase mortgage applications, even during good times. And now, those nonresident investors have largely been locked out due to flight bans and limits on border crossings, and demand by them has collapsed.

Demand by large US investors, such as REITs, that fund their residential property purchases at the institutional level, is also not reflected in purchase mortgage applications. But these investors are now struggling with a liquidity crisis and turmoil in the mortgage-backed securities market. Their own shares have plunged, and they have other things to worry about.

Demand by “instant buyers” or for short “iBuyers” is also not included in the mortgage applications data. And this demand has collapsed to zero. These “iBuyers” are companies that buy homes and flip them at what has turned out to be steep losses. These newfangled home flippers with an app include Zillow [Z], Redfin [RDFN], Opendoor, iBuyer, and others.

All of these companies were losing money on their home flipping even when the market was still hot and prices were rising. Now the market has turned on them. They have frozen all home-buying activities, and they’re stuck with the homes they have bought and now have a hard time selling. Opendoor, one of SoftBank’s fake-valuation stars, and iBuyer have already announced laying off about 35% of their staff.

None of these three sources of demand – nonresident foreign investors, large US investors, and iBuyers – are reflected in the plunging purchase mortgage applications. But demand from those three sources has evaporated. So the drop in demand is likely larger than the 31%-35% drop depicted by mortgage applications, which reflects mostly regular folks trying to buy a home.

Demand is a lot weaker in some places than in others.

Purchase mortgage applications have plunged a lot more in California, New York, and Washington than the national average. These states have kicked off the lockdowns before others.

In addition, their largest markets are among the most expensive in the US, where even modest homes can exceed the limits for conforming mortgages that would be backed by the government. In many of these markets, a home with a median price would have to be funded with a “jumbo” mortgage, which banks have to deal with on their own. Credit standards are now tightening across the board, as lenders are getting cold feet in the era of forbearance, and the availability of jumbo mortgages has plunged.

For the survey week ended April 17, purchase mortgage applications in California and Washington plunged by 48% year-over-year, and in New York by 58%, according to the Mortgage Bankers Association. This is the progression over the past five weeks for each of the three states: 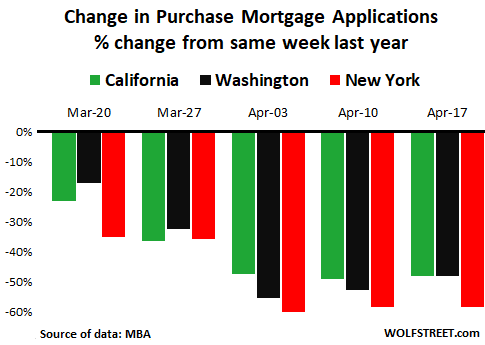 Drilling down by metro shows sharp differences. The American Enterprise Institute’s AEI Flash Housing Market Indicators used purchase mortgage “rate locks,” based on Optimal Blue data, to get an advance indicator of home sales volume. A rate lock occurs when a lender and a borrower agree to lock in a specific interest rate for the period from the offer of the mortgage through closing.

The table below shows the 20 metros where year-over-year volume of rate locks for weeks 15-16 (lumped together to keep Easter in both data sets) has dropped the most compared to the same weeks last year:

But refi applications are red-hot.

Homeowners with existing mortgages are salivating over record-low mortgage rates and are scrambling to refinance their mortgages. Refi applications in the week ended April 17 nearly tripled from a year ago, and now account for 75% of all mortgage applications: 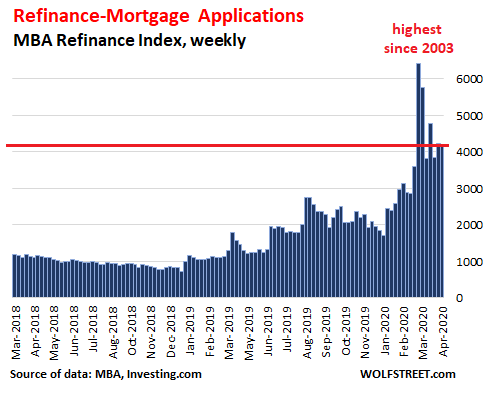 Mortgage standards are tightening, and the availability of jumbo mortgages plunges as lenders pull back. Read… Going to be Tougher for Lots of People to Even Get a Mortgage. Expensive Housing Markets Most Affected