Gut-wrenching tally balloons. Gig workers and contract workers are starting to be included. Florida tries to catch up. 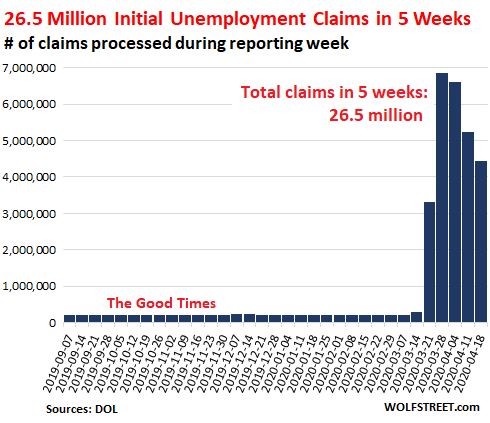 The unemployment claims reported today by the US Department of Labor are those that the state offices were able to process – not including claims that have been filed but haven’t been processed yet.

Under the sudden explosion of unemployment claims a month ago, state unemployment offices fell far behind in processing the claims, amid reports of crashed websites, unanswered phones, and eternal hold-times. Since then, the unemployment offices have ramped up staffing, expanded hours of their call centers, and boosted the capacity of their servers to where they can better handle the tsunami of people trying to file claims online. And they’re gradually catching up.

Nevertheless, new layoffs are constantly being announced. And the implementations of the provisions in the stimulus package to expand unemployment insurance to contract workers, the self-employed, and gig workers are just now being rolled out state by state, and will mostly fall into future initial claims data.

The 12 states with the most initial claims this week.

Florida is finally making some progress in catching up in processing claims. In the report a week ago, Florida had processed only 181,000 claims. But in the current reporting week, it was able to process 505,137 claims, just behind California.

The table below shows the 12 states that had the most initial claims for unemployment insurance in the week ended April 18:

States’ comments on sectors with increases in layoffs.

Five of the six states where unemployment claims increased from the prior week by more than 1,000 provided comments about the industries that layoffs were concentrated in. Still absent in the special mentions are the industries of finance and insurance – the biggest industry in the US – and jobs directly related to technology. Many of these jobs have switched to work-from-home:

But many states reported “fewer layoffs.”

This week, 42 states reported declines of more than 1,000 initial claims compared to a week ago. Last week, only six states had reported declines. In California, the number of claims that were processed per week had topped out at over 1 million. Last week, it dropped to 660,000; this week, it dropped to 533,568. In the comments, some of these states listed the industries that had “fewer layoffs” than in the prior week. These industries include:

A person who has filed an “initial claim” for Unemployment Insurance (UI) and still doesn’t have a job a week later is added to “insured unemployment.” The number of the “insured unemployed” – often called “continued claims” – skyrocketed to 15.98 million, by far the highest in the history of the data series. The high before this Covid-19 era was 6.63 million in May of 2009. 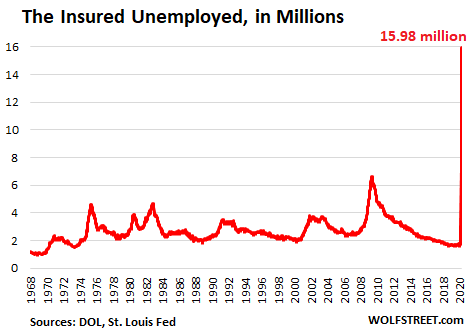 This was week five of the collapse of the labor market. Layoffs are still happening in large numbers. In addition, contract workers, self-employed, and gig workers will show up in larger numbers in the UI claims going forward. So the gut-wrenching tally will continue to balloon for a few weeks.

Home sales are shaping up to be a lot weaker in some places than in others in the Covid-19 era. Here are the 20 cities with the largest drops. Read…  Housing Market under COVID-19: Regular Folks Retreat, Foreign Investors Blocked, Large US Investors Gone, iBuyers Frozen