“Only good news is that the number was still positive despite the high number of cancellations.”

Orders for heavy trucks in March collapsed by 52% from the already dreadfully low levels a year ago to 7,400 trucks, the lowest since 2010, driven by cancellations of existing orders “due to the sharp and sudden downturn in economic conditions,” according to preliminary estimates by FTR Transportation Intelligence. And so COVID-19 spirals through the economy: 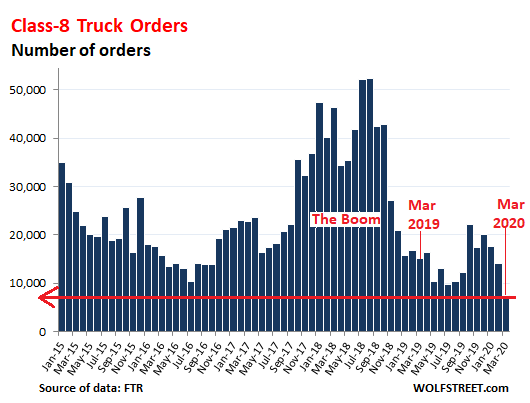 “It is expected that most fleets will pause their replacement cycles due to the crisis,” said FTR vice president commercial vehicles Don Ake. “Large fleets that have immediate needs and the financial resources will continue to place modest orders. Additionally, smaller fleets may tap into the used truck market for their short-term needs to reduce the financial risk.”

“The second quarter will be tough on the Class 8 market, and the third quarter is still highly uncertain,” Ake said.

“The only good news here is that the number was still positive despite the high number of expected cancellations,” Ake said.

But the plunge in truck orders started 17 months ago, in late 2018, following a historic boom. This chart shows the change in orders in percentage terms, compared to the same month a year earlier. As you can see, COVID-19 hit just as fleets had started to increase their orders a tiny wee bit: 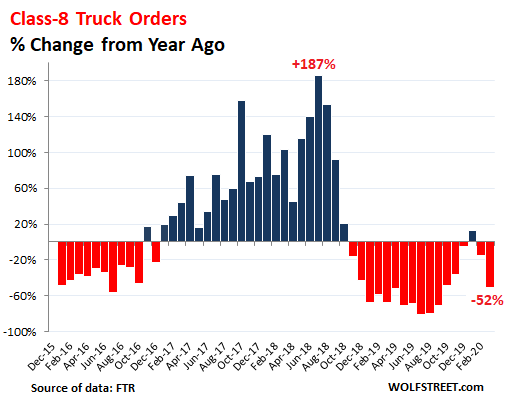 The historic boom in orders from late 2017 through the summer of 2018 was triggered as fleets responded to extraordinary demand for transportation services caused by companies wanting to front-run potential tariffs. By late 2018, the whole shebang came unglued, and fleets slashed their orders. Now comes COVID-19.

So that was the scenario through February. In March, truck manufacturers suspended production due to the virus.

There is a long lag between “orders” to the manufacturer and when the manufacturer actually sells the truck to the dealer for inventory or to the fleet that had ordered it. When backlogs are huge, as they were in 2018, the lag between orders or sales can be very long; now that these backlogs have been eaten up, the lag is rather short.

So “sales” were high through much of 2019, fed by the order backlog from 2018. But late last year, sales got hit too. And in March, they plunged.

The chart shows the weakness from October through February, followed by the lockdown-plunge in March. The plunge in March was likely just the initial reaction of the data to the lockdowns that started in mid-March: 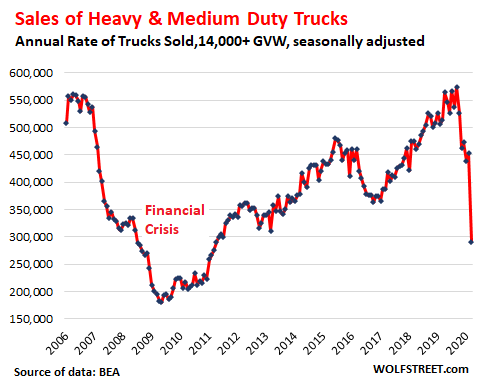 Ironically, trucking has now split in two. The fleets that serve the supermarket supply chains are struggling to catch up with demand of widespread panic buying and hoarding. Supermarket chains have reported booming sales in March. And those products got there by truck. And trucks that serve the fulfillment infrastructure of ecommerce are busy, trying to catch up with online panic buying and a massive shift from brick-and-mortar retail of all kinds (now largely shut down) to online. And there may be other pockets with a lot of demand for trucking services.

As for the rest, demand for transportation services has withered. Fleets are trying to navigate this new environment. And preserving cash by culling and cancelling orders is one of the first steps to take.

This is how the Fed is loading up on Treasury securities, mortgage-backed securities, repos, “central bank liquidity swaps,” and “loans” to keep the Everything Bubble from imploding further. Read...  $1.5 Trillion Helicopter Money for Wall Street in 3 Weeks of Fed Bailouts

81 comments for “Trucking Skids Off the Road Entirely”