Loading up on Treasury securities, mortgage-backed securities, repos, “central bank liquidity swaps,” and “loans” to keep the Everything Bubble from imploding further.

This doesn’t yet include about $200 billion in MBS that the Fed bought over the past three weeks but whose trades have not yet settled (the Fed will book them later when they settle). With those MBS included, the Fed now holds over $6 trillion in assets. Since the Fed started this whole shebang of Wall Street bailout programs three weeks ago, total assets have exploded by $1.5 trillion: 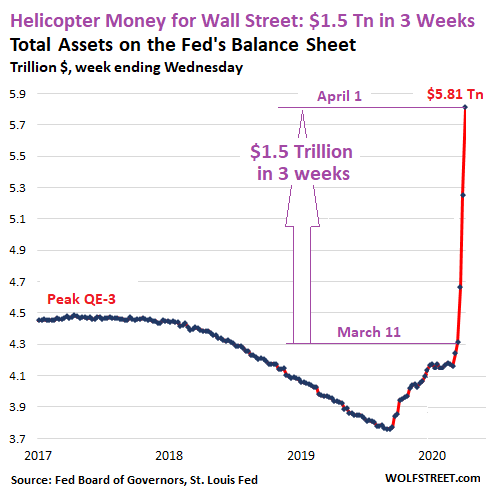 During the week of the balance sheet, the Fed added $362 billion in Treasury securities, spread over all types and maturities, except T-bills, which have remained flat since March 11, after soaring at a rate of $60 billion a month starting in October.

The Fed is now adding exclusively Treasuries with longer maturities. The total balance of Treasuries soared to $3.34 Trillion. 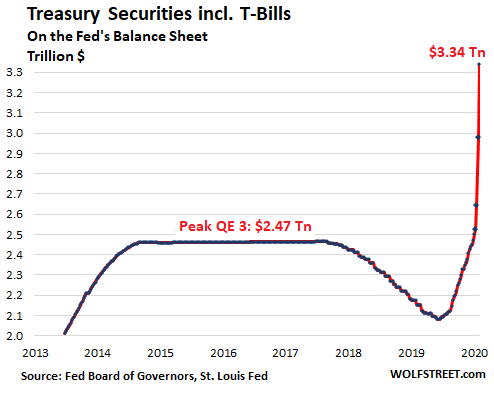 Repos go from sizzle to fizzle.

The Fed is now offering a gazillion dollars in repos every day – $1 trillion per day in overnight repos plus over $1 trillion a week in term repos – but there are essentially no more takers. Over the past few days, repos accepted ranged between $0 and $5 billion.

There are no more overnight repos on the Fed’s balance sheet because no one wants them anymore. What’s left are term repos from prior periods, and when they mature, that repo account will likely drop to zero, as it had done during Financial Crisis 1, when the Fed started QE. For this week, repo balances dropped to $263 billion, down 40% from three weeks ago: 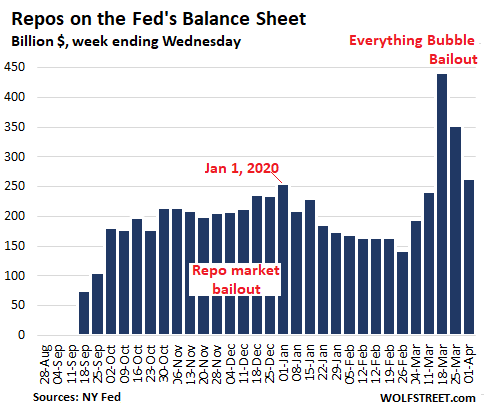 As part of its whole bailout shebang, the Fed expanded its standing “dollar swap lines” with major central banks and opened new swap lines with a gaggle of other central banks, such as the Bank of Mexico. This was the second week after these lines had gone live, and they exploded.

Their purpose is to supply dollars to foreign governments and foreign companies that have borrowed in dollars – which they don’t control and cannot inflate away, a huge gamble – so that they can now service their dollar debt and don’t need to default. It’s a foreign-gambler bailout.

The Fed carries these swaps on its balance sheet priced in dollars at the exchange rate set in the agreement. And these swaps exploded from almost zero two weeks ago to $349 billion currently. The chart is on the same scale as the repo chart above: 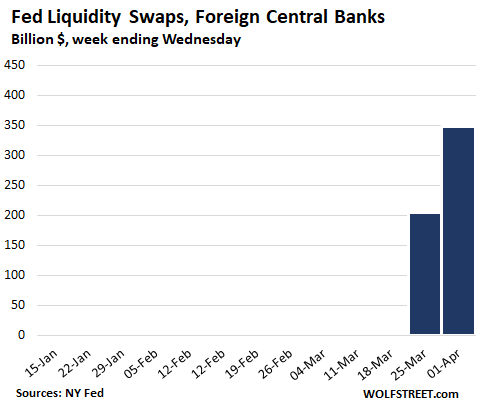 “Loans” is a group of asset accounts on the Fed’s balance sheet that had been essentially asleep since Financial Crisis 1. But over the past three weeks, they jumped from near-zero to $129 billion. This is what the Fed has lent out as part of its new bailout liquidity programs and direct lending programs, by category:

The chart is on the same scale as the charts for swaps and repos above, giving these loans room to grow into as Wall Street gets more of its helicopter money: 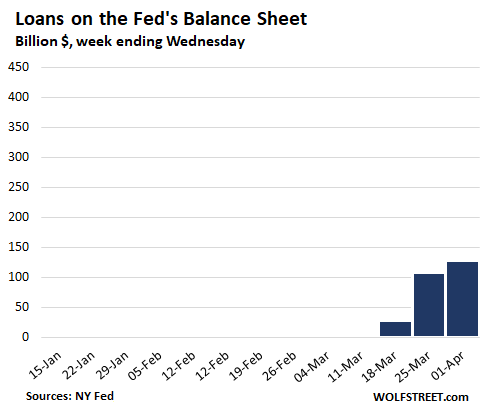 Over the past three weeks, since this whole bailout shebang has commenced, the Fed disclosed $319 billion in gross purchases of MBS. This MBS market was blowing up, mortgage REITS with leveraged bets on MBS were blowing up, and the Fed stepped in to bail everyone out. But MBS trades take a while to settle, and the Fed books them only after they settled. This week, we’re seeing the first leg of those $319 billion MBS purchases. The total balance of MBS rose by $73 billion during the week to $1.46 trillion: 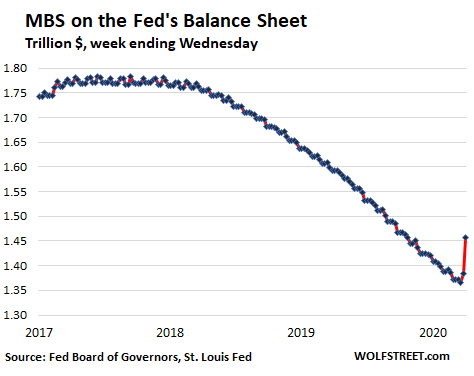 Since the beginning of this bailout shebang three weeks ago, the Fed created $1.5 trillion and handed it to Wall Street either as loans or to purchase financial instruments. If the Fed had sent that $1.5 Trillion to the 130 million households in the US, each household would have received $11,538. But no. That $1.5 trillion was helicopter money for Wall Street.

The Fed is propping up nearly every asset class directly or indirectly, to make sure that investors, from stockholders of overleveraged airlines to highly leveraged speculators in Commercial Mortgage-Backed Securities, don’t get their faces ripped off after having run up the Fed’s handiwork, the greatest Everything Bubble there ever was.

“Nobody has any taste for risk anymore. All of those exotic loan programs have ceased. All investors buying that paper are gone”: mortgage broker. Read... Week Two: How COVID-19 Lockdowns Impact US Housing Market. Mortgages Give Clues: It Gets Uglier

216 comments for “$1.5 Trillion Helicopter Money for Wall Street in 3 Weeks of Fed Bailouts”