Latest data is out. Folks who hoped the Renminbi would break the dollar hegemony have to be very patient.

The US economy and financial system – including being able to maintain and fund the gargantuan trade deficits and fiscal deficits – has become reliant on the dollar being the dominant global reserve currency. And the IMF just released its next installment on how this status has been changing. 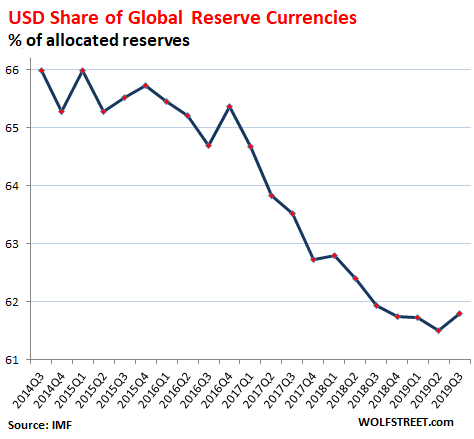 This data does not include the Fed’s holdings of dollar-denominated assets, such as its pile of Treasuries or MBS, though it includes the Fed’s holdings of assets denominated in foreign currencies ($20.6 billion) — minuscule compared to its $4.16 trillion in total assets, and minuscule compared to China’s stash of foreign exchange reserves of $3.1 trillion. The data also does not include the assets other central banks hold in their domestic currency.

The US dollar’s share of total global reserve currencies declines when central banks other than the Fed proportionately reduce their dollar-denominated assets and add assets denominated in other foreign currencies. 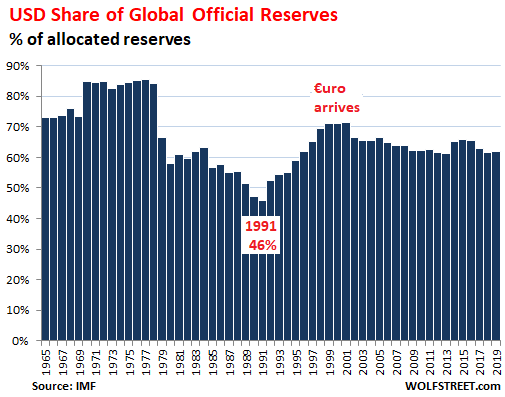 Euro fails to reach “parity” with the dollar.

The creation of the euro came with a lot of hopeful rhetoric that it would reach parity with the US dollar in every way, including as global trade currency, global financing currency, and global reserve currency. The euro has been replacing in phases the national currencies of EU member states, starting with five currencies, including the Deutsche mark, a major reserve currency at the time, but far below the dollar. During the initial phase of the conversion of European currencies to the euro, the euro’s share of global reserve currencies rose and the dollar’s share fell from 71.5% in 2001 to 66.5% in 2002.

Now, the Eurozone, with its 19 member states, would be the largest economy in the world if it were counted as a country. And it was assumed by euro boosters that given the size of the Eurozone, its currency would reach parity with the dollar and end the dollar hegemony. These hopes were trashed by the sovereign debt crisis in the Eurozone, and the euro’s share has since been hovering in the range of 19% to 21%. In the third quarter, the euro’s share of global foreign exchange reserves ticked down to 20.1%.

Where is the Chinese renminbi?

In October 2016, the IMF included the Chinese renminbi in the currency basket of the Special Drawing Rights (SDR), and the renminbi became officially a global reserve currency. But since then, progress of the currency has been exceedingly slow, and there are no signs the RMB would dethrone the US dollar anytime soon. But it has surpassed the Swiss franc, the Australian dollar, and the Canadian dollar, as its share in the third quarter grew to 2.0% (short red line near the very bottom): 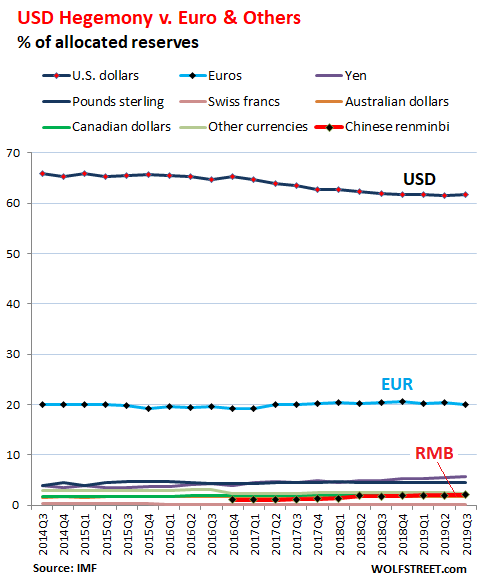 To see what is going on beneath the dollar-euro battle, it’s useful to look at the currencies without the dollar and the euro. The chart below shows that the yen’s share, having surged to 5.6%, has pulled away from the other currencies, including the RMB; and that the pound sterling’s share, despite the Brexit turmoil, has held roughly steady. The share of “other currencies” plunged when the RMB was pulled out of that category in 2016. Since that time, the RMB has increased its share from 1% to 2%, surpassing the Australian dollar in 2018 and the Canadian dollar in 2019: 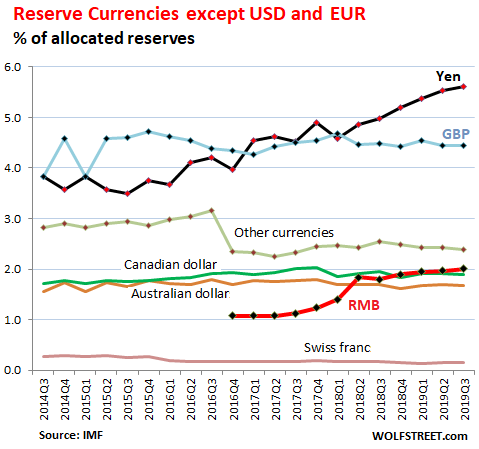 This data is based on data that central banks submit to the IMF. The IMF does not disclose the detailed holdings by individual central banks. It only discloses it in aggregate, as you see here. But not all central banks participate in disclosing to the IMF how their foreign exchange reserves are “allocated” by currency. But participation has been rising. In 2014, 59% of the foreign exchange reserves were “allocated” to specific currencies. By Q3 2019, allocated reserves reached nearly 94% of total reserves.

The relationship between trade deficits and reserve currency status.

But there is a relationship: The US dollar’s status as the largest reserve currency and the largest international funding currency permits the US to easily fund its trade and fiscal deficits. This enabled policies by the US government, by governments of other countries, and actions by Corporate America that have led to the gargantuan dual deficits.

111 comments for “Status of US Dollar as Global Reserve Currency v. Euro, Yen, Chinese Renminbi, & Others”