But on Jan 1, it removed $64 billion in liquidity via gigantic “Reverse Repo.” And it continues to shed MBS.

The big fear was that the repo market would blow out again at the end of 2019, as banks would be window-dressing their balance sheets by building up reserves to certain levels. In the process, they would refuse to lend to the repo market. And borrowing pressure on the other side – such as hedge funds or mortgage REITs that borrow cheaply in the repo market to fund long-term bets – would drive up repo rates. At the end of 2018, repo rates blew out, but quickly settled down without the Fed’s involvement. In September 2019, repo rates blew out again. At this point, the rattled Fed started dousing the market with hundreds of billions of dollars to calm the repo market and prevent another year-end blowout.

To do this, the Fed engaged in repo operations and also began purchasing short-term Treasury bills. This calmed the repo market, and at the end of December, repo rates didn’t blow out. But on January 1, the Fed did a huge $64 billion reverse repo, the opposite of a repo, thus draining overnight $64 billion in liquidity from the market. This astounding spike in reverse repo balances showed up on its balance sheet for the week ended January 1, released today: 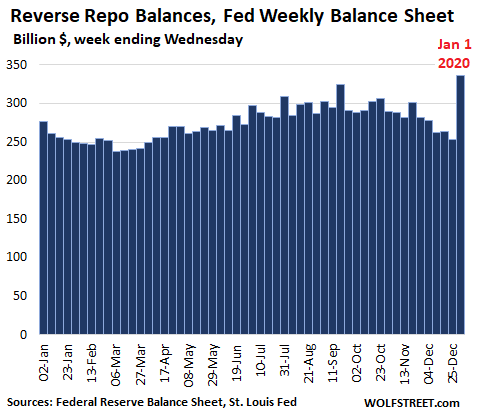 In a normal repo, the Fed buys Treasury securities and mortgage-backed securities (MBS) guaranteed by Fannie Mae and Freddie Mac, or Ginnie Mae, under agreements to repurchase them at a fixed price on a specific date, such as the next day or in a longer period. This adds liquidity to the market for the duration of the repo. When the repo matures and unwinds, the liquidity gets drained. But a new repo can roll this over. Repos are assets on the Fed’s balance sheet.

Total repos on the Fed’s balance sheet on January 1 rose to $256 billion, up $48 billion from a month earlier (as of Dec 4 balance sheet): 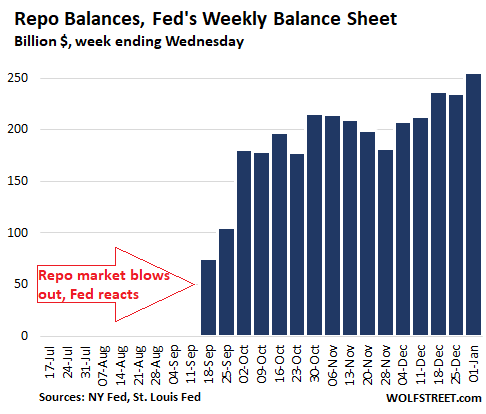 During the month of December through the balance sheet for the period ended January 1, the total amount of Treasury securities on the Fed’s balance sheet jumped by $69 billion.

Most of this increase was due to the Fed’s buying spree of short-term Treasury bills (T-Bills) with maturities of one year or less. The Fed carried $169 billion of T-bills on January 1, up from nearly nothing in September, following its announcement that it would add about $65 billion in T-bills a month until there were enough reserves in the banking system to calm its crybaby cronies in the repo market. This brought the balance of total Treasury securities, including T-bills, to $2.33 trillion. 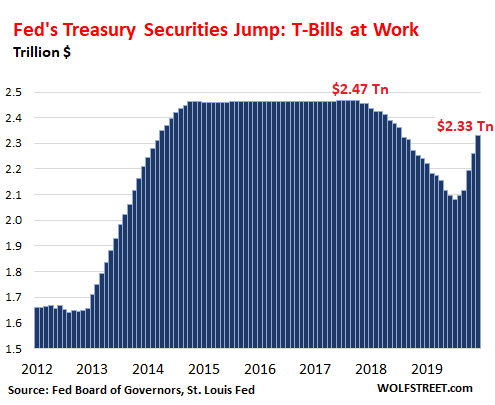 But the Fed continues to shed MBS

In numerous pronouncements in 2019, the Fed said that it wants to get rid of its holdings of MBS. The plan is progressing bit by bit. In December, the Fed shed $15 billion in MBS. Over the past eight months, it has shed $174 billion in MBS, or about $21.8 billion a month on average. Its holdings are now down to $1.41 trillion, below where they had first been in November 2013: 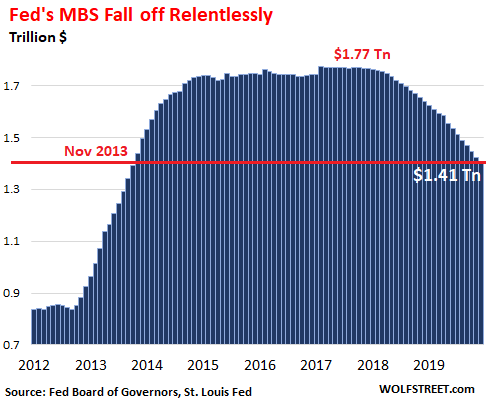 In total, the assets on the Fed’s balance sheet – which include Treasury securities, repos, and MBS, among other stuff – jumped by $108 billion in December to $4.17 trillion. Over the four months since the repo-market bailout started, the Fed has added $412 billion to its balance sheet, the fastest increase since early 2009, when the banking system was on the verge of collapse and the economy in a tailspin. But this time there was no crisis, other than a hissy-fit of the Fed’s crybaby-cronies in the repo market, and they had to be pacified, it seems: 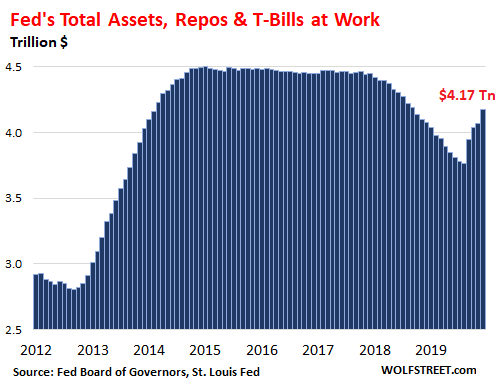 We got another one from the Fed, warning about all the right things. And then they do the opposite. Read… Here’s What Gets Me about the Fed’s Warnings of “Excesses and Imbalances that Are Hard to Deal with Later”