“The ultimate economic cost of the COVID-19 outbreak cannot be accurately estimated until we get more clarity on the duration and scale of the pandemic.”

In developed economies, the services sector – finance, insurance, health care, professional services such as technology, lawyering, or architects, and many others, including transportation, travel, tourism, restaurants, bars, clubs, etc. – account for 60% to 70% of the economy. What we’re now seeing is a sudden fall-off-the-cliff collapse in the services sector in addition to a dizzying downturn in manufacturing. We got the first glimpse today, from the Eurozone where COVID-19 lockdowns were imposed well ahead of those in the US. And the data for the Eurozone released today picked up the effects.

The IHS Markit Services PMI for the Eurozone, which tracks how executives of unnamed companies see various aspects of business at their own company, collapsed in a totally unprecedented manner. In these Purchasing Managers Indices, 50 is the no-growth line; above 50 means expansion; below 50 means contraction. The lower the number below fifty, the faster the decline. The services PMI for March performed a gut-wrenching off-the-cliff plunge from moderate growth in February (52.6), past the low point during the Financial Crisis (39.2), to a horridly low 26.4: 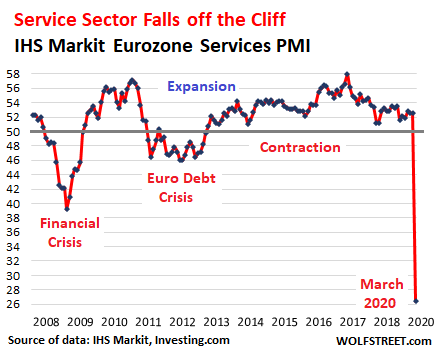 This plunge in activity was “wide-reaching across the Eurozone,” the report said. Germany, France, Italy, and Spain – the four largest economies in the Eurozone – all experienced sharp declines, with the sharpest declines hitting Italy and Spain.

Incoming work fell at a record pace in the data series, after five years of growth, with Italy and Spain getting hit the hardest.

Some other horrid standouts:

The lockdowns and travel bans essentially shut down travel services (such as airlines), accommodation services (hotels, resorts, vacation rentals, etc.), tours, cruises, conferences, and all the other services that business travelers, conference goers, and tourists spend money on.

The Services PMI for Italy, which got hit first and the hardest by the COVID-19 crisis, and imposed lockdowns before other countries did, collapsed to 17.4. And this, the report said, “likely gives a taste of things to come for other countries as closures and lockdowns become more prevalent and more strictly enforced in coming months.”

And the report adds that “the ultimate economic cost of the COVID-19 outbreak cannot be accurately estimated until we get more clarity on the duration and scale of the pandemic.”

Manufacturing is in deep trouble too, but…

In the Eurozone, manufacturing has been weak and contracting for 14 months, unlike services. But in recent months, the PMI re-approached the expansion line, when the lockdowns hit. The scene is clouded, however, by the way the PMIs are structured (more on that in a moment). The IHS Markit Eurozone Manufacturing PMI, released two days ago, fell to 44.5 (below 50 = contraction), and as bad as it seems, it was still a higher reading than the bottom of the Euro Debt crisis and far higher than the bottom of the Financial Crisis: 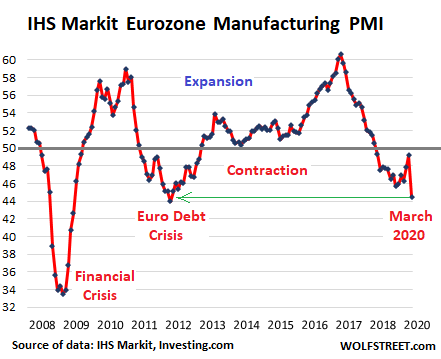 But this time around, the “near-record delays are an indication of global supply chains being decimated by factory closures around the world,” the report pointed out. And this quirk just “masks the severity of the slump in manufacturing.”

“We need to look at the survey’s output and new orders gauges to get a better understanding of the scale of the likely hit to the economy that will come from the manufacturing sector’s collapse, and these indices hint at production falling at the sharpest rate since 2009, dropping an annualized rate approaching double digits.”

The Netherlands was the only country with a PMI in growth mode, if barely (50.5), while the other countries saw acute declines. Greece – which had benefited from the strongest growth in the Eurozone in recent months – and Italy were at the bottom:

“The concern is that we are still some way off peak decline for manufacturing. Besides the hit to output from many factories simply closing their doors, the coming weeks will likely see both business and consumer spending on goods decline markedly as measures to contain the coronavirus result in dramatically reduced orders at those factories still operating.

“Company closures, lockdowns and rising unemployment are likely to have an unprecedented impact on expenditure around the world, crushing demand for a wide array of products. Exceptions will be food manufacturing and pharmaceuticals, but elsewhere large swathes of manufacturing could see downturns of the likes not seen before.”

Similar patterns are now spreading across the US and other parts of the world, where lockdowns started later. They will show up in the data as we go forward. There are now all kinds of estimates circulating about the decline of the economy as measured by GDP, with similar fall-off-the-cliff effects, depending on how long this situation lasts and how slowly the lockdowns will loosen and how quickly or slowly the economy wobbles back to life. But one thing is now getting increasingly clear, there won’t be a sudden go-back-to-normal moment.

This type of sudden, previously unimaginable fall-off-the-cliff data about the lockdown-economy is gut-wrenching. Read… Week Two of the Collapse of the Labor Market