It’s not the drop that worries me, it’s the historic neck-breaking volatility.

It started out ugly Sunday night and ended uglier today. Sunday evening, stock futures plunged 5%, hit limit down, and trading was halted. Futures remained pinned at limit down without further trading. When stocks started trading in the morning during regular hours, the S&P 500 Index opened at 2,490, down -8.1%. This was below the limit down rule during regular hours where trading should stop for 15 minutes if the index drops 7%. But it had blown through this limit-down from the first moment.

Trading was halted at the point. When trading resumed 15 minutes later, the S&P 500 index instantly fell to 2,412 (-11%) before it started moving higher. But the partial recovery, if you can call it that, only lasted about one-and-a-half hours, before stocks gave up their ghost, and the S&P 500 index broke through the 2,400 level, closing the day at 2,386 after a nasty drop-off at the end of the day. The index ended the day down 12%, the biggest ugliest one-day drop since Black Monday in October 1987: 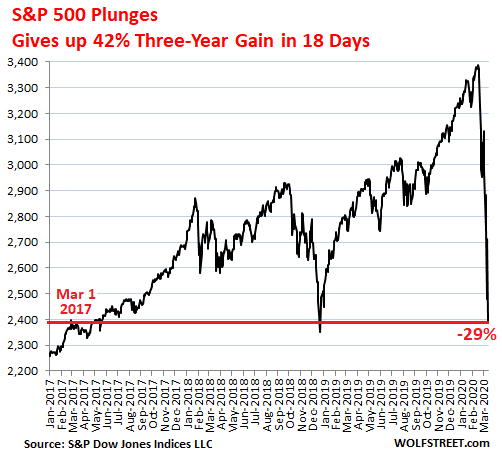 It’s not the drop that worries me, it’s the historic nerve-rattling Volatility.

What’s so concerning is not the 29% drop of the S&P 500; drops of this kind are sort of routine and part of larger crashes that recur every decade or so since the 1980s. The last two times, it led to sell-offs of over 50%. So that’s to be expected.

What’s concerning me – and what makes this such a dreadful harbinger – is the record-breaking, neck-breaking, nerve-rattling, immensely messy and chaotic volatility, the huge down-days followed periodically by a huge up-day, and the numbers are just gigantic and historic and mind-boggling, and they’re getting bigger.

Every one of the past six trading days was a move up or down between around 5% and 12%, including two moves over 9% followed by a 12% move back-to-back. This has never happened before: 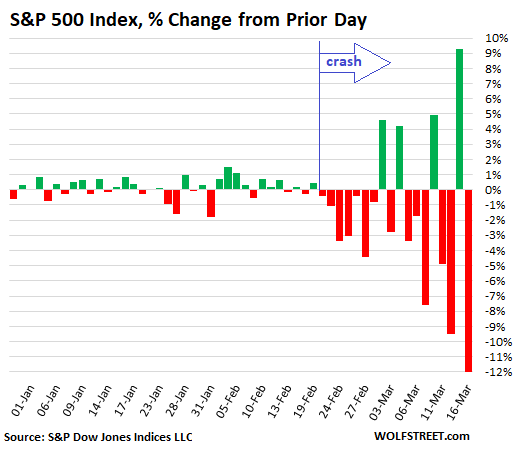 Volatility is typical of crashes. During the Financial Crisis crash, the S&P 500 jumped by the double digits a couple of days as well. But these moves weren’t back-to-back like this. During the financial crisis, there was no single period of four days in a row of 2% or higher moves. Now we had six days of around 5% to 12% moves.

This worst drop since 1987 Black Monday occurred after the Fed’s emergency teleconference meeting on Sunday afternoon, when it decided to roll out another shock-and-awe program, after the shock-and-awe program it rolled out last Thursday. It cut rates to near 0% and threw $700 billion in QE on top of it, along with a series of other measures, along with over $1 trillion a week in repo cash.

This shows how record-scared the Fed is that its Everything Bubble that it so assiduously inflated over the past decade is coming unglued in just a matter of days.

Here is Fed Chair Jerome Powell’s reaction, upon seeing the 12% plunge in the stock market today, as envisioned by cartoonist Marco Ricolli, exclusively for WOLF STREET, because, folks, you gotta keep your sense of humor in these trying and crazy times:

Dow component Boeing is in collapse mode. It is responsible for driving the DOW down faster than the broader S&P 500 Index. Boeing shares [BA] plunged 23.8% today, and are apparently willfully ignoring the dictum beautifully imprinted on our WOLF STREET beer mugs that “Nothing Goes to Heck in a Straight Line,” having plunged 63% over the past 18 trading days, and are back where they’d been in November 2013: 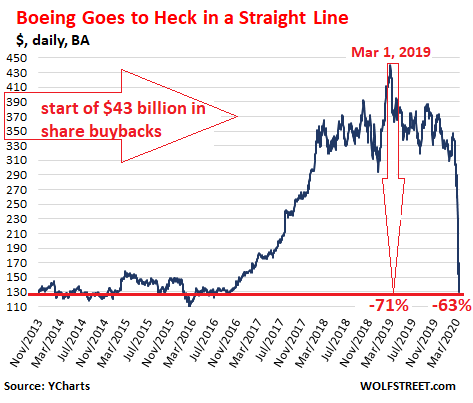 But don’t cry for Boeing shareholders: Boeing blew, wasted, and incinerated $43 billion on buying back its own shares to “unlock shareholder value” and “return value to shareholders,” or whatever Wall Street BS-nomenclature might have been used, starting in 2013, which is when the above chart begins. So you can see the effect of share buybacks, and what happened afterwards. And now, in its effort to survive this crisis, Boeing could use every penny of that $43 billion wasted on share buybacks. But it’s gone.

In terms of the economic data, this is just the beginning. There will be more of the same and worse. Read… First US Economic Data of the COVID-19 Era Emerges. It’s Ugly