This is just the beginning. There will be more of the same and worse.

Nearly all economic data as reported on a monthly or quarterly basis have so far reflected the era in the US before the economy reacted to the coronavirus. These reactions – from panic-buying of toilet paper to airlines shutting down much of their international and now even domestic routes – were phased into the economy beginning in later February and have now risen to a crescendo. But they’re slow in making their way into the economic data.

We get company by company warnings, and we get the government’s and the Fed’s reaction to the events, but we haven’t seen the impact in the official data yet. The first data to seriously reflect this are the surveys of company executives such as the Purchasing Manager’s Indices for March, out later this month, or the New York Fed’s Empire State Manufacturing index, which was released this morning,

And it’s ugly: The Empire State Manufacturing index of General Business Conditions plunged by 34.4 points, the largest point-drop on record, from a still relatively sanguine level of 12.9 in February, to the level in March of negative -21.5, the lowest since 2009, and right at where it had been in October 2008, following the Lehman bankruptcy in September. And this was just the first reaction related to the impact of Covid-19 mitigation measures: 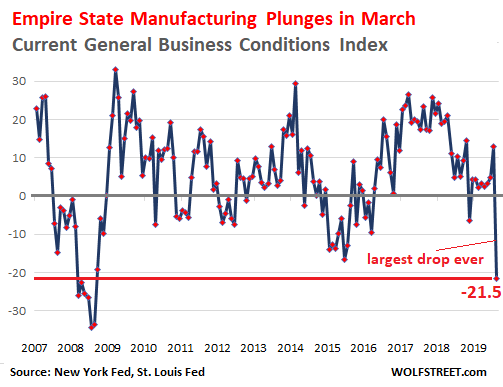 Manufacturing had already been weak all last year and earlier this year, before the coronavirus was even an issue in the US. But now the measures aimed at slowing the spread of the virus are hitting it. Some highlights among the sub-indices:

“Optimism about future activity wanes,” the report said about how companies see general business conditions over the next six months. And the index about these future business conditions plunged by 21.7 points to +1.2, the lowest level since the depth of the Financial Crisis in January and February 2009: 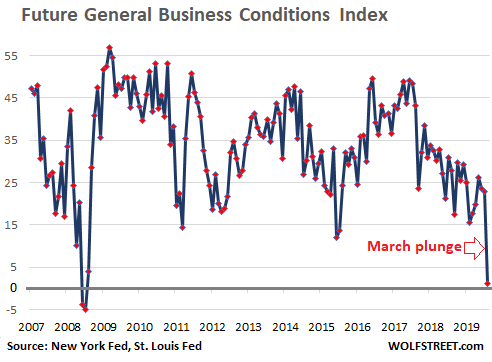 This was the first indicator of what the US economy is currently going through – namely a partial shutdown of economic activity – in response to efforts aimed at slowing the spread of the corona virus. Similar plunges, and likely some even worse plunges, in the data will crop up over the next few weeks and months as the impact of the Covid-19 measures percolates to the surface in the data.

Holy moly, what a mess. But here is our hilarious cartoon of Jerome Powell tearing out his hair. Gotta keep you sense of humor. Read…  Panicked Fed Slashes Rates to Near 0%, Throws $700 Billion QE on Top, after $1.5 Trillion Shock-and-Awe Repos Fizzled. Stock Futures Plunge 5%, Hit Limit Down

156 comments for “First US Economic Data of the COVID-19 Era Emerges. It’s Ugly”