Shares, which at peak-hype spiked 1,200% in a month, go to zero. Board of Directors goes to zero. Executives go to zero. Sales already zero.

Investors have been eager to plow vast sums of money into companies that offer products and services at an investor-subsidized price, the so-called cash-burn machines. They elbow into all kinds of markets and “disrupt” things. They include Uber and Lyft, WeWork, electric-scooter-rental outfits, such as Lime and Bird Rides, but also big and mature companies with thousands of employees and billions of dollars in sales, such as Netflix and Tesla, or the entire shale-oil-and-gas sector. Bedding retailer Casper is now heading for an IPO, at a price that will give its prior investors a big haircut, with the goal of getting retail investors involved in its cash-burn strategy.

But when investors get tired of funding these types of consumer subsidies, and refuse to provide more fuel to burn, than the music stops. This fate has now been finalized at the parent company of MoviePass – Helios & Matheson Analytics Inc. It said today in an SEC filing that it and its subsidiaries MoviePass and Zone Technologies each filed for Chapter 7 bankruptcy.

Everything has gone to zero, even the top executives (interim CEO and interim CFO) and the members of the Board of Directors, who all resigned, according to the filing, and there is no one left to run the place, and there is no place left to run. It will be up to the court to pick through the debris:

As a result of filing the Petition, a Chapter 7 trustee will be appointed by the Bankruptcy Court to administer the estate of the Company and to perform the duties set forth in Section 704 of the Code.

The stock [HMNY] fell 80% today from nearly nothing (fractions of a cent) to zero. Starting in August 2018, the shares went through a series of horrendous reverse stock splits to keep them dropping below $1 and to keep them from being delisted from the Nasdaq as they plunged. In February 2019, they were delisted anyway and have since traded over-the-counter.

In terms of the current number of share (following all the reverse stock splits), shares had spiked to $8,350 intraday on October 11, 2017 on all the MoviePass hype and how it would disrupt the movie theater business and the world in general. The scam artists on Wall Street got the stock to perform a miracle. Shares gained 1,200% in one month, from September 13 to October 11, 2017. But after peak-hype, shares collapsed: 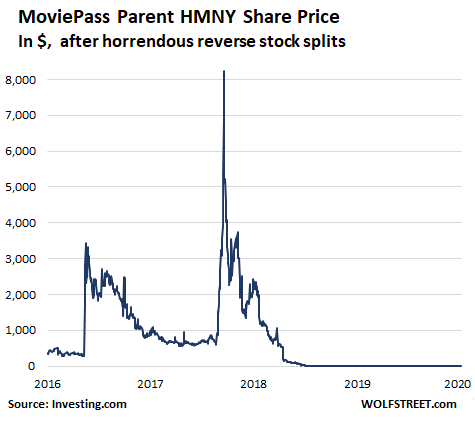 At the time MoviePass offered a deal where for a fixed monthly fee of $9.95, subscribers could see a movie a day at any theater. Folks could gorge on movies, and MoviePass had to pay the theater the actual retail price of the ticket. In many cities, a single movie ticket cost a lot more then the subscription, and subscribers could see a dozen or more per month for $9.95.

It was one heck of a deal for movie-loving subscribers, funded by investors, as the company burned through cash at a blistering rate.

In the first half of 2018, the company was burning about $45 million a month subsidizing movie tickets. It then raised the subscription price to $14.95 and limited the number of movies people could see, and it said it would make money selling user data, but everyone already had this user data, and it was essentially worthless.

MoviePass wasn’t any different from other businesses whose business model calls for selling goods or services below the cost of doing so, and that constantly need new funds from investors to keep going.

The theory is that this cash-burn strategy gives them a competitive advantage over other businesses in that industry that have to make money and cannot therefore cut prices this far. With enough investor money to subsidize these companies, they can disrupt existing industries or create new niches.

But when investors get tired of throwing money at a cash-burn machine, the funds run out, and the fuel runs out, and the machine shuts down.

Another money-losing, cash-burning, over-hyped unicorn in a ho-hum low-tech business (bedding retailer) tries to make it out the IPO window. Read… Startup Unicorn Casper Sets IPO Price Range to Dish Out 36% Loss to Prior Investors

94 comments for “What Happens When Investors Stop Fueling Cash-Burn Machines: At MoviePass Parent, Everything Goes to Zero”