The week after the year-end Repo Chaos didn’t happen.

The feared chaos in the repo market over the year-end period didn’t materialize as the Fed had flooded the market with cash via repo operations and purchases of T-bills (Treasury securities with maturities of one year or less). This kept repo rates glued to the bottom of the Fed’s target range for the federal funds rate at just over 1.5%. But it sure took a big flood of liquidity to douse that potential chaos – $410 billion between September and January 1 – and now some of that liquidity got drained.

As of the evening of January 8, the Fed had drained $45 billion in liquidity from the repo market, according to the Fed’s weekly balance sheet released this afternoon, bringing the total repo balance down from $256 billion on January 1, to $211 billion on January 8. This was by far the biggest weekly drop in total repo balances since September. It knocked repo balances down below where they’d first been at the end of October: 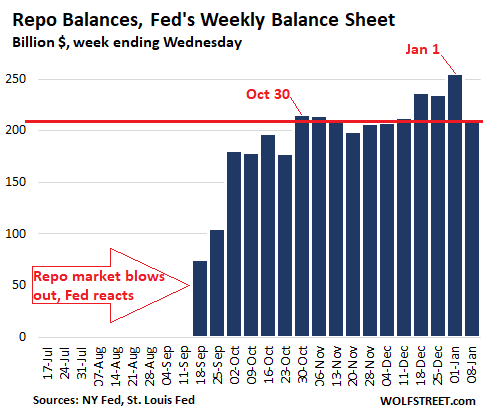 From September 2019, when the repo market blew out, through January 1, the Fed engaged in a series of repo market interventions. Under these repurchase agreements, the Fed buys securities (mostly Treasuries) with a commitment to sell them back on a set date and at a set price. The repo takes securities off the counterparties’ hands and puts cash into their hands, which adds liquidity to the market. At maturity, the repo unwinds, the transaction reverses, and that liquidity is drained from the market. Overnight repos unwind the next day. Term repos unwind, for example, in 7 days or 14 days. This repo activity is a constant in-and-out.

So, on net, the Fed had doused the money market as of January 1 with about $410 billion in liquidity. With its repo operations between January 1 through January 8, it mopped up $45 billion of this liquidity.

But wait… the Fed mopped up liquidity with one hand via the repo market; but with the other hand, it doused its crybaby cronies on Wall Street with more liquidity by purchasing T-bills: over the past 7 days, it increased its holdings of Treasury securities by $19 billion: 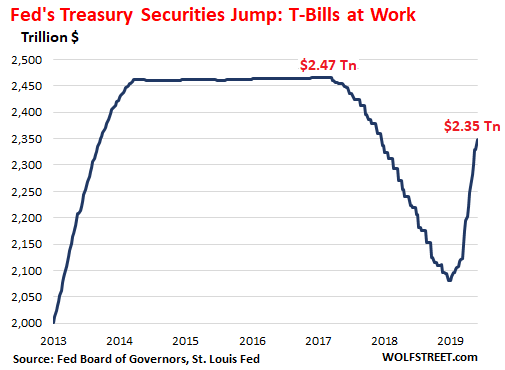 Over the past seven days, there has been no change in the Fed’s MBS account. This will come later in the month.

And the Fed’s total assets on its balance sheet as of the evening of January 8, given the $45 billion drop in repos and the $19 billion increase in Treasury Securities, fell by $24 billion.

This decline is so minuscule that you have to put it under a microscope to see it among $4.15 trillion in assets on the balance sheet, but it’s the biggest week-to-week decline since July 2019, when the Fed was still engaged in Quantitative Tightening: 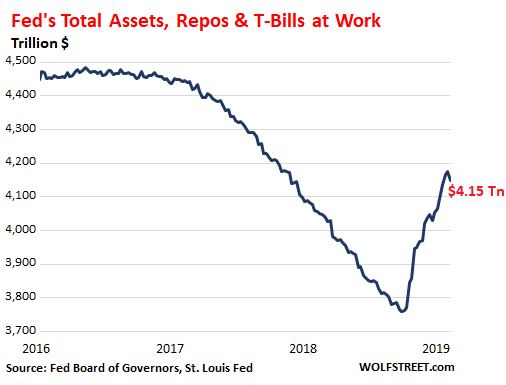 Obviously, there is no telling what the Fed will do if something changes. But as of now, various Fed heads have fanned out across the land to pat each other publicly on the back about how well the repo crisis has been resolved – meaning that the Fed feels like it has this now under control and that it can back off with its efforts.

It wouldn’t surprise me if the Fed continues to gingerly drain liquidity out of the money market as it backs away from repo activities and slows down its T-bill purchases as per its announcement that it would do so when excess reserves reach some “ample” level of magic, even as the Fed continues to roll off its MBS at a rate of $20 billion a month.

Something funny’s happening in NIRP land: long-term yields are rising, negative yields are turning positive, and investors are getting punished for having handed their brains to central banks. Read... How Much Money Have Folks Already Lost Who Bought that Negative-Yielding 30-Year German Government Bond last August?

78 comments for “Fed Drains $45 Billion from Repo Market, back to Oct Level. T-Bill Purchases Continue. Assets Shrink by Most Since QT”