Something funny’s happening in NIRP land: long-term yields are rising, negative yields are turning positive, and investors are getting punished for having handed their brains to central banks.

So how much can you lose in a little over four months buying one of the most conservative investments, the German government 30-year bond, during peak-hype of the negative-interest-rate era?

At peak-hype of the negative-interest-rate era, in mid-August 2019, the German government was able to squeak by selling €869 million of 30-year bonds (ISIN DE0001102481) that it had the temerity offer with a 0% coupon, meaning no interest payments ever, and that it was able to sell above face value, giving the bond a negative yield of -0.11% at issuance.

So, as yields fall – become more negative – bond prices rise. That’s the bet for buyers of these things. And this is what happened for a few days in August. The bond started trading up, going over 107 cents on the euro at the peak, giving it a negative yield of around -0.20%.

But as yields rise – become less negative or become more positive – prices fall. And this is what happened next. At the end of August, this bond traded at 105.62 cents on the euro, giving it a negative yield of -0.18%. So far so good.

Then a funny thing happened in NIRP land, as well as the US: Despite ECB and Fed rate cuts, long-term yields began to zigzag higher, and bond prices fell.

So, if you bought this bond in August last year, say, at 106 cents on the euro, and you hold it to maturity, you will receive zero interest income over those 30 years; and then in August 2050, the German government will redeem it by paying you face value, namely 100 cents on the euro. You will book a 6% capital loss and zero interest income for 30 years.

But today, we won’t think about inflation. We’ll just focus on the capital loss so far.

This bond’s yield is now positive +0.32%. In other words, on this bond, the yield rose a still minuscule 50 basis points, and this translates into a 14.5% capital loss. This is when duration meets negative yields that are ticking up in tiny baby steps into the positive (chart via Börse Berlin): 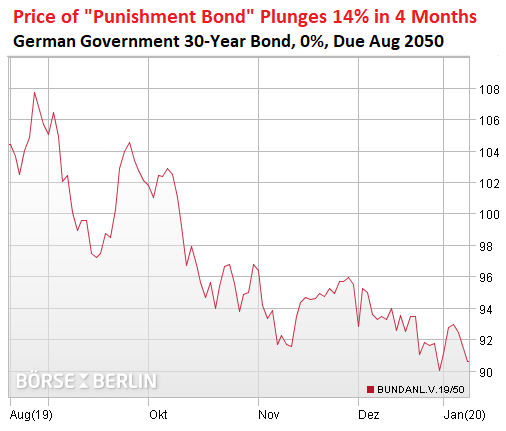 With positive-yielding bonds, when they’re headed south, holding them to maturity means that you get at least some interest income to help you defray the scourge of inflation. With negative-yielding bonds, it’s a guaranteed loss unless yields go even more negative, say, over the long term, to a negative -100%. And that’s unlikely to happen. That’s why I call these long-duration negative yielding bonds the ultimate “punishment bonds.” They punish you for having surrendered your brain to the central bank.

Every German government bond with a remaining maturity of over 13 years has left NIRP land. There are still plenty German bonds around with negative yields, but medium and longer-term yields are rising as well, with the 10-year yield now at negative -0.216%, up 50 basis points from negative -0.712% on August 28.

And this is happening around the NIRP world:

But it was fun while it lasted – the idea that you could eventually earn a regular income stream by taking out the biggest possible 30-year mortgage with a negative interest rate, or that you could pile up student loans to the max whose negative interest rates would pay for your early retirement! Just imagine the possibilities! So we watch with sadness in our hearts as this era of impossible possibilities is fading.

Folks who hoped the Renminbi would break the dollar hegemony have to be very patient. Read… Status of US Dollar as Global Reserve Currency v. Euro, Yen, Chinese Renminbi, & Others

105 comments for “How Much Money Have Folks Already Lost Who Bought that Negative-Yielding 30-Year German Government Bond last August?”