The Fed opened the vault in September. But others bought too.

The US Gross National Debt has jumped by $1.28 trillion as of today, compared to 12 months ago, to $23.04 trillion. And these are the good times. The economy is rocking and rolling, we’re told. How will this debt balloon during the next economic downturn? Yes, that was a rhetorical question. It’s better to not even think about it. And no one is thinking about it: 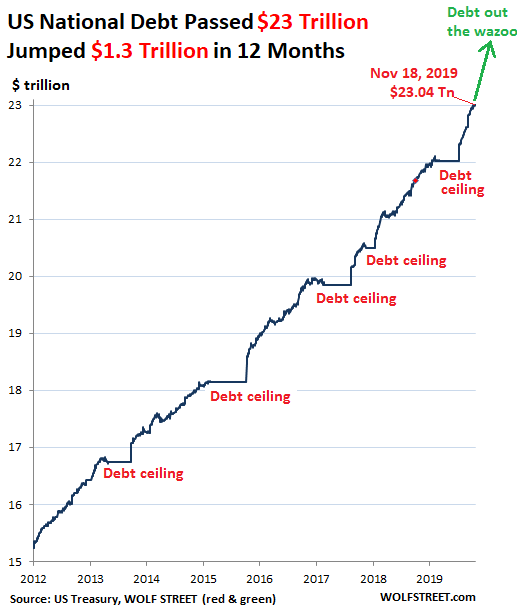 But who the heck is buying all this debt?

Every dollar of this debt exists in form of Treasury securities that someone must have bought and must own. In terms of foreign holders, we got some answers in the Treasury Department’s TIC data today, which shows how much of this debt was held, bought, or dumped by foreign investors through the end of September. And we can glue the other pieces together from the Fed’s balance sheet and from the Treasury Department’s disclosures.

Foreign holders dumped in September but are way ahead year-over-year.

All foreign investors combined – “foreign official” holders such as central banks and foreign private-sector investors of all stripes – dumped $84 billion in US Treasury securities in September. But compared to September 2018, their holdings were up by a massive $551 billion.

In the prior month, August, foreign holders had set a record with $6.86 trillion in Treasuries! September was just tick-down from that record and remains the second highest ever.

The chart below shows the holdings at the end of each quarter, in trillion dollars (blue line, left scale) and as a percentage share of total US debt (red line, right scale). In dollar terms, Q3 spiked to a new record. But their percentage share continued the uneven decline that started in 2015, to 29.8% of total US debt, as foreign investors are loading up on US government debt, but at a slower rate than the rate by which the debt increases:

Japan, which had become the largest US creditor once again in June, bypassing China, shed $29 billion of its Treasury holdings in September, but its holdings still surged by $118 billion over the past 12 months, to $1.15 trillion, which remains below the peak in 2014 of $1.24 trillion.

China has kept its Treasury holdings roughly flat over the past two months, at $1.10 trillion, but has shed $49 billion over the past 12 months:

The relative importance of Japan and China as creditors to the US has been declining gradually for years, as the US debt has ballooned. Their combined share has dropped to 9.9% of the total US debt:

The top 10 Also-Rans among Foreign Creditors of the US

Far behind Japan and China are the next 10 major holders, most of them associated with financial centers of some sort such as London and Belgium (home to Euroclear, which handles large amounts in fiduciary accounts) and tax havens for corporate or individual entities.

Mexico and Germany, with which the US runs the second and third largest goods trade deficits after China, are not on the top 10-behind-China-and-Japan list; They’re in 22nd and 20th positions – being a big net exporter to the US doesn’t mean that Treasuries need to pile up in the country (in parenthesis, Treasury holdings in September 2018):

Who else is there? The US holders…

US government entities bought $173 billion in Treasury securities over the 12 months, bringing their total holdings to $5.9 trillion by the end of September. These Treasury securities (“debt held internally”) are held by the Social Security Trust Fund and government pension funds and belong to the beneficiaries of those funds.

Other US entities – American banks, institutions, and individuals – bought the remaining $503 billion of Treasuries over the past 12 months, bringing their total holdings to $7.74 trillion, or 34.1% of the total US debt.

This includes the “primary dealers,” the broker-dealers with which the Treasury Department does business. They ballooned their holdings over the 12 months by 70%, or by $79 billion, to $190 billion.

And it includes banks that are not among these primary dealers, bond funds, pension funds, hedge funds, businesses with cash balances that they don’t want to keep in a bank, private equity firms and distressed-debt funds keeping their powder dry until opportunities arise, and individual investors via their accounts at Treasurydirect.gov or at their broker. In short, American institutions and individuals held 34.1% of the huge and ballooning pile of US gross national debt: 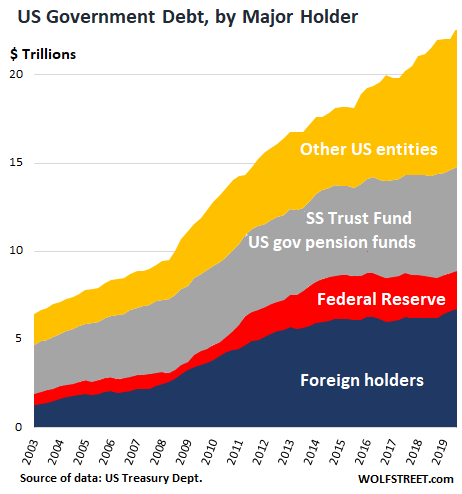 It was the fastest increase in the Fed’s assets for any two-month period since the post-Lehman freak show in late 2008 and early 2009. Read… Fed Goes Nuts with Repos & T-Bills but Sheds Mortgage Backed Securities

90 comments for “US National Debt Spiked by $1.3 Trillion in 12 Months, to $23 Tn. But Who Bought This Pile of Treasury Securities?”