Tender Offer Didn’t Happen. Bonds Plunge to Record Low. This comes after WeWork reported a $1.25 billion loss in Q3. Second thoughts about throwing so many good billions after bad?

You’d think that by throwing billions of dollars at it, SoftBank would somehow manage to clean up this fiasco and make WeWork disappear from the headlines for a day or two, but no.

After WeWork’s IPO dream collapsed, and with the cash-burn machine operating so efficiently that it would run out of cash and face bankruptcy this year, SoftBank stepped in with a $9.5 billion bailout – a heroic effort to bail out its own prior $10 billion investment in the company by throwing good money after bad. In the process, WeWork’s valuation plunged from $47 billion to $8 billion, as decided by SoftBank.

The bailout included a $5 billion loan facility, a $1.5 billion cash investment, and a $3 billion tender offer to buy out some early investors and shareholders. This tender offer should have happened by November 6, but hasn’t happened yet, it was revealed today.

According to a letter sent to WeWork shareholders and obtained by The Real Deal, SoftBank was supposed to launch the tender offer “within five business days of the completion” of the $1.5 billion investment. WeWork made this $1.5 billion payment on October 30. So the deadline for commencing the tender offer would have been November 6.

But no tender offer was made, sources told The Real Deal:

A person close to SoftBank said the tender “is going to happen soon,” but would not provide a timeframe.

“It’s just taking a little more time than expected due to the time needed to get all the technicalities in order,” the individual said, without providing specifics.

These “technicalities” could be tricky. The Real Deal said that “the completion of the tender of is contingent on ‘the receipt of required regulatory approvals’ and the absence of litigation, bankruptcy proceedings and defaults on any debt owed, according to the letter.”

This comes a day after WeWork had reported to its debt holders a record quarterly loss of $1.25 billion for the third quarter. This loss exceeded its revenues of $934 million. 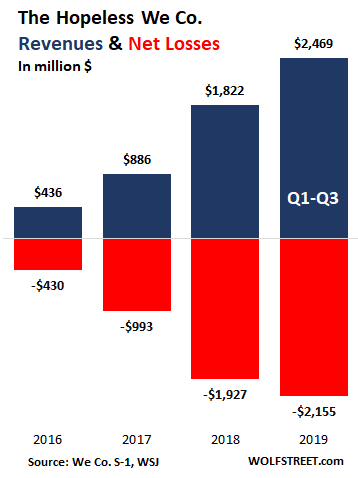 A double-whammy for its bonds, whereupon they hit a new record low. WeWork’s $702 million unsecured 7.875% bonds, issued in April last year and due in May 2025 – its only publicly traded securities – dropped to 74.44 cents on the dollar, down 29% from 105 in mid-August before the death spiral began. At the current price, these bonds yield 14.9%, assuming the coupon payments will be made and that the bond will be paid off — which clearly the bond holders have more and more doubts about: 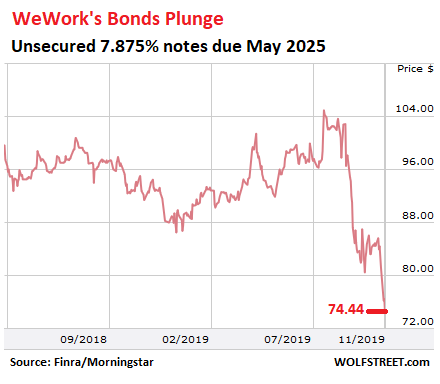 Fitch rates the company CCC+ with Negative Outlook, which is in deep junk and considered “substantial risk.” Standard & Poor’s rate it one step higher, B-. Moody’s withdrew its credit rating of WeWork last year because it had “insufficient or otherwise inadequate information to support maintenance of the ratings,” and was done with it (my cheat sheet for the credit rating categories by Moody’s, S&P, and Fitch).

The original bet that investors took by buying these bonds was that WeWork’s IPO would raise so much money that it could easily keep burning cash and keep raising more cash to burn as its stock price would continue to soar and allow rich follow-on offerings so that it would have no trouble making coupon payments and eventually paying off the bonds at maturity, while continuing to burn cash.

Instead, they got the saga of the WeWork fiasco. And the prospect of those easy billions to be raised in an IPO and a series of follow-on offerings has now been replaced with the prospect of having to deal with SoftBank, which has its own problems, including massive WeWork-related losses at SoftBank and at its Vision Fund, and very nervous Saudi investors breathing down its neck.

It is ironic the Fed puts out this data, as if to show off its success, and how every time the wealth of the 1% is threatened, the Fed comes up with new bailouts, rate cuts, and other shenanigans. Read… How the Fed Boosts the 1%: Even the Upper Middle Class Loses Share of Household Wealth to the 1%. Bottom Half Gets Screwed

90 comments for “Is SoftBank’s Bailout of WeWork Already in Trouble?”