Of the total shares outstanding of the SPDR S&P 500 ETF, only 2.6% were out on loan to short sellers this week, the lowest since early October 2018, and down from 7% during the summer, according to IHS Markit data cited by Bloomberg. Meaning that short-sellers who want to short the entire market, and not specific companies, are worried that the market will break out, powered by a Brexit deal or a miraculous US-China trade deal as per presidential tweet, or whatever, and rip their faces off if they’re short the market.

There are many forms of shorting the stock market. Short interest in the SPDR S&P 500 ETF serves as sentiment indicator about short bets more generally.

When short-sellers are not interested in shorting the market because they fear a potentially ruinous rally – that is a sign of stock-market optimism.

The last time short interest in the SPDR S&P 500 ETF was this low was in early October 2018, just when everyone was preparing for lift-off and the Santa rally and what not, and short-sellers didn’t want to be caught on the wrong side of the trade. But instead, all heck broke loose.

It turned into the worst October anyone could remember, and a near-20% sell-off of the S&P 500 Index by Christmas.

Short sellers borrow shares to sell them high, hoping for prices to drop so that they can buy them back later at a lower price, return them to their owners, and pocket the profit. They have to buy back those shares at market price in order to close the trade. When short interest is very high, this means that short-sellers who want to take profits after shares have plunged end up buying shares massively as shares are plunging, and they put a floor under the market.

But when there is little short interest, because short sellers are afraid that shares could surge and rip their faces off, that floor does not exist. And this is what happened last October. The market started dropping on little short-interest, and short-sellers weren’t around to buy back their shares to take profits.

Instead, short-sellers piled into the market to short the falling market as the month went on, and continued to do so through December before short-interest began to decline in early 2019.

Conversely, when short interest is low, as it is now, there isn’t going to be much support from short-sellers when shares do rise. Shorts would lose money on a rising market, and they have to buy shares to get out from under their trades, and this can trigger very sharp short-covering rallies. But with short-interest low, this isn’t going to happen on a large scale.

But it’s not that simple. Short-sellers are speculators that take big asymmetrical risks. There is another class of speculators, but they fear a sell-off and they’re deleveraging:

In September, margin debt – the amount individuals and institutions borrow from their brokers against their portfolios to increase leverage – fell by $9 billion from August to $556 billion, according to FINRA today, after having already dropped $37 billion in August, which puts the margin-debt level back where it had been at the end of December 2018, after the historic plunge in margin debt during the October-December stock-market rout. 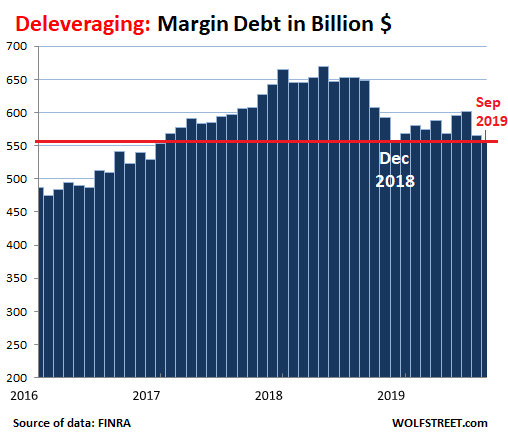 Over the long term, the patterns emerge. Obviously, with a chart spanning decades, such as the chart below, the absolute dollar amounts are less relevant since the purchasing power of the dollar has dropped over the period. What is important are the movements, and how they relate to stock market events, which I indicated in white.

Margin debt is now back where it had first been in April 2015: 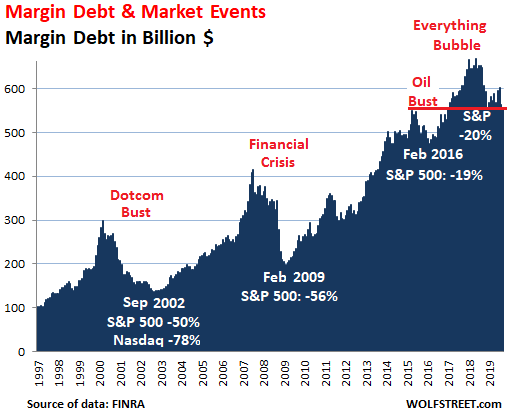 There are many forms of stock market leverage, but margin debt is the only form that is reported on a monthly basis. So it serves as a sentiment indicator of stock-market leverage.

This leaves us with conflicted sentiments in the market:

In this market that has been coddled for so long, and where fundamental considerations have long gone out the window because they’ve become irrelevant, maybe it’s the fear of the next surprise that can go in either direction, whether it’s a tweet or a Chinese announcement or something spreading from a tangled-up repo market, or whatever.

But even “fear” may not be the right word because the CBOE Volatility Index (VIX) is bouncing along at very low levels, below 14 at the moment, where “complacency” rules, and almost as low as early October last year, just before all heck broke loose.

“Does that mean that we have bad markets? Read…  ”Why Banks Didn’t Lend to the Repo Market When Rates Blew Out: JPMorgan CEO Dimon