Ironically, house prices dropped the most in Silicon Valley.

In the nine-county San Francisco Bay Area, house prices – as measured by the median price where half of the houses sold for more and half sold for less – dropped 5.4% in September compared to September last year, to $880,000, according to the final data by the California Association of Realtors (C.A.R.) released today. It was the eighth month in a row of year-over-year declines. The median price in September was down 16.2% from the peak in May 2018 and has now fallen below April 2017.

The 12-month moving average (red line in the chart below), by definition, lags behind but shows longer-term trends more clearly. After double-digit year-over-year gains in 2018, the 12-month moving average began to taper in early 2019, approached zero growth in June and July, turned negative on a year-over-year basis in August (-0.8%) for the first time since July 2012 when the Bay Area was emerging from Housing Bust 1, and fell 2.3% in September compared to September last year: 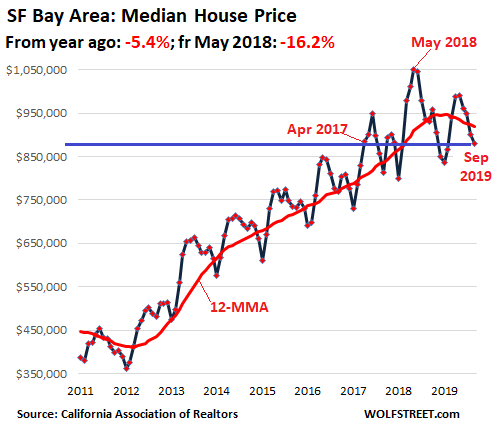 In California overall, the market has split: Single family house prices are still rising: The median price at $605,680 in September, was up 4.7% from September last year; but condo prices have been falling for months, with the median price down 2.1% year-over-year.

But the state-wide median prices were dragged down by the San Francisco Bay Area. In all other major regions, median prices of single-family houses (SFH) and condos rose in September compared to a year ago. The Bay Area sticks out like sore thumb:

So here we go county by county for the San Francisco Bay Area.

The Bay Area is vast: Nine counties spread around a series of bays, of which the “San Francisco Bay” is only one. There are only a handful of bridges across the bays. In addition, there are mountains. “Commutes can be hellish” is an understatement. The more arduous the commute to San Francisco and Silicon Valley, the less ludicrously expensive the housing market.

In San Mateo County, the northern part of Silicon Valley, the median house price in September fell 8.1% year-over-year, to $1.47 million. This is down 16.9% from the peak in April 2018 and just below where it had first been in April 2017.

The 12-month moving average (12-MMA) of the median house price fell in September on a year-over-year basis for the first time since June 2012, after double-digit year-over-year gains through November last year: 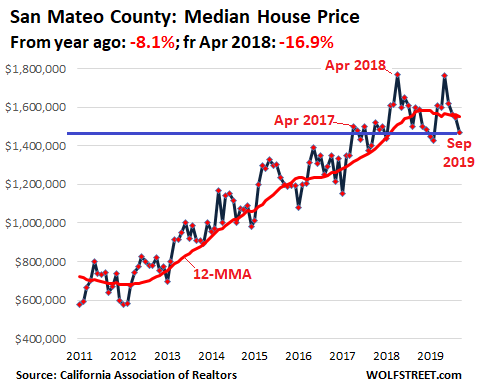 In Santa Clara County, the southern part of Silicon Valley and the most populous county in the Bay Area, the median house price dropped 2.0% year-over-year, to $1.22 million, which is down 15.8% from the peak in April 2018 and just below where it had first been in October 2017.

The 12-MMA dropped 5.6% year-over-year, the fifth month in a row of ever larger year-over-year declines. The county includes San Jose, and ranges from Palo Alto in the north to Gilroy in the south. In mid-2018, the 12-MMA had still surged at rates of over 20%: 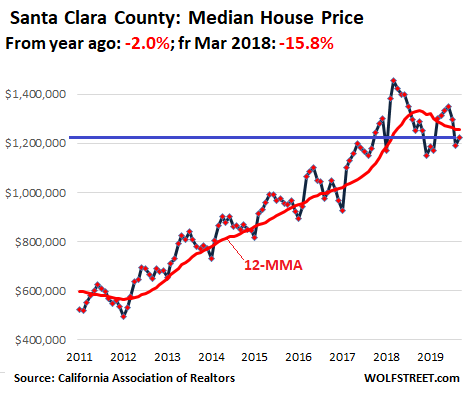 In San Francisco, the median house price has been extremely volatile over the past two years, even by San Francisco standards, dropping in January to $1.376 million and then spiking 28% in six months to $1.76 million in June. And now it’s in the process of giving up those gains again. In September, the median house price fell to $1.54 million, down 12.6% from June, but still up 2.2% from a year ago, though it’s below where it had been in October two years ago. So yes, whiplash. The 12-MMA dipped into the negative for the first time since June 2012: 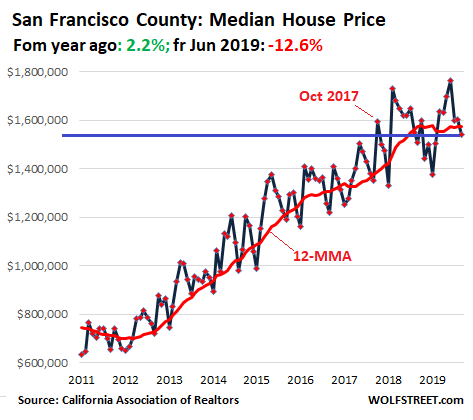 The thing is, house prices were supposed to explode in Silicon Valley and San Francisco, ignited by the lowest mortgage rates in about three years and by the hordes of IPO millionaires from Uber, Lyft, and all the other companies that would all of a sudden get house-hunting fever, though they’ve been millionaires for years, and had access to this money long before the IPO.  This time-honored real-estate hype about IPO millionaires was proven wrong during the last two tech-bubble peaks. Those episodes were both followed by housing busts. And a similar scenario is starting to build up on the horizon. 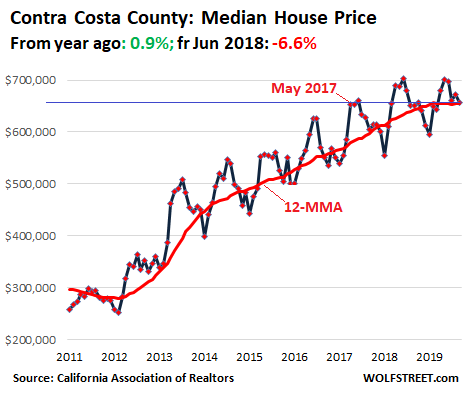 In Alameda County, where Oakland and Berkeley are, the median house price has also been exceptionally volatile over the past two years. In September, it was up 1.1% from a year ago, but was down 11.2% from the peak in May 2018 and is back where it had first been in June 2017. The 12-MMA fell for the third month in a row (-1.8%), something not seen since mid-2012: 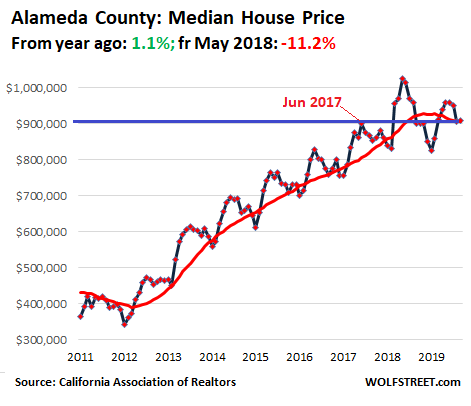 In Sonoma County, which forms part of Wine Country, something funny happened in August: The median price suddenly spiked out of nowhere, and folks thought the boom was back, but in September that spike collapsed back into nowhere. This left the median price flat year-over-year and down 7.0% from the peak in June 2018 and back where it had first been in November 2017. The 12-MMA fell 3.3% from a year ago, its sixth month in a row of year-over-year declines: 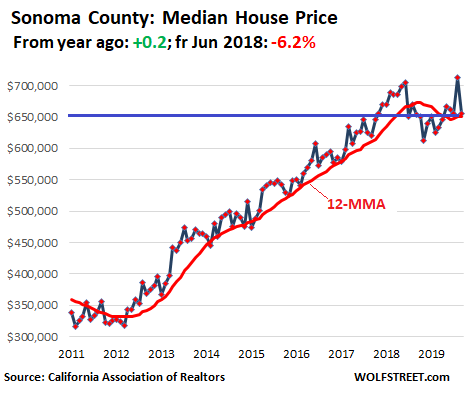 In Napa County, the median house price in September did what it had done in Sonoma County in August: It spiked hugely, up 12.6% in just one month, which left it up 14.9% from a year ago, and it will certainly get unwound over the next few months: 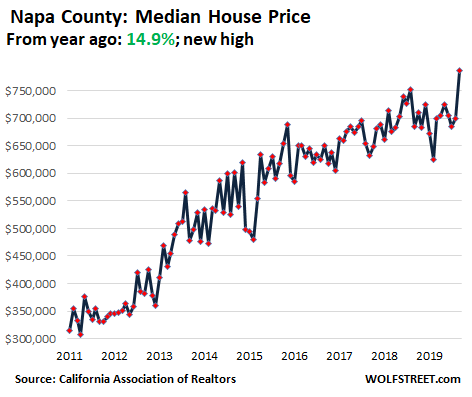 Marin County, connected to San Francisco via the Golden Gate Bridge and ferry service, is among the most expensive places in the Bay Area. It has not been spared the house price declines. The median house price fell 2.5% in September from a year ago, to $1.36 million and is down 6.2% from the peak in October 2018: 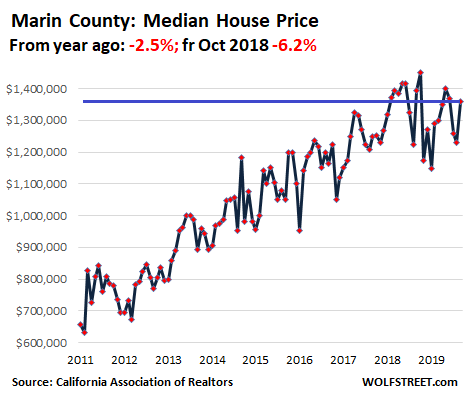 Solano County, extending east and north from the city of Vallejo – which filed for bankruptcy in 2008 – is the least expensive county in the Bay Area. The median home price at $455,000, is about flat with May 2018 and is up only about 1.5% since July 2017, despite the dip and rise in between: 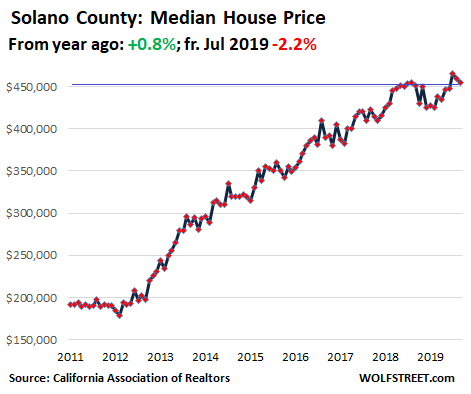