Housing market dynamics are local. Just how much they differ from market to market is depicted by the 20-city CoreLogic Case-Shiller Home Price Index. I divide these 20 markets into two parts: The Most Splendid Housing Bubbles in America, where home prices have more than doubled since January 2000, and in some cases nearly tripled; and the remaining markets where prices have not yet doubled since January 2000, including markets that had been totally crushed and, while up in percentage terms, remain relatively low.

In the Chicago metro, prices of single-family houses rose 0.4% in July from June, and were up 1.6% from July last year, according to the CoreLogic Case-Shiller Home Price Index for Chicago which is comprised of the counties of Cook (includes the City of Chicago), DeKalb, Du Page, Grundy, Kane, Kendal, McHenry, and Will. The index remained down 13% from the crazy peak during Housing Bubble 1: 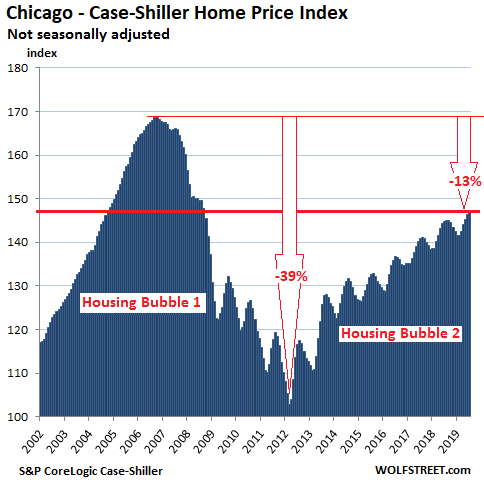 The Case-Shiller Index was set at 100 for January 2000. Chicago’s peak index value of 169 during Housing Bubble 1 indicates that house prices had risen 69% between January 2000 and September 2006.

Condo prices in the Chicago metro declined a tad in July from June, after having been flat in the prior month. This further whittled down the year-over-year gain to just 0.7%: 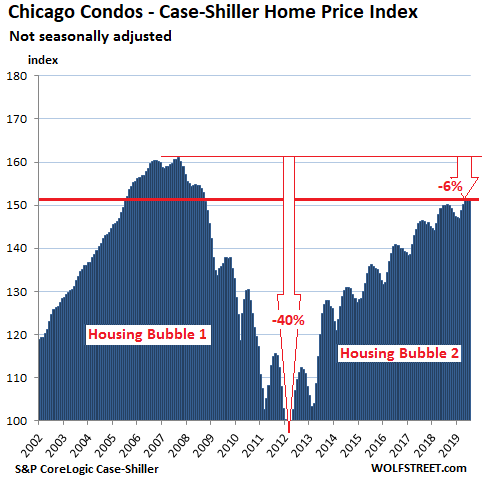 The charts here are on the same scale, with the vertical axis going from 100 to 180. This makes price moves easier to compare from market to market. The exceptions are Dallas and Detroit: Dallas because the house price boom since 2012 has overshot 180 by a wide margin; and Detroit because the plunge during Housing Bust 1, from already low levels, has pushed the index far below 100. 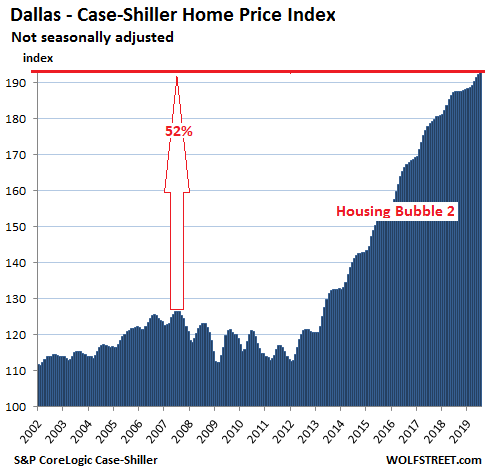 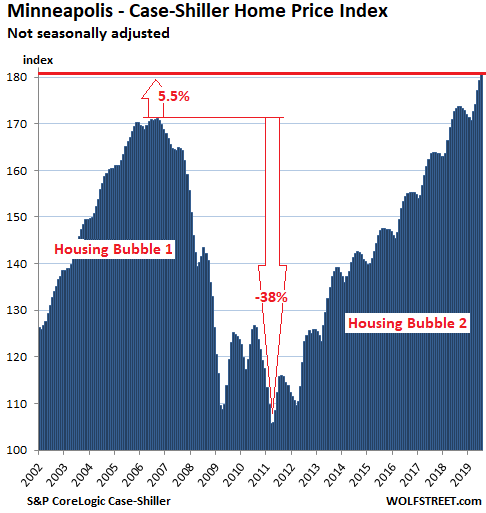 In the Charlotte metro, house prices rose 0.3% in July from June and were up 4.6% year-over-year, continuing a relentless price boom that started in early 2012: 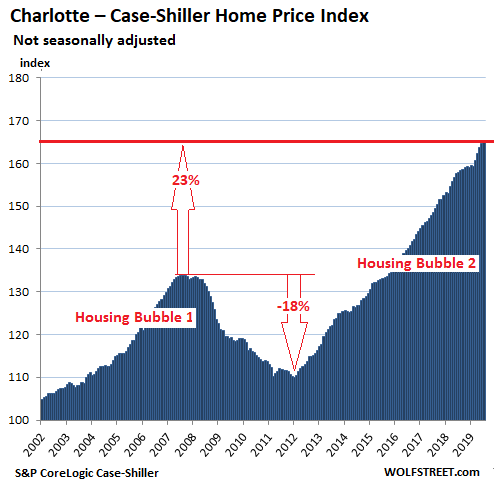 House prices in the Atlanta metro barely budged in July (+0.09%) compared to June. This reduced the year-over-year gain to 4.0%. While still a large, it was the smallest such gain since September 2012, when Atlanta emerged from Housing Bust 1.

In the Atlanta metro house prices plunged 40% during Housing Bust 1, with the Case-Shiller index hitting a value of 82.5 by early 2012, a value first seen in 1996. Note the larger amount of white space compared to the above charts, which are on the same scale (except Dallas): 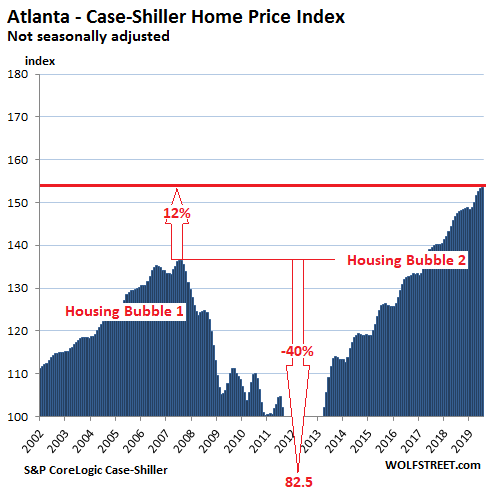 House prices in the Detroit metro ticked up 0.2% in July from June and are up 4.1% year-over-year, hitting an all-time record for the third month in a row, now 1.7% above the old high set in December 2005. The Detroit metro is comprised of the counties of Lapeer, Livingston, Macomb, Oakland, Saint Clair, and Wayne (includes the City of Detroit).

During Housing Bust 1, this housing market collapsed from already low-ish levels to levels first seen in 1992, which included a total collapse of the housing market in the City of Detroit. To show how far prices plunged, and to what extent they have soared since then, I have extended the scale to where it starts at 60 instead of 100 (value in January 2000), marked by the shaded area. The index has doubled in less than eight years since hitting bottom: 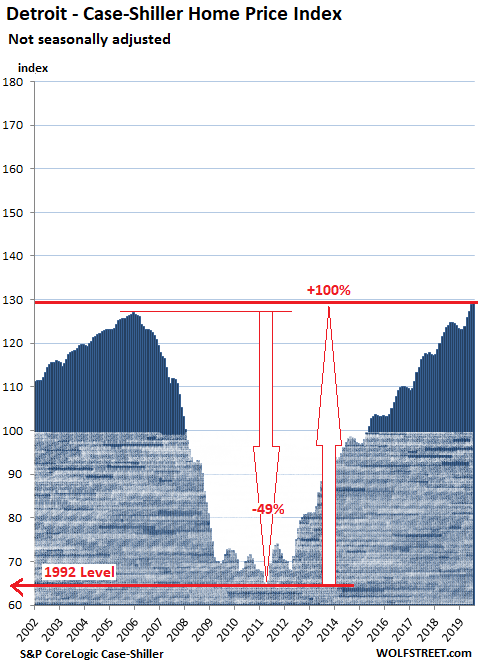 House prices in the Cleveland metro rose 1.1% in July from June and were up 3.2% year-over-year, setting a new record for the third month in a row, now up 3.2% from the old record set during Housing Bubble 1 in 2006. Since January 2000, the Case-Shiller Index for Detroit has risen 27%, which was, in our era of housing bubbles and bust, smallest such increase among the 20 metros covered by the Case-Shiller Index: 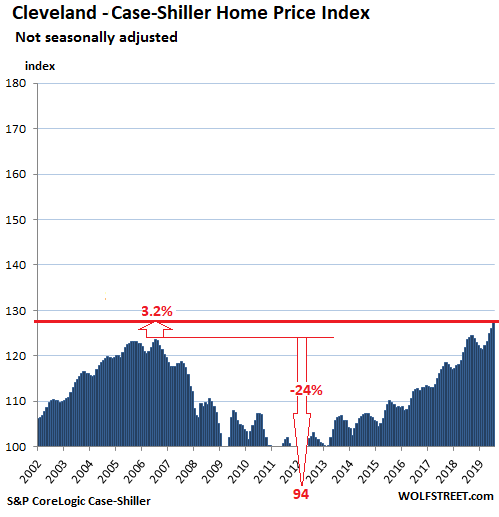 By comparison, the record biggest and fastest price increases among the 20 metros in the Case-Shiller Index is held by the Miami metro, where prices in the span of six years — between January 2000 and December 2006 — skyrocketed by 193%, before collapsing. The record for price increases between January 2000 and July 2019 is held by the Los Angeles metro, where prices over the 19-year period increased by 186%