Here’s why — and how that’s impacting truck makers.

Orders for heavy trucks that haul part of the economy’s goods across the US plunged by 80.1% in August 2019 compared to August last year, to about 10,400 orders, according to preliminary estimates by FTR Transportation Intelligence. It was the 10th month in a row of year-over-year declines, and the second month in a row of 80%-plus declines, with orders in July having plunged 81.2% to about 9,800, not seen since 2010. So far this year, these year-over-year plunges ranged from -52% to -81% off the historic boom months in 2018: 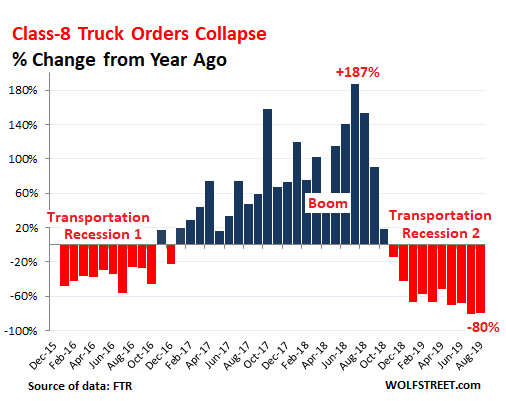 “The Class 8 market is at a turning point,” Don Ake, FTR VP of commercial vehicles, said in an emailed statement. “The huge orders in 2018 supported the robust production last year and through much of 2019. Now the economy has slowed and there are enough trucks to handle the available freight growth. OEMs are cutting production rates, eventually down to near replacement demand levels.”

During the ordering boom for Class 8 trucks in 2018, orders had peaked at over 52,000 a month in July and August, powered by fears among trucking companies that they would not have enough equipment to move all the freight resulting from the boom that turned out to be short-lived, caused in part because companies had tried to front-run the expected and announced tariffs by loading up on goods and piling up inventories.

The order volume was mind-boggling in 2018, and as companies backed off loading up on inventories and freight shipments began to decline at the end of 2018, the hangover turned out to be equally mind-boggling.

Freight shipment volume within the US by all modes of transportation – truck, rail, air, and barge – fell 5.9% in July from July last year, the eighth month in a row of year-over-year declines, after having already dropped 6.0% in May, according to the Cass Freight Index for Shipments, which tracks shipments of consumer and industrial goods but not of bulk commodities such as grains. Those two declines were the steepest year-over-year declines since the Financial Crisis:

And truckers have been responding to this new reality. FTR’s Don Ake in the statement:

“There is a tremendous amount of uncertainty in the economy right now due to tariffs and the trade war with China. Businesses are holding back on capital investment and our industry is no exception. Fleets are going to be cautious about buying new equipment in the short term. We do expect orders to increase in October. However, if freight growth is still muted and manufacturing sluggish, the big fleets may just place orders for Q1 and take a wait and see approach.”

The chart shows the sharp drop-off in orders for class 8 trucks from the phenomenal boom in 2018, down to historically very low levels where they appear to have gotten stuck for now: 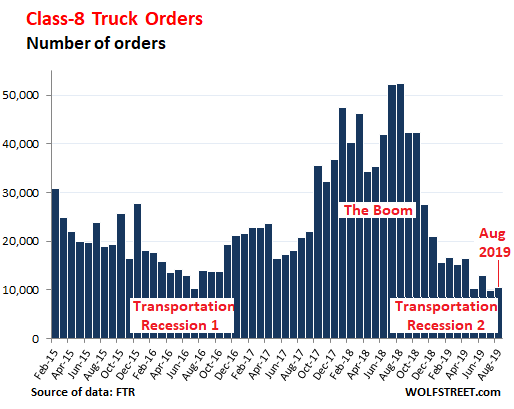 But the manufacturers of Class-8 trucks have been reporting big revenue increases. For example, truck and engine maker Navistar International [NAV] just reported that revenues in its third fiscal quarter, ended July 31, had surged by 17% from a year ago, to $3.0 billion, “primarily due to a 28 percent increase in volumes in the company’s Core market (Class 6-8 trucks and buses),” as it said.

But, but, but… two weeks ago, Navistar had announced the first set of production cuts of medium-duty Class 6-7 trucks at its Springfield, OH, assembly plant. The company blamed “the cyclical nature of the business.”

Big increases in revenues but production cuts? Yes, eating through the backlog.

It takes a long time for manufacturers to build out their historically large backlog. In terms of Class-8 trucks, 2018 generated a record backlog that truck makers are now building and delivering. And for the industry overall, truck sales surged during much of 2018 and into 2019, past the record levels set just before the Financial Crisis to over 47,000 units (seasonally adjusted) in April and July 2019.

But in August, according to the Commerce Department today, sales of heavy trucks fell from July’s record levels, to 44,500 units (seasonally adjusted). These are still all sales of 2019-model-year trucks, for which orders closed some time ago (larger chart): 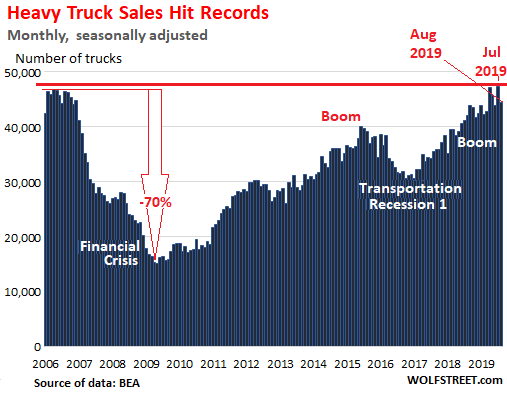 Truck manufacturers don’t disclose their order backlogs. But they have been shrinking at a rapid rate as truck makers pushed production and sales of those orders in their backlogs even as new orders have been plunging.

Sales follow orders with a long lag. And unless a miracle happens and orders begin to re-soar soon, truck makers – Peterbilt and Kenworth, divisions of Paccar [PCAR]; Navistar International; Freightliner and Western Star, divisions of Daimler; and Mack Trucks and Volvo Trucks, divisions of Volvo Group – will eventually cut production, as Navistar is already doing with medium-duty trucks, which leads to declining sales; the legendary boom-and-bust cycles of the industry.

52 comments for “Orders for Heavy Trucks Plunged 80% in August”